Ariana Grande has accused the organisers behind the Grammy Awards of "lying" and "playing games".

"I've kept my mouth shut but now you're lying about me," the singer wrote on Twitter.

Grammys boss Ken Ehrlich claimed that Ariana was struggling to put a performance together for the show, which takes place on Sunday.

"It was when my creativity and self expression was stifled by you, that I decided not to attend," she added.

The row appears to centre around what songs were expected to be included in Ariana's performance.

According to reports the 25-year-old wanted to perform her new single 7 Rings.

When the Grammys ruled against that it was suggested instead that Ariana Grande perform a medley of songs which included her latest hit.

"I offered three different songs. It's about collaboration. It's about feeling supported. It's about art and honesty," Ariana said.

"I can pull together a performance over night and you know that, Ken. I hope the show is exactly what you want it to be and more."

Ariana Grande doesn't need to perform at the Grammys to boost her sales or increase her fanbase.

By the time the show begins on Sunday evening, her fifth album, Thank U, Next will no doubt be topping the charts.

Fans are way more excited about her music videos than they are about seeing her perform live at the Grammys, especially if you aren't there.

It's a much bigger loss to the Grammys to not have the biggest pop star in the world performing at their show.

Ariana Grande's decision not to perform is the latest blow for organisers of this year's event.

Ken Ehrlich confirmed that rappers Drake, Kendrick Lamar and Childish Gambino had all turned down offers to perform.

"The fact of the matter is, we continue to have a problem in the hip-hop world," he told the Associated Press.

"When they don't take home the big prize, the regard of the academy, and what the Grammys represent, continues to be less meaningful to the hip-hop community, which is sad."

Kendrick, Drake and Childish Gambino have all been invited to the awards despite not accepting the invitation to perform - although it's unclear if they'll attend the ceremony. 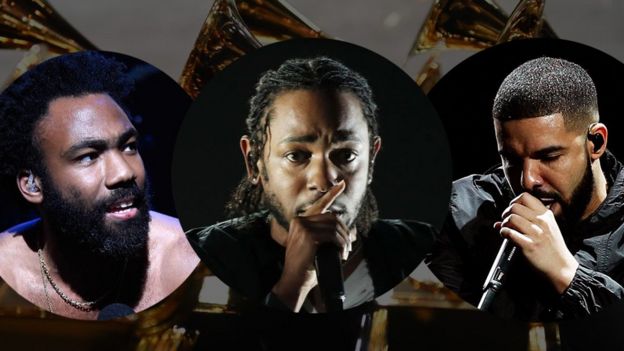 Childish Gambino, Kendrick Lamar and Drake chose not to perform at the Grammys

The ceremony will come two days after Ariana Grande released her latest album - Thank U, Next - which came out on Friday.

Kendrick Lamar and and Drake lead the nominations with eight and seven nominations respectively.

The Grammys will be held on Sunday 10 February in Los Angeles and will be hosted by Alicia Keys.

Newsbeat has contacted the organisers of the Grammys for comment.

Pop music is getting faster (and happier)

Kanye affirms he is running for president

Pink to be honored at Brit Awards
Next Item