Some photos of the show were released, but guests were banned from posting their own pictures

Rihanna's designer lingerie show was the talk of New York Fashion Week - but the A-list guests were banned from using their phones after Amazon Prime Video bagged the rights to stream it.

Those watching the star-studded catwalk show at Brooklyn's Barclays Center were not allowed to post photos before Amazon streams it from 20 September.

"You have no idea how crazy of a show is coming," tweeted the Barbadian star.

The 31-year-old singer-turned-designer attempted to "blend music, fashion and culture", with "special appearances" from models like Bella and Gigi Hadid, Normani and Cara Delevingne. 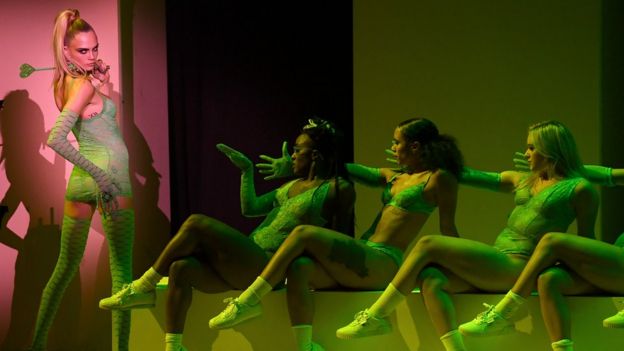 According to W Magazine, the Amazon deal was "taking fashion week into the streaming era".

The Daily Mirror's fashion commentator Amber Graafland said she thought fashion show promotion on this scale was unprecedented. Rihanna was focusing attention back on the catwalk rather than the rich and famous onlookers, she said.

"What's happened to the fashion show of late is it's all about who is there and it's the greatest show on Earth," Graafland told the BBC.

"Everybody wants the eyes of the world on their show. Now Rihanna has turned it into a piece of theatre, conceptualised it and is making people see it as she wants them to see it." 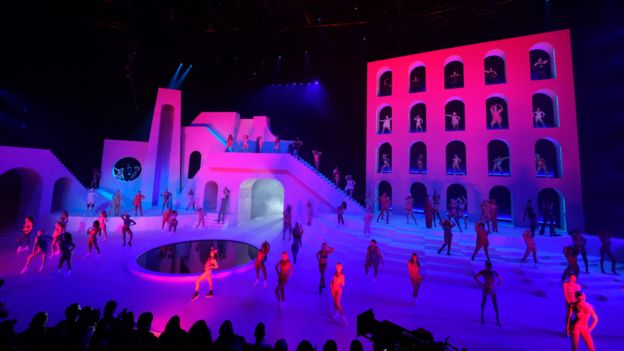 Models and pop stars rubbed shoulders on the elaborate set

Commentators compared the buzz around Rihanna's Amazon tie-up with the fortunes of Victoria's Secret, which is not staging a televised catwalk show for the first time in almost two decades after it hit a ratings low in 2018.

Victoria's Secret had been criticised for a lack of diversity, whereas one hallmark of Rihanna's Savage Fenty X fall/winter underwear range is its inclusivity, with the star saying she wants to "celebrate everybody".

Tuesday's show was choreographed by Parris Goebel, best known for her work on music videos such as Justin Bieber's Sorry.

Afterwards, Rihanna told Business of Fashion: "I love how she makes everything sexy despite society's ideal of what sexy looks. I don't care about any skinny Victoria's Secret model when I look at Parris. I want to be that woman on the inside."

Amazon Studios described the show as "a radical departure from tradition", with "exciting surprises around every corner". 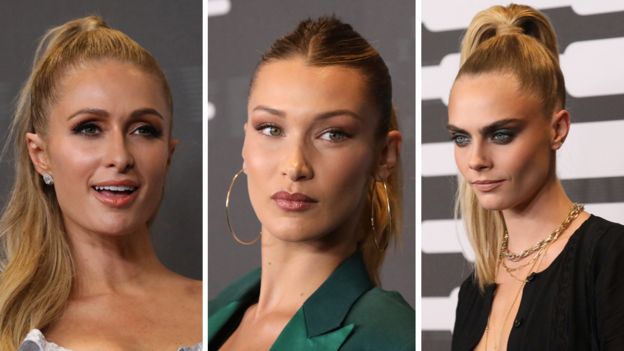 VGMA 2020 nominees to be announced

Facemasks at Fashion Week amid concern

No need for rivalry with Kaywa —Kurl Songx

The UK announces its Eurovision 2020 entry

I am a businessman, not a politician — Nacee

Fireman Sam axed for not being inclusive
Previous Item
NEXT