One thing we definitely aren't going to do in this article is give away any spoilers about Last Christmas. Apart from anything else, we're quite scared of Dame Emma Thompson.

"The correct spoiler etiquette is: don't spoil it!" the actress and writer tells BBC News after a week of critics' reviews that have revealed the ending.

"It's easy isn't it? It's like 'don't punch strangers'. Just don't spoil it. Easy. Easy rule. Not complex."

Luckily, Game of Thrones star Emilia Clarke, who plays the lead character Kate in the movie, has plenty of experience in keeping plot lines secret.

"I've never done a job that didn't involve a spoiler," she points out. "Literally, there is no job I've done. And some of them are bigger than others. But with this particular twist, there are ways about talking about our characters and the premise without going anywhere near it."

One thing that definitely isn't a secret is that the movie is based on the music of George Michael. His (and Wham's) best-known songs make up the soundtrack, and in a few cases are sung by the characters.

Arguably, the most recent Christmas-themed movie to have become an annual audience favourite is 2003's Love Actually - which also starred Dame Emma. But she says trying to make the next great festive film "wasn't her prime motivation" for co-writing Last Christmas.

"Love Actually, of course, was made by one of my best mates," she says, referring to writer-director Richard Curtis. "And I'm so happy that people are still fond of it. So we certainly weren't thinking we were in competition with anything. I just wanted to try to make a good film, which has Christmas in it. And a bit of love, a bit of drama, and just everything we could throw at it." 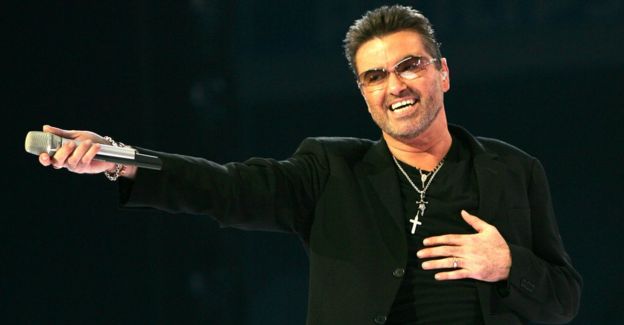 Some reviews of the film have been positive. The Mirror gave it five stars, while The Wrap said it "provides enough of a warm, fuzzy glow to light up a bleak midwinter".

It's fair to say, however, that many critics have been less enthusiastic.

"Last Christmas is the worst festive film I have ever seen," wrote Dan Wootton in The Sun. "It's a woke, remoaning, overly politically correct mess of a movie that manages to suck every inch of fun, joy and togetherness out of the season where we should be jolly."

His comments refer to the film's Brexit references, along with fact the central family are immigrants. Dame Emma's character (Kate's mother) comments that the EU referendum result makes her feel unwelcome, while one scene on a London bus shows someone telling off passengers who aren't speaking English.

But Dame Emma argues: "I think [the political references] are very lightly brushed in. Because our main character is the daughter of immigrants, it would be very difficult to tell this story without mentioning, at least, the fear that people have who are immigrants with Brexit.

"Because it's set in a very particular time as well, it's set in 2016, we couldn't avoid it. Having it not there would've been slightly psychotic. And I think what's more important about what's under the fun of the movie is a message about kindness." 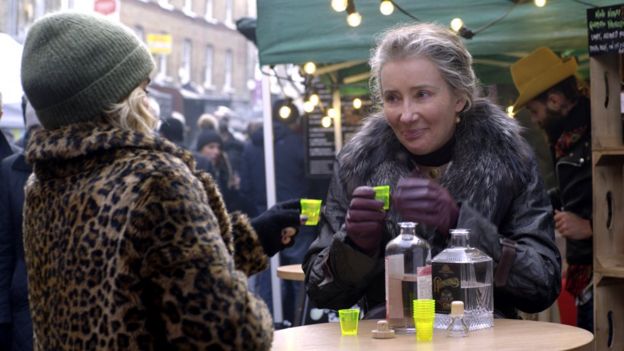 Clarke has her own policy when it comes to reading reviews. "I don't look at them at all. It's partly drama school training, and then you do a bit of theatre, and it's just not helpful," she says.

"The way I see it, right, is that I stopped Googling myself within a year of Game of Thrones happening. Because I was like, 'I don't need to know what people think about the size of my bottom, thank you so much.'

"And then when you stop Googling yourself, you then stop reading reviews. If someone says something really good, if you get a 15 million-star review, someone will tell you, and if you get a 'one-star coal in the rectum', someone's going to tell you!" She laughs while glaring at her co-star Henry Golding.

(She's referring to the rather graphic way Rolling Stone described the experience of watching the film, which Clarke says Golding drew to her attention "right before we stepped on live TV!")

Last Christmas is the latest in a string of movies that have been based on the back catalogues of a particular musical act. Queen, Bruce Springsteen and Elton John have all had the Hollywood treatment recently. "Maybe Mamma Mia put that idea on the map," Dame Emma says.

Golding, who is best known for starring in Crazy Rich Asians, says the benefit of such films is that they "spark joy, memory, nostalgia".

"Especially with Freddie Mercury and Elton John," he continues. "It's music we all grew up with, and to see what was actually happening, a glimpse of their biography, it kind of invigorates us, and makes us fall in love with that artist over and over again. 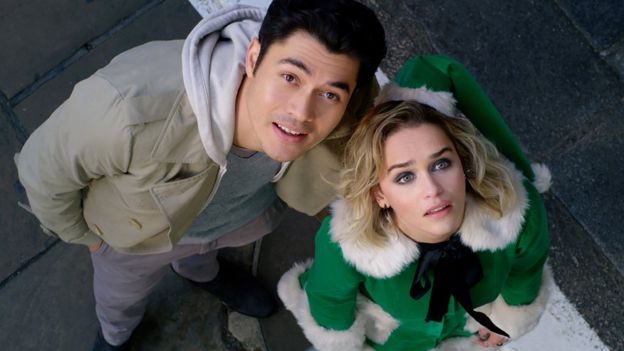 "And hopefully that's what happens with George, and a broader market gets to listen to George for the first time, which I think is going to happen."

Dame Emma met Michael before his death in 2016. The singer gave the movie his blessing, and his family and management have been involved in the production since, even gifting a previously unheard recording to the soundtrack.

"The songs just kind of slid in naturally," Dame Emma says. "I didn't realise how his poetry describes so much of the acts of self-care and kindness that this film really speaks about."

The fact that Dame Emma, along with husband Greg Wise, co-wrote the film's screenplay meant she could personally monitor how the movie was taking shape.

Phoebe Waller-Bridge, who both wrote and starred in Fleabag, was known for rewriting scenes while shooting. Was that a luxury Dame Emma enjoyed as well?

"Deffo. Absolutely," she says. "You go, 'Oh I don't think that's quite right'. Or, 'That could be funnier'. And then we make stuff up as we go. We riff a bit. So yes, it's useful to be on set, because if someone says, 'Oh that doesn't really work', you can think about something else." 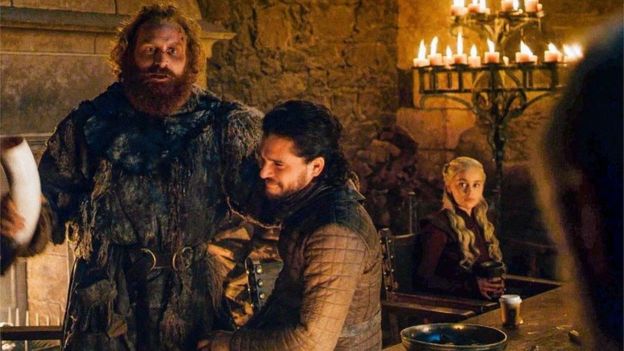 This is our first interview with Dame Emma since she personally phoned the manager of Mayfair restaurant Brown's to ask them to reinstate a waiter who was sacked for asking for a selfie with her. Has she heard whether he eventually got his job back?

"Oh yes, of course he did!" she replies. "Taking a selfie is not a sacking offence. I mean, well done Brown's for bringing it up. But the selfie thing is something we all need to talk about and think about a little bit, face-to-face."

We also have one final question for Clarke before we go, regarding the Game of Thrones coffee cup saga, which has been rumbling on for several months.

After the continuity error in the eighth season, Clarke revealed her co-star Conleth Hill had privately confessed he was the one responsible for leaving it in shot.

The day before our interview, however, he jokingly told Sunday Brunch that his guilt could not be proved.

"THAT LITTLE CHEEKY... NO!" Clarke explodes while we're only a few words into the question. "STOP! I'm not having it!"

He has, we try to continue through the laughter, playfully threatened legal action against Clarke for dobbing him in. Has she heard from his lawyer?

"No I haven't heard from his lawyer, he's going to hear from mine in a minute though!" she laughs.

And with that, we wrap up, wishing Clarke and Golding well with that evening's premiere.

"Thank you," Clarke smiles, before adding: "Let us know if Rolling Stone are going to be there..."

Help save my sight—Akpatse
Next Item