Netflix reveals The Crown viewing figures for the first time

A total of 73 million households worldwide have watched royal drama The Crown since it began in 2016, according to figures released by Netflix.

It's the first time the streaming giant has revealed viewing data for the series about the British monarchy.

The third season, which stars Olivia Colman as the Queen, was watched in 21 million homes in its first four weeks.

That was 40% more than saw the second season over the same time period, Netflix said.

"Seventy-three million households around the world have made The Crown part of the global cultural zeitgeist," Sarandos said.

On Tuesday, Netflix also announced that new fantasy drama The Witcher was watched by 76 million households in its first month. The show, about a mutated monster hunter, gave Netflix its best result yet for a first-season original TV series.

Meanwhile, the second season of You was watched by 54 million households, and Michael Bay's action thriller film 6 Underground, starring Ryan Reynolds, was seen by 83 million.

Netflix has previously revealed viewing data for Orange is the New Black reached 105 million homes over its first six seasons. 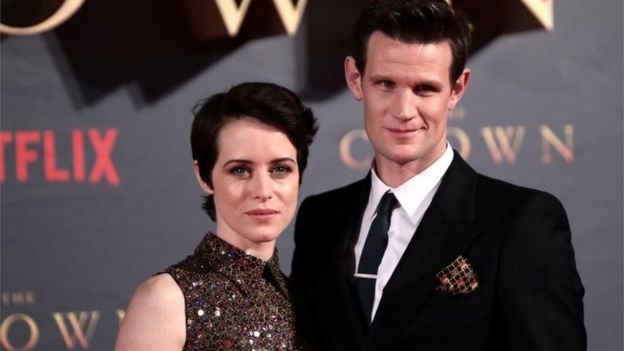 On Sunday, the cast of The Crown won the Screen Actors Guild Award for the best ensemble in a drama series. That followed Colman's Golden Globe win for best actress in a drama series at the start of January.

However, despite its accolades, series three failed to make Netflix UK's top 10 list of its most popular releases of 2019.

The top spot went to a documentary about the disappearance of three-year-old Madeleine McCann in 2007.

He said BBC drama series with smaller budgets, such as Bodyguard, were watched by more people than The Crown.

"I mentioned the Bodyguard finale reaching 17 million viewers," he told a media conference in London. "That was in one month. Our data suggests The Crown reached seven million users in 17 months."

Netflix has not broken down its viewing figures for The Crown by country.

At that time, it announced that supernatural drama Stranger Things had broken its streaming record, after 40 million households watched the show in its first four days.

Charlize hasn't 'dated for over 5 years'

Filming resumes on 'The Batman' movie

Alicia Keys: I felt I was from another planet

‘Mulan’ gets cold reception in HK