"I'm Dua, and I'll be your instructor today."

With its lycra, leotards and sweatbands, the workout video for Dua Lipa's Physical is a camp and colourful homage to the TV exercise classes of the 80s.

The track itself is heavily inspired by the disco and electronica which defined the decade's sound.

Same goes for the biggest song in the world right now: The Weeknd's Blinding Lights, with its super synth-pop keyboard hook.

The 1980s is inspiring pop music once again - and influencing artists who weren't even born then.

Its sound can currently be found everywhere in mainstream pop - from Little Mix's Break Up Song to The 1975's back catalogue to Heartbreak Weather, the title track from Niall Horan's new album.

It's perhaps most obvious throughout The Weeknd's After Hours, especially in the saxophone crescendo of In Your Eyes.

"For me the definitive 80s sound is a splashy snare and a kick drum with a lot of kick," says Tim McEwan, one half of US electronic duo The Midnight.

The group have been creating 80s-sounding pop with all the hallmarks of the decade - including big soundscapes, dreamy vocals, and saxophone solos - for years.

Known as Synthwave, it's a style of electronic music that's defined the sound of 1980s film and game soundtracks. 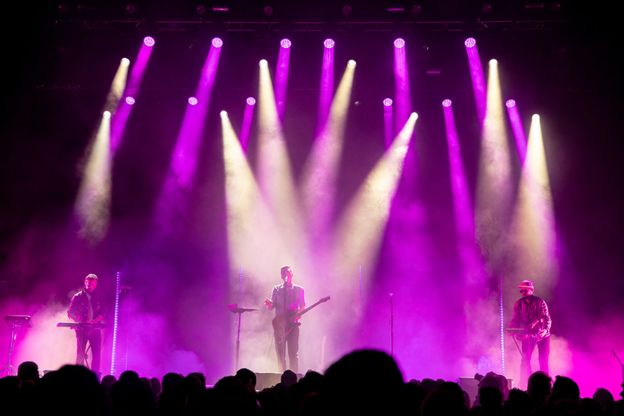 "You then throw in these dreamy synth pads which create these hyper melodic songs."

While The Midnight agree all music is cyclical, the current wave of 80s nostalgia might be because we "miss the simplicity of a different time".

"Technology has taken over to such a degree that there's something very tactile about the 80s and 90s that people are rediscovering… that could be cassette tapes, vinyl, old game cartridges."

Some of the defining pop songs of the 1980s

Madonna - Into The Groove

Whitney Houston - I Wanna Dance With Somebody (Who Loves Me)

Don Henley - The Boys Of Summer

Kate Bush - Running Up That Hill

DeBarge - Rhythm Of The Night

The 80s has always been a "significant music period" but the decade's influence" has "really stuck" this time round, according to the Independent's music correspondent Roisin O'Connor.

Born in the 1990s, she remembers finding 80s music through film soundtracks such as Back To The Future.

"We discover something our parents were into and it seems like you're discovering hidden treasure." 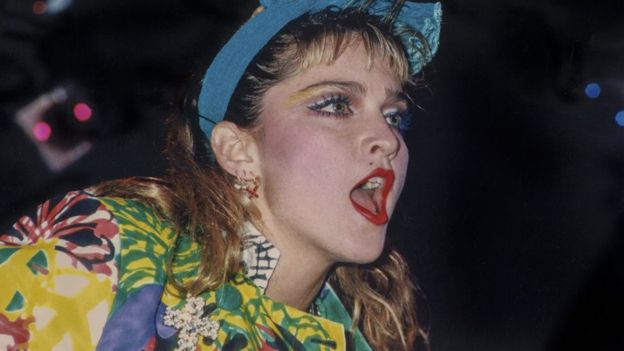 Madonna found fame in the 1980s and created a look copied by millions. She's pictured here on her 1985 Virgin tour

She says one of the qualities of the 1980s was the distinct vocals - from "the dramatic baritone of Depeche Mode's Dave Gahan to Jimmy Somerville's falsetto in Bronski Beat".

Dua Lipa's vocal on Physical reminds Roisin of Debbie Harry (from Blondie) - and says the Weeknd "is famously obsessed with Michael Jackson".

For Dutch DJ Oliver Heldens, who was born in 1995, the 80s sound is "futuristic, melancholic but uplifting".

Growing up on disco and Eurodance, he recently re-versioned the 1983 Italian dance-epic Take A Chance.

He also sampled the staccato keyboards from Yazoo's 1982 hit Don't Go on Turn Me On, his collaboration with Riton.

"Good music from the past will always be there in the future," he tells Radio 1 Newsbeat.

The hook on Turn Me On was created by Vince Clarke who - as a member of Yazoo, Depeche Mode and Erasure - helped pioneer the sounds of the 1980s. 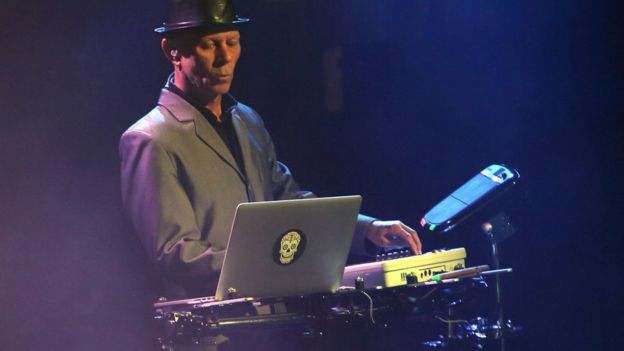 Vince Clarke still performs as one half of Erasure, who remain one of the 80s' biggest selling groups

Vince Clarke has also been a major influence in the life and career of producer and singer Jack Antonoff, who has made music with Taylor Swift, Lorde and Carly Rae Jepsen.

The pair worked together on Antonoff's Bleachers albums Strange Desire and Gone Now.

Speaking to Buzzfeed in 2014, Antonoff said: "Modern pop music should just write Vince a cheque for a billion dollars."

TV has done its bit too - with the colours and aesthetic of the Starcourt Mall in Netflix's Stranger Things acting as perhaps the most visually in-your-face representation of the 80s.

The show "came at the perfect time", according to Tim from The Midnight. "We definitely live in the same universe." 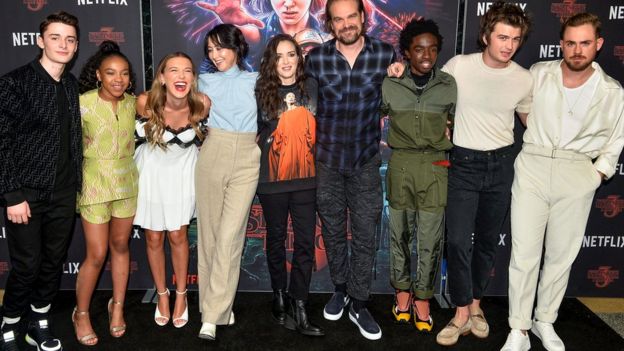 He thinks the Duffer brothers, who created Stranger Things, "nailed an aesthetic that enhances whatever else is going on around it".

"Our last album, Kids, came out in 2018 - which was around the same time as the third season. A lot of people have been rediscovering us since it came out."

The band are now preparing for the release of a new album later this year, which The Midnight's Tyler Lyle says represents their "strongest songs" to date.

"We are trying to make music that feels authentic to us."

The 80s throwback is perhaps at the peak of its influence right now and, as with anything in music, music critic Roisin O'Connor thinks that the sound could "peter out over the next year or so".

"When you have artists as big as The Weeknd and Dua Lipa doing it, you've reached your top levels. I wouldn't be surprised if artists soon try exploring other avenues.

"However, it's so significant we're never not going to hear influence from that time in our music."