A damaged vehicle belonging to the SRC

The  Winneba and the Ajumako campuses of the University of Education, Winneba (UEW) have been closed down indefinitely by the Central Regional Security Council (REGSEC).

It followed three days of violent demonstrations by some students on the North and the Central campuses in Winneba over recent happenings in the university.

Students were given up to 6 p.m. yesterday to vacate the campus.

“The closure is to ensure the protection of lives and property and the maintenance of law and order,” the Central Regional Minister, Mr Kwamena Duncan, said during a visit to Winneba yesterday.

The demonstrators caused massive destruction to properties, including school buildings and buses, and injuries to six persons, including five students and a policemen.

Mr Duncan said the situation on the Winneba campuses was too chaotic to allow students to remain there.

“The university cannot be allowed to be in session while the demonstration by the students continue,” he stated.

He said every passing day the level of insecurity on particularly the North Campus increased, since the students had not relented in their quest to pursue mayhem to register their protest against the dismissal of some of their lecturers. 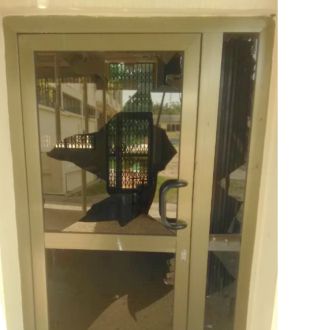 “We cannot continue to look on unconcerned, and that upon the advice of the security council, I pronounce an indefinite closure of the school until further notice and that all the students have up to 6 p.m. to vacate the campus,” he said.

The students had been protesting, since Monday, against the dismissal of some lecturers of the university by the governing council, a development which they described as unfair and an attack on academic freedom.

They boycotted lectures and expressed their displeasure about developments in the university through demonstrations.

Although the protests started peacefully, they turned violent when personnel of the Ghana Police Service on patrol in the school started firing tear gas canisters and warning shots to scare and drive the students away.

When the students realised that some of their mates had been injured, they took to their heels.

They, however, went on the rampage, destroying several properties and smashing windows of buildings in the university, as well as school buses.

Properties damaged included the main administration block, the HYPERS Department building, the Food Processing Unit, the Home Economics Department and notice boards on both the North and the Central campuses.

The entire North Campus went into a frenzy when the Member of Parliament (MP) for Effutu, Mr Alexander Afenyo-Markin, in the company of Mr Kennedy Agyapong, the MP for

Completion of irrigation schemes this year