Some 26,083 people, 10,890 of them children, have been rendered homeless following the continuous rainfall in the Upper East Region.

The National Disaster Management Organisation (NADMO), which confirmed the figures, also said the death toll from the rain disaster was 19.

The region experienced torrential rains between October 1 and October 11, this year, leading to flooding, collapse of buildings and structures, deaths, destruction of properties and displacements.

The Vice-President, Dr Mahamudu Bawumia, yesterday toured parts of the region to assess the situation, commiserate with bereaved families and empathise with those who lost their properties, stored food items and farms to the torrential rains.

His first port of call was Mayoro, a community in the Kassena Nankana municipality, after he had been briefed in Navrongo.

The Vice-President was accompanied on his tour by the Minister of the Interior, Mr Ambrose Dery; the Northern Regional Minister, Mr Salifu Saaed; the Minister of Aviation and Member of Parliament for Navrongo Central, Mr Joseph Kofi Adda, and some NADMO officials.

Dr Bawumia said the government was determined to find a permanent solution to the annual flooding of the region with the construction of the Pwalugu Multipurpose Dam.

He explained that the government was doing everything in its power to “assist you go through these difficult times; we are with you here today and tomorrow because the Presidency and all government functionaries are deeply concerned about the disaster".

He used the occasion to task all metropolitan, municipal and district assemblies (MMDAs) to help find ways of supporting the people to build stronger houses that could withstand bad weather conditions and disasters for years. 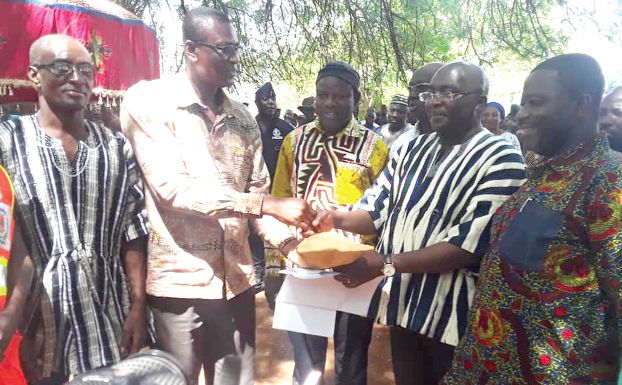 On behalf of the government, the Vice-President donated GH¢50,000 to help address the immediate needs of those affected by the floods.

Furthermore, he gave an assurance that the government was bringing additional relief items which were to arrive yesterday for distribution to the affected people.

The Chief of Mayoro, Pe Dr Atudiwe Atudipaare Pwakweah Manchi III, for his part, expressed gratitude to the Vice-President for his visit to the community, saying that by that gesture, “you have demonstrated to us that you are our brother and you have the whole nation at heart”.

He said the disaster that occurred was as a result of natural causes, for which “our community is honoured that you, as our brother, has come to empathise with us”.

Some of the victims expressed their gratitude to the government for the support.

Mr Adda also made a personal donation of GH¢5,000 to the affected people.

The Vice-President was expected to later tour the Tono Irrigation Dam in the Kassena Nankana municipality.

Meanwhile, in an interview with the Daily Graphic last Friday, the Upper East Regional NADMO Director of Operations, Mr David Mba, expressed misgivings about the conflicting reports regarding the number of dead people, as sections of the media had quoted 27, 28 or 29.

“These figures I’m giving you are certified and due diligence has been followed in collating them,” he explained.

Mr Mba explained that in the Kassena Nankana West District, for instance, the number of deaths recorded was four, but some figures put out suggested that the number recorded in that district was 11, which he described as untrue.

He said the deaths resulted from drowning, lightning strikes and, in some cases, buildings collapsing on people.

He equally disputed some reports that suggested that coffins and caskets were seen floating on flood waters in some areas, saying: “Our men were on the ground and so I wonder where those reports are coming from.”

He said 5,328 buildings had totally and partially collapsed in the 13 districts in the region.

The rest are the Pusiga, Binduri, Garu, Tempane, Bongo and Talensi districts.

Touching on what NADMO was doing to quickly bring relief to the affected people, who are currently putting up in schools, churches and area council buildings, Mr Mba said the organisation had started distributing an “emergency stock” to the affected in Kassena Nankana West, Kassena Nankana and Builsa North, which he said were among the hardest hit areas.

He indicated that NADMO was working round the clock to ensure that the affected people, some of whom had little or no food to eat, were reached as soon as possible because the region expected some more relief items from Accra to beef up the little NADMO had.

Mr Mba further said NADMO was liaising with the Ministry of Food and Agriculture to collate the number of farmlands and farmers who were affected by the disaster.

Meanwhile, the Upper East Regional Manager of the Ghana Red Cross Society, Mr Paul Wooma, has noted that as part of its Psycho Social Support Services, Disaster Risk Reduction Volunteer groups have been deployed to collate data on the casualties and the people affected, so that a request letter will be written to the International Federation of the Red Cross and other international donor agencies for support.

COVID: The mystery of 'silent spreaders'

Govt to close down religious institutions if…

Covid: What's the future for the office?