President Nana Addo Dankwa Akufo-Addo has urged Africans in the Diaspora who have gained Ghanaian citizenship to preserve and promote the image of the country, which is considered the most stable on the African continent.

He said Ghana was also the beacon of democracy in Africa, governed by the rule of law, and had respect for individual liberties, human rights and accountability.

The President further charged them to respect and abide by the laws of the country and to live in accordance with the tenets of its Constitution.

President Akufo-Addo made the call at a ceremony at which members of the African Diaspora Community swore oaths of allegiance as citizens of Ghana at the Jubilee House in Accra last Wednesday.

The 126 Diasporans, mostly from the Caribbean and African Americans, swore the oath of allegiance administered by a Circuit Court judge, Ms Priscilla Dapaa Mireku.

While some swore by the Holy Bible and the Quran, others affirmed their loyalty by placing their right hands on their chests, with some raising their designer walking sticks.

The President later shook hands with them and hugged some of them, after they had been presented with certificates by some Ministers of State, including the Chief of Staff, Mrs Akosua Frema Osei-Opare, and the Director of Diasporan Affairs, Mr Akwasi Awua Ababio.

The ceremony was witnessed by the ambassadors of the USA, Colombia and Cuba and the High Commissioner of Nigeria. 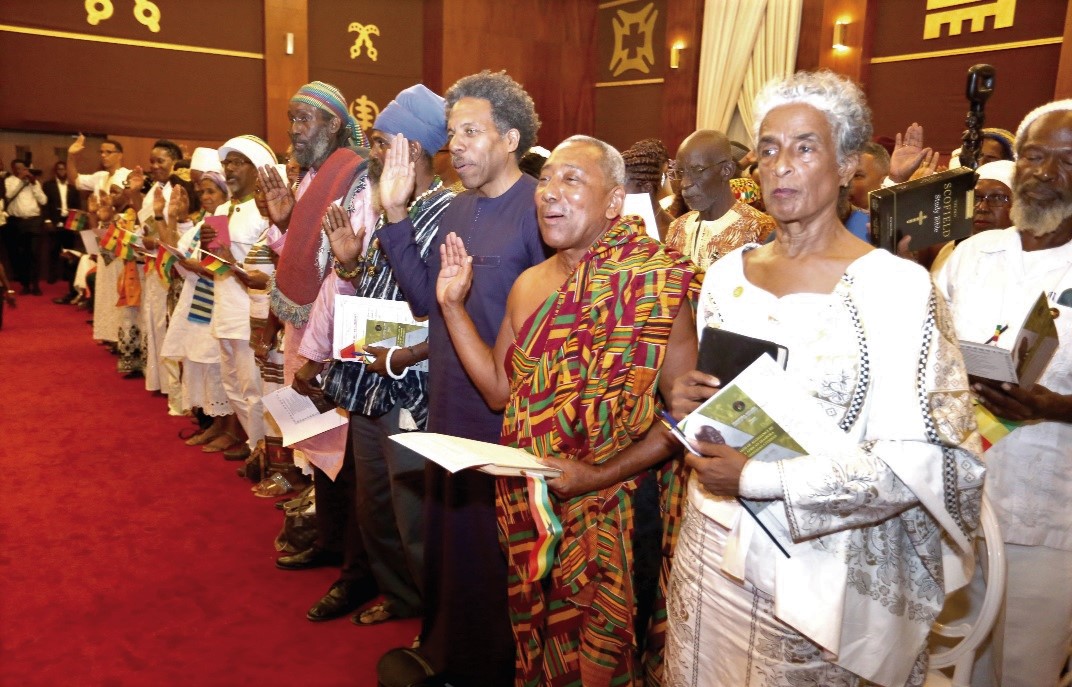 President Akufo-Addo said Ghana attained its current status due to the laudable acts and deeds of both past and present generations of Ghanaians, adding: “In all your actions, I urge you to guard jealously our country's image; it is a charge I am confident you will uphold.”

He said to facilitate their reintegration processes, they could learn at least one Ghanaian language of their choice.

The President recounted a line from a song by a popular Jamaican reggae musician, Peter Tosh, which says: “I don't care where you come from, as long as you are a Black man, you are an African.”

That drew applause from the new Ghanaian citizens and their family members who had filled the Banquet Hall of the Jubilee House.

The song which contains that particular line was later played out to the excitement of all.

President Akufo-Addo explained that the ceremony was part of a series of activities to commemorate the Year of Return marking the 400th anniversary of the arrival of the first enslaved Africans in the Commonwealth of Virginia, which became part of the United States.

He paid glowing tribute to the late Jake Otanka Obetsebi-Lamptey, a former Minister of State, who championed an initiative dubbed: ‘Joseph Project’, aimed at reconciling Africans on the continent and those in the Diaspora, among other objectives.

The President further reiterated his call for a Ghana and Africa Beyond Aid by discarding the mindset of dependency and living on handouts and using Africa’s human and material resources to build robust economies.

“This economy could give a dignified standard of living to Africa's 1.2 billion people, expected to reach two billion by 2035, and propel it into the ranks of developed nations of the world,” he added.

The Minister for the Interior, Mr Ambrose Dery, entreated the new citizens to contribute their quota to the development of the country and cautioned that those who would flout Ghana’s rules and regulations would be made to face the full rigours of the law.

The Spokesperson of the Diasporan Coalition, Mr Rabbi Kohain, commended President Akufo-Addo for the bold step in granting them their long-cherished desires of coming back to their ancestral abode.

He said their identity that was stolen from them about 400 years ago had been restored and was sure that the spirits of their ancestors who were taken as slaves to the Americas and the Caribbean,were with them at the ceremony.

GAF investigates cause of aircraft overrun

Research into food safety in begins
Next Item