Farmers all over the country were on the occasion of the National Farmers Day last Friday celebrated for their contributions to the nation’s economy and for feeding the population.

Special awards were given to deserving farmers and fishermen based on their practices and output.

But all said and done, farmers in the country face severe constraints on farming and food production and this needs to be addressed to encourage them to produce more.

It is important that duty bearers take into consideration the concerns of farmers and find ways of assuaging their uneasiness.

Famers in urban areas in the Greater Accra Region, for instance, are losing large tracts of arable and pasture lands following their conversion into other uses.

The agricultural lands in the region are mainly given up for estate development, manufacturing and other engineering activities which have combined to push farmers far away in search of lands for farming.

These were the common concerns raised at many of the Farmers Day events held in metropolitan and municipal areas and districts in Accra and Tema.

The Tema West Municipal Director of Food and Agriculture, Mr Alfred Nii Ayi Clottey, has stated that agricultural lands had been taken over for non-related activities such as estate development and siting of industries.

He said the situation was worrying as many farmers in the municipality had been thrown out of job.

Mr Clottey added that the municipal department of agriculture was promoting home gardening through the use of containers for vegetable cultivation as a means to mitigate the challenges farmers in the municipality were encountering,

"We are confident that together we can re-design the concept of agriculture and with the prime objective of modernising farming in the municipality,” he said.

For her part, the Tema West Municipal Chief Executive, Mrs Adwoa Amoako, said the assembly saw agriculture as a catalyst for economic growth and development, so it had put in place innovative ways of developing the sector by implementing the government flagship programmes such as Planting for Food and Jobs, Rearing for Food and Jobs which were focused on improving yields, increasing access to markets, reducing post-harvest losses and enhancing extension service delivery to address the major challenges farmers were facing.

He first began as a grass-cutter farmer and later added crop cultivation.

He currently owns a 12-acre farm near the Valco Area in Tema Newtown on which he cultivates maize.

He also has a farm in Agogo in the Ashanti Region.

Mr Eshun appealed to the assembly and the Tema Metro Office of the Department of Agriculture to help him with a borehole for irrigation. 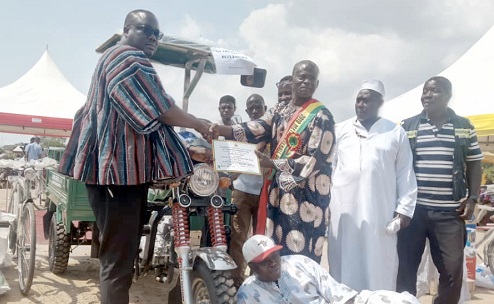 The Municipal Chief Executive (MCE) of Ga Central, Dr Emmanuel Lamptey, said the municipality was implementing the government’s Planting for Food and Jobs programme and had received 13 agriculture extension officers and trainees from the Nation Builders Corps (NABCo) who were carrying out intensive agriculture extension services focusing on peri-urban farming.

He said the problem farmers in Ga Central Municipality faced was the lack of arable lands for farming, which as a result was holding people back from engaging in large-scale farming in the area.

Dr Lamptey expressed his appreciation to farmers and fishermen in the municipality for their enormous contributions for the growth of the area and the country at large.

Samuel Duodu reports that the Municipal Chief Executive (MCE) for Savelugu, Hajia Ayishetu Seidu, on the occasion of Farmers Day appealed to the youth in the municipality to take advantage of the various agricultural flagship programmes introduced by the government and venture into farming to create jobs for themselves and others.

She reiterated the commitment of the government to modernise agriculture so as to increase productivity to achieve food security and enhance the income of farmers.

Hajia Ayishetu disclosed that the government, through the assembly, had provided 10,000 cashew seedlings for about 250 farmers to cultivate on 100 hectares this year under the Planting for Export and Jobs (PEJ) programme in the municipality.

The Member of Parliament (MP) for the Savelugu, Alhaji Abdul-Samed Gunu, commended the farmers for their contribution towards food security in the country and assured them of the government’s continuous commitment to address their needs.

The Savelugu Municipal Director of Agriculture, Alhaji Ahmed Mohammed Adam, said farmers worked hard to ensure food security in the country but the full impact of their labour and effort were yet to be translated into monetary terms due to low income from their yields.

Interacting with the Daily Graphic on the occasion, some farmers in the Northern Region said inadequate access to credit to enable them to expand their farms, soaring cost of high grade planting seeds, agro chemicals, insufficient number of harvesters and lack of warehouse and storage facilities continued to be a challenge they faced.

Meanwhile, Kwadwo Baffoe Donkor reports from Asokwa in Kumasi that the Municipal Chief Executive, Mr Akwannuasah Gyimah, commended farmers for their hard work which had ensured food security in the country.

He said even though the municipality was urban, with commerce as the main occupation, farming was also vibrant.

Mr Gyimah added that Asokwa was a leading producer of vegetables in the country and also had large poultry farms.

He urged the youth to get involved in farming since agriculture held the potential for prosperity, adding that the government had provided a conducive environment for agriculture with the hope of reducing the country’s import bill.

From Nsoatre in the Bono Region, Biiya Mukusah Ali reports that the Municipal Chief Executive (MCE), Mr Martin Obeng, said the government had made significant investments in agriculture not only to improve food security but also to make raw materials available for agro-processing and subsequently for export.

The Municipal Fire Commander, Assistant Divisional Officer (ADO) Mr Alfred Brocke, warned the volunteer squad in the area against settling cases involving people who had been arrested for starting bushfires.

He cautioned against extorting money from suspects and rather allow the law to take its course.

He also sent an appeal to private stakeholders to partner the government to equip fire stations so they could effectively fight fires in the municipality.

In Bolgatanga, Naaba Edmund Atia Adindaa, who was adjudged the Overall Best Farmer in the municipality, thanked the government on behalf of the other award winners for rolling out various interventions to boost farming, especially for the subsidies on fertiliser and for making other inputs and extension services available to farmers, reports Vincent Amenuveve.

The Bolgatanga MCE, Mr Joseph Amiyuure, and the Municipal Director of the Department of Agriculture, Dr Bernard My-Issah, both commended the farmers for their hard work and promised to support them to increase crop production in the Upper East Region.

Shirley Asiedu-Addo reports from Cape Coast that the MCE, Mr Ernest Arthur, said the many interventions introduced to promote the work of farmers and fishermen proved that the government was appreciative of farmers’ contribution to the nation’s development.

From Kpong in the Lower Manya Krobo Municipality, the Municipal Chief Executive, Mr Simon Kweku Tetteh, who addressed the farmers, mentioned a number of interventions the government had introduced to enhance agriculture in the country.

Ezekiel Sottie reports that he urged people in the municipality to patronise local rice being produced at Akuse to boost the local economy instead of buying imported rice.

The Lower Manya Krobo Municipal Director of Agriculture, Mr Godswill Komla Glante, said the government was subsidising fertiliser for farmers to help them improve their work.

He appealed to the assembly to repair some of the roads leading to the farming communities to enable them to cart their farm produce to the marketing centers.

The Deputy Eastern Regional Minister, Mr Samuel Nuertey Ayertey, who chaired the function, commended the award winners and farmers in the municipality for their efforts to feed the population and pledged to lobby for farmers to get more farming inputs to enhance their work.

Let's address all sources of tensions

Child abuse amid COVID is preventable

“Beyond the Return” committee expanded

Use moisturizers as often as sanitizers

Karpowership will save $170.5 mn annually
Previous Item
NEXT