Two metropolitan and municipal assemblies, transport unions and traders in the Western Region have instituted tough measures to reduce the number of passengers on “trotros” and taxis and decongest markets as part of measures to control Covid-19.

The Sekondi-Takoradi Metropolitan Assembly (STMA) and Effia- Kwesimintsim Municipal Assembly (EKMA) said the move was to protect the citizenry.

Breaking bulk
The two assemblies have also agreed that traders should break bulk at designated opened areas in Sekondi, Takoradi and Effia as part of Covid-19 safety protocols.

The directive, which takes immediate effect, means taxis operating within the jurisdiction of the two assemblies shall take three passengers – one front and two back instead of four.

Commuter buses, trotros, mini-buses and others which take three or four passengers per row, are directed to reduce from three to two and four to three passengers respectively on a row with one passenger in front instead of two.

Guards
Speaking to the media the Public Relations Officer of the STMA, John Laste said the directive, which would be enforced by its security – STMA guards, and the police will ensure the safety of passengers and curb possible spread of the coronavirus.

He urged passengers to as much as possible reduce the rate of talking while in commercial vehicles, wash or sanitize their hands before boarding and after alighting. 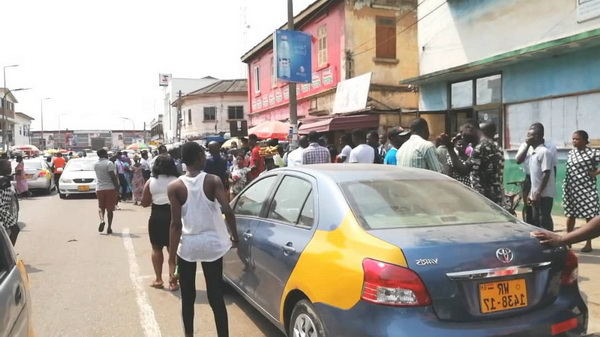 Insist on numbers
He said the decisions were arrived at by the assembly in conjunction with various driver unions, “therefore passengers are advised to report or insist on the above seating directives in case a driver or driver’s mate decides otherwise.”

He said at the same meeting were the leadership of various markets where they took the decision to reduce congestion in the major markets in the municipality and the metropolis.

The markets
At the Takoradi Central Market (Market Circle), all bulk breaking activities should be relocated to the Takoradi Jubilee Park with effect from Wednesday, April 1, 2020 till further directives.

“With this we mean no trading activities will be permitted at the inner and outer perimeters of the market circle. All traders who will be affected by this exercise at the Market Circle would be given a temporary space at the Jubilee Park.”

At the Sekondi Market, he said all the second-hand clothes and shoe dealers who flood the market and the street on Tuesdays are being relocated to Ekuasi Park, a few meters from the market.

Median not for trading
“Other traders selling within the median from Commercial Bank to Star Night will be relocated to the park close to the Independence Circle (Enamasi) and traders would not be allowed to sell or display goods within the median,” he said.

Other traders selling outside the market, he said, would be directed to observe the social distancing protocol and at Kojokrom Market, all bulk breaking activities will be relocated to the Kojokrom Community Park, while dealers in some selected commodities would be relocated from the market to other locations in due course.

Mr Laste explained that since there are reported cases of both vertical and horizontal spread of the pandemic, the two assemblies would not wait until it hits the region.

STMA & EKMA
“In both STMA and EKMA we are arguably the first to receive visitors from both our neighbours in Cote d’Ivoire and the national capital, therefore our move is first to prevent,” he said.

He said the assembly did not just impose the directive on the transport sector or the traders in various markets in the metropolis and the municipality.

“Our series of meetings with the leadership of transport unions and various markets within the metropolis resulted in the decisions and the implementation of measures on social distancing protocol in commercial vehicles and markets.”

The move, he said, had the support of the Metropolitan and Municipal Chief Executives of STMA and EKMA, Messrs Anthony K. K. Sam and Kojo Acquah respectively, who took turns to address the meetings after which participants were also given the opportunity to ask questions or contribute to the discussions.

Child hawkers
In a related development, the STMA has arrested and detained children hawking in and around the various markets and transport terminals.

Mr Laste said at the central business district of Takoradi, the team arrested 32 children whilst forty-one (41) children were arrested in Kojokrom.

“The particulars of the children who were arrested and their parents were taken and cautioned. The assembly would like to warn parents whose children will be arrested on two occasions that they will be arraigned before court,” he said.

The joint security and STMA monitoring team, he said, would continue the operation at the other markets within the Metropolis. They will also ensure enforcement of directives on public gatherings, closure of beaches, provision of hand washing facilities and compliance of social distancing at the banks, restaurants, transport terminals and all other institutions.

Laughter; Get Your Daily Dose

COVID– Why You Need An Online Tutor

COVID: Young may be scarred throughout life

COVID measures must be enforced in schools