Soldiers announced they had seized power on state television

The coup attempt in Gabon is the first there since the 1960s.

The government has said the plot has been defeated and the situation is "under control".

President Ali Bongo is currently receiving medical treatment in Morocco after having a stroke. His family have ruled Gabon since 1967. 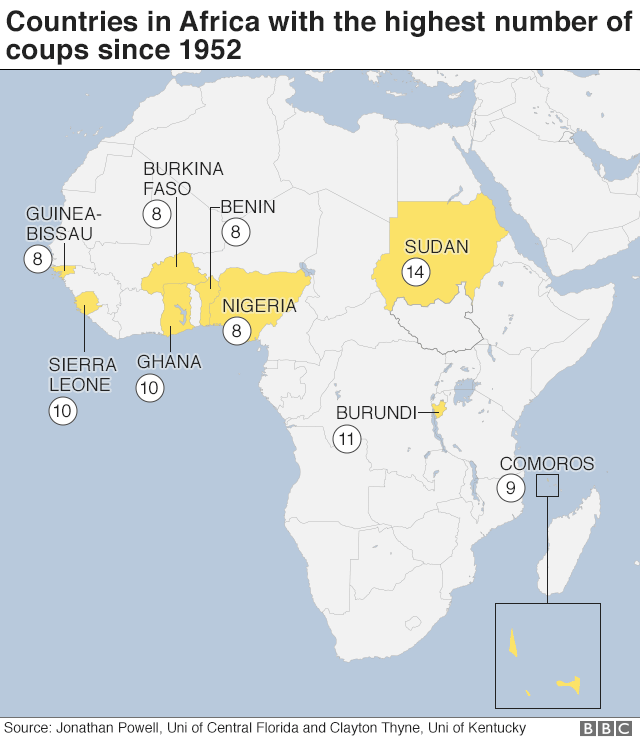 But is the continent shaking off its reputation for coups?

When is a coup a coup?

Since the 1950s, there've been a total of 204 coups d'état - successful or otherwise - in Africa, according to a dataset compiled by two US political scientists, Jonathan Powell and Clayton Thyne, who are based at the University of Central Florida and the University of Kentucky respectively.

Their definition of a coup is that they are illegal and overt attempts by the military or other civilian officials inside the state to unseat sitting leaders.

However, the definition of coup is often contested and in the past, military leaders have denied they're conducting them.

Take, for example, Zimbabwe in 2017. The military mounted a takeover to put an end to Robert Mugabe's 37-year rule. At the time, a top military official, Maj Gen Sibusiso Moyo, went on television to deny flatly that it was a military takeover.

"Coup leaders almost invariably deny their action was a coup in an effort to appear legitimate," says Powell. 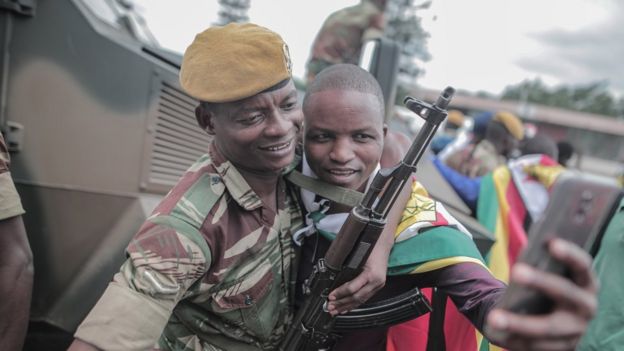 Celebrations after the Zimbabwe army intervened against President Mugabe in 2017

Powell and Thyne regard a successful coup as one that lasts longer than seven days.

In Africa, there have been 104 failed coups and 100 successful ones.

Is Africa having fewer military takeovers?

Africa has certainly had a high number of military takeovers, but this particular way of forcing change is declining. 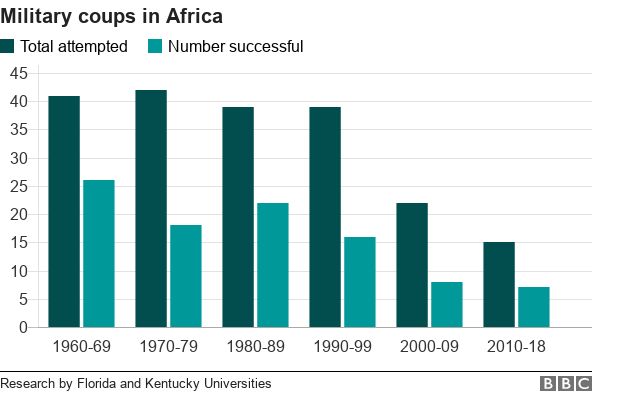 Powell says this is not surprising given the instability African countries experienced after independence.

"African countries have had the conditions common for coups, like poverty and poor economic performance.

"When a country has one coup, that's often a harbinger of more coups," says Powell.

And historically in African countries, the militaries have generally played a more active role in transitions of power and domestic issues and security.

Globally, the total number of coups stands at 475.

So Africa has experienced more coups than anywhere else.

Next is South America which has had 95 attempted coups, 40 of which were successful. 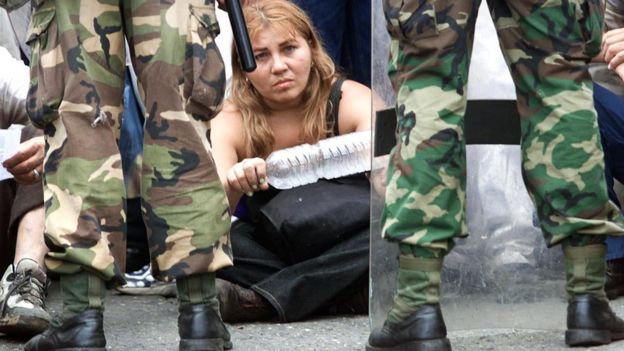 However, in the past two decades there has been a decrease in South American coups. The last coup was in Venezuela in 2002 against President Hugo Chavez, which failed.

Powell says the end of Cold War dynamics which saw the US and Soviet Union meddle in Latin American affairs as well as the willingness of the international community to sanction countries which have coups, like Haiti in 1994, has led to the decline of military takeovers.

Asia has also had a decline in coups.

Solution to problems is in NDC manifesto

Day of mourning in Lebanon

Norway suspect was known to police

US to donate more vaccines to Africa

Recognize the efforts of Boadu, others

MMDCEs in GAR to be sworn in today