Zimbabwe: Has the economy stopped declining?

Zimbabwe has not had its own independent currency for a decade, relying instead on the US dollar and a local money system pegged to the dollar.

But is he right? Reality Check looked at the country's key economic indicators before and after the currency was reintroduced.

It's true the economy is no longer in the extreme inflationary spiral seen in 2008, but there continue to be severe shortages of food, medicine and fuel.

Fears of a return to hyperinflation

The introduction of the new currency came at a sensitive time.

There was understandable concern that bringing back the Zimbabwe dollar would lead to a return to the chaotic hyperinflation which destroyed savings and made wages worthless.

This is nowhere near the spiralling inflation levels of a decade ago, but the trend has not been encouraging.

We don't have the inflation figures for July as the authorities have said they won't be publishing annual inflation data until February 2020.

There's also debate about whether the official number accurately captures the increase in goods on shop floors and at petrol stations, for instance.

Leading economists say it's likely the cost of living is higher than official figures indicate.

Zimbabwe's exchange rate with US dollar

Since the introduction of the new currency on 24 June, it has fallen against the US dollar.

But any positive effects are likely to be outweighed by more expensive imports, leading to further inflationary pressures on the economy.

The weaker currency is likely to have an impact across the economy, as importers struggle to get access to foreign exchange such as the US dollar in order to buy goods from abroad.

Taking a longer term view, the government has reduced spending since October last year and is now running a budget surplus, which it says is an indication of an improving economy.

Independent economists are sceptical about these numbers. 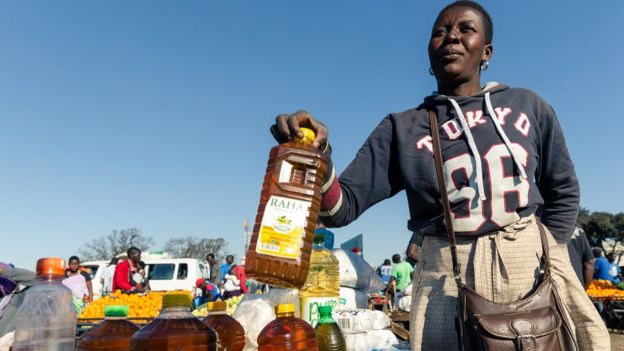 Harare, Zimbabwe - where the price of goods has increased

Public sector workers in Zimbabwe are paid in local currency and there are fears that because of its decline against the US dollar, and because of inflation, they are now, in effect, earning less.

Zimbabwe's main public sector workers' union, Apex Council, said in a petition that the value of earnings has fallen "from at least $475 to a mere $47 currently for the lowest paid civil servant" since October last year.

Unions have, however, agreed a one-off payment of 400 Zimbabwean dollars ($45) to every worker in July, while talks on pay continue.

IS says it was behind twin blasts

We are shocked at the SC timelines

Liberian senator cuts his own salary
Previous Item
NEXT

Greenland tells Trump it is not for sale
Next Item