The shooting in Halle happened outside a doner kebab shop

At least two people have been killed in a shooting in the eastern German city of Halle, police say.

One person was arrested, police said, but other suspects were believed to have fled the Paulus area in a vehicle.

A second shooting was then reported in Landsberg, some 15km (9 miles) east of the city. It was not clear if the incidents were connected.

It was not clear where the arrest took place. Police are still warning residents to remain in their homes.

A witness told German n-tv news that a gunman in camouflage opened fire with an assault rifle on a Turkish kebab shop.

"The man came up to the doner shop, he threw something like a grenade, it didn't explode, and he opened fire with an assault rifle. The man behind me must have died... I hid in the toilet," the witness told a TV reporter near the scene. 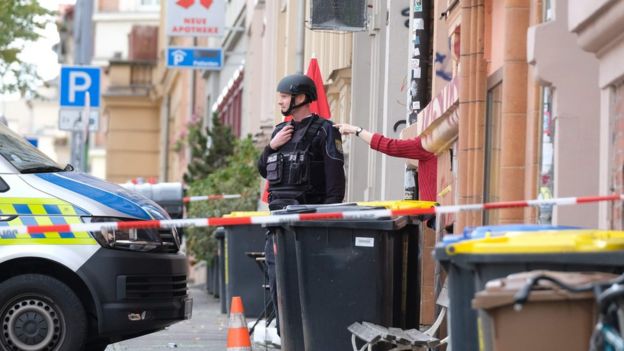 Police have cordoned off the area in Halle

Shots were also fired near a synagogue in Halle, according to German media, but details have not been confirmed.

A suspect tried to get into the building, Max Privorotzki, leader of the Jewish community in Halle, told Der Spiegel magazine, saying between "70 and 80 people were in the synagogue".

One witness said one attacker "dressed like a policeman... fully armed" had thrown a petrol bomb or grenade over a cemetery wall. 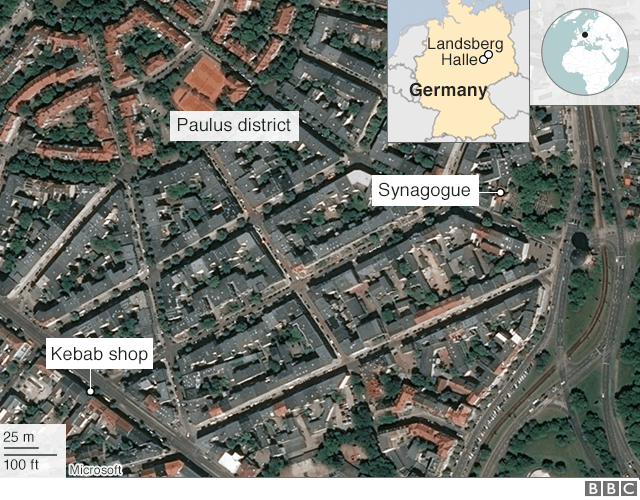 Tanzanian comedian out on bail