Hong Kong leader Carrie Lam has been forced to suspend her annual address after being heckled in parliament.

Opposition lawmakers disrupted the Legislative Council session by shouting and projecting slogans behind her.

After a first interruption, the session resumed only to be interrupted again. It was then suspended - and Ms Lam delivered the address by video instead.

It means the extradition bill - the trigger for months of protests - could not be withdrawn formally.

The bill was suspended in July, but Wednesday's meeting was the first time the Legislative Council (Legco) had resumed since it was stormed by protesters in July, and was the first opportunity to withdraw the bill altogether.

But as Chief Executive Lam was about to begin her speech, opposition lawmakers began shouting and climbing on tables.

They also projected the words "Five demands - not one less" on the wall behind her. Since the protests began, they have widened from rallies against the bill to five key demands - including universal suffrage. 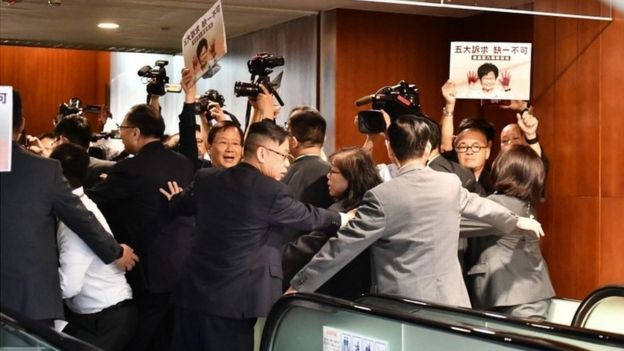 "Both her hands are soaked with blood," she said. "We hope Carrie Lam withdraws and quits. She has no governance ability. She is not suitable to be chief executive."

It was the first time a Hong Kong chief executive had been unable to deliver a policy address in the chamber.

Pro-establishment lawmakers condemned the interruption of the session - saying the address was important for Hong Kong's economic future.

After the assembly was suspended, a pre-recorded speech was made available on the Legco website instead.

In the address, Ms Lam stressed her commitment to "one country, two systems" - the parallel political system introduced in Hong Kong after British rule ended - and said calls for Hong Kong independence would not be tolerated.

She announced several housing and infrastructure policies, saying housing was the most urgent issue the city faces.

In a news conference after the address, Ms Lam rejected claims that her speech ignored the demands of the protest movement.

But she said it was not the time to consider voting reform, while insisting Hong Kong did have freedom of speech and freedom of the press without Chinese interference.

The developments came just hours after Hong Kong protesters won a show of support from US lawmakers, who passed a bill aimed at upholding human rights in the city.

Carrie Lam hoped this moment might signal the beginning of the end for Hong Kong's political crisis.

The cover page of her policy address was bright blue, she said, to represent the clear skies ahead. But the first full session of Hong Kong's parliament since it was stormed by protesters in July was cut short.

Other leaders in other places might have faced them down. But Hong Kong's limited form of democracy doesn't produce that kind of pugilistic politician, able to appeal over the heads of opponents to the public at large.

Which is of course the central point at the heart of the deep divisions splitting this society apart.

The tightly-managed political system seen as a source of stability and strength by supporters - like the ruling Communist Party in Beijing - is seen as a threat and a fundamental weakness for those taking to the streets to argue against it.

What are the Hong Kong protests about?

Hong Kong is part of China but, as a former British colony, has some autonomy and people have more rights.

The protests started in June against plans to allow extradition to the mainland - which many feared would undermine the city's freedoms and judicial independence.

The government in September promised the bill would be withdrawn once parliament resumed but demonstrations continued.

Demands have since widened into five key demands:

In a conversation with the EU representative in Hong Kong earlier this week, Ms Lam reportedly ruled out even debating universal suffrage in the current climate. 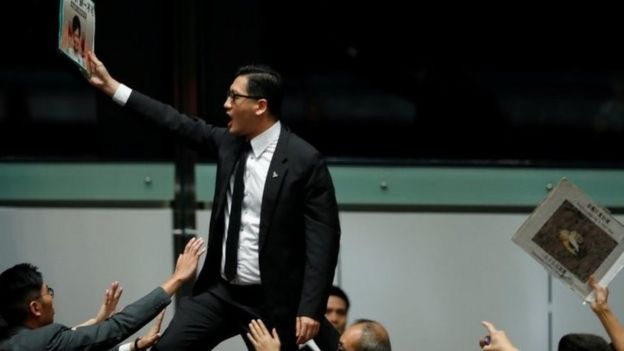 Protests have taken place every weekend over the past month and in every district, causing widespread disruption.

How did the protests escalate?