A submarine that has been missing for almost 80 years has been found.

HMS Urge left Malta for the north coast of Egypt on 27 April 1942 and was never seen again.

The vessel, which was adopted by the people of Bridgend during World War Two, was officially reported missing in the Mediterranean on 29 April 1942.

A marine archaeology survey team from the University of Malta made the discovery.

"It's sitting upright on the seabed, very proud, in the direction it was ordered to take on its way to Alexandria," he told BBC Breakfast.

The university said its search results had "established beyond doubt that on 27 April 1942 HMS Urge struck a German mine when leaving the British submarine base at the height of the siege of Malta by German and Italian forces in WW2". There were no survivors.

The university added that the wreck was "at a depth of 427ft (130m) on the sea bed, her deck gun facing forward".

The Ministry of Defence said it recognised the wreck site "as the last resting place of HMS Urge and those who lost their lives in service of their country".

It said it was "grateful" to the team that found it and requested that "the vessel is undisturbed and in situ".

In 2015, it was mistakenly thought the submarine had been found off the Libyan coast. 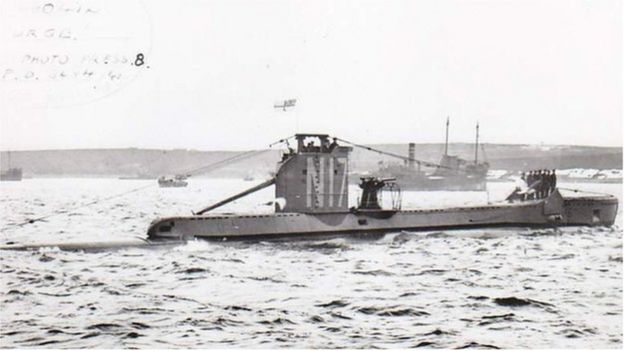 A ceremony is expected to be held next year, when the wreck site will be declared an official war grave.

Francis Dickinson, who was part of the search team, is the grandson of HMS Urge's commanding officer, Lt Cdr Tomkinson.

"My family have always wanted to know where HMS Urge and her gallant crew's resting place is," said Mr Dickinson.

"Thanks to this project, we now know where and how this submarine was lost after achieving so much."

In 1941 there was a national "warship week" which raised money to meet the costs of providing military machinery and vehicles for the war.

Bridgend contributed about £300,000 to the fund and the town adopted the submarine HMS Urge along with two other warships.

PM tells France 'not to let down guard'