Hundreds of people have attended the first funerals for members of a Mormon community in northern Mexico who died in an ambush by gunmen.

Mexican soldiers guarded the entrance to La Mora village as dozens of vehicles with US number plates arrived in a convoy.

The first funerals were for three of the nine victims - Dawna Ray Langford and her two sons, aged 11 and two.

The other victims are expected to be buried later.

Initial investigations by Mexican authorities suggest the attack was a case of mistaken identity by a drugs cartel, but the victims' families dispute this.

Sonora state in northern Mexico is being fought over by two rival gangs, La Línea, which has links to the larger Juárez cartel, and Los Chapos, which is part of the Sinaloa cartel.

What happened at the funerals?

Amid tight security, about 500 mourners gathered beneath white marquee tents in Rancho La Mora and took turns to file past the coffins.

Some sang hymns and others wept. 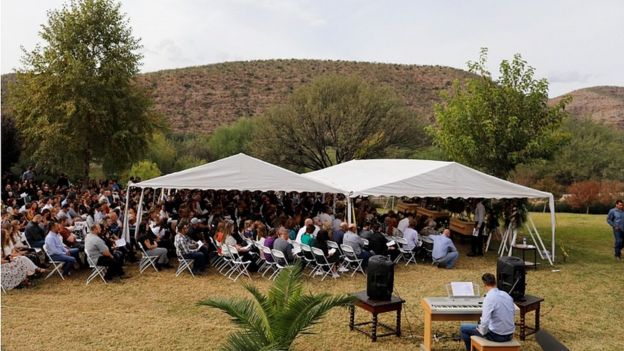 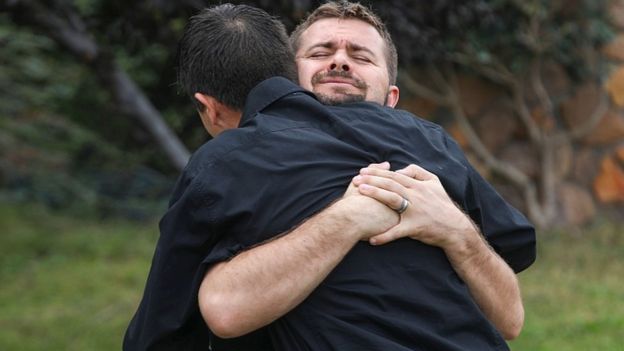 "We have come to honour their memory and to try to understand what is happening," said Alex LeBaron, who led the convoy of vehicles.

Three families - the Langfords, Millers and LeBarons - are part of a large group of US Mormons who moved to Mexico in the late 19th Century, fleeing persecution for their traditions. All the victims were joint US-Mexican citizens.

Dawna Ray Langford and her sons were buried in hand-made coffins in a single grave dug by members of the community. 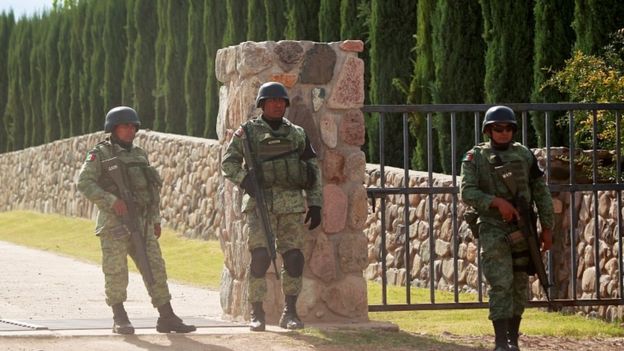 Soldiers guarded the entrance to the ranch in Sonora state

"The eyes of the world are upon what happened here, and there are saints all over this world whose hearts have been touched," Dawna's father, Jay Ray, said in a eulogy quoted by the Associated Press.

The Governor of Sonora state, Claudia Pavlovich, attended the funerals.

How did the ambush happen?

On Monday morning, a group of three mothers and their 14 children set off in three cars from the La Mora ranch, to go to another Mormon settlement, Colonia LeBaron, in neighbouring Chihuahua state.

But shortly after leaving, all three cars were ambushed at different points by gunmen near Bavispe.

Five of the victims - 30-year-old Rhonita Maria Miller and her children: eight-month-old twins Titus and Tiana, 12-year-old Howard Jr and 10-year-old Krystal - died after their car was targeted by gunmen. At some point, the vehicle caught fire and exploded.

Dawna Ray Langford and her sons Trevor, 11, and Rogan, two, were killed in another car while Christina Langford Johnson, 31, was killed in the third vehicle.

Her seven-month-old baby, Faith Langford, survived the attack. She was found on the floor of the vehicle in her baby seat.

Ms Langford Johnson reportedly got out of the vehicle with her hands raised to ask the attackers to stop shooting but was gunned down, witnesses said.

Dawna Ray Langford's son Devin, 13, managed to escape their car with six of his siblings. They hid in bushes. He then walked for six hours back to La Mora, relative Kendra Lee Miller wrote on Facebook. Some of the children suffered bullet wounds and are being treated in hospital.

Who carried out the attack?

While Mexican officials say the convoy of cars may have been mistaken for that of a rival gang, the families say they have been targeted by cartels in the past.

In statements to local and international media, the relatives suggest they may have been punished by La Linea for living in relative calm alongside a gang called Los Salazar, a splinter from the Sinaloa Cartel.

In 2009, Erick LeBaron was kidnapped for ransom. The community took a stand and said it would not pay for his release as that would just encourage future kidnappings.

Erick LeBaron was eventually released without a ransom being paid. But months later, his brother Benjamin was beaten to death. Benjamin's brother-in-law was also killed. 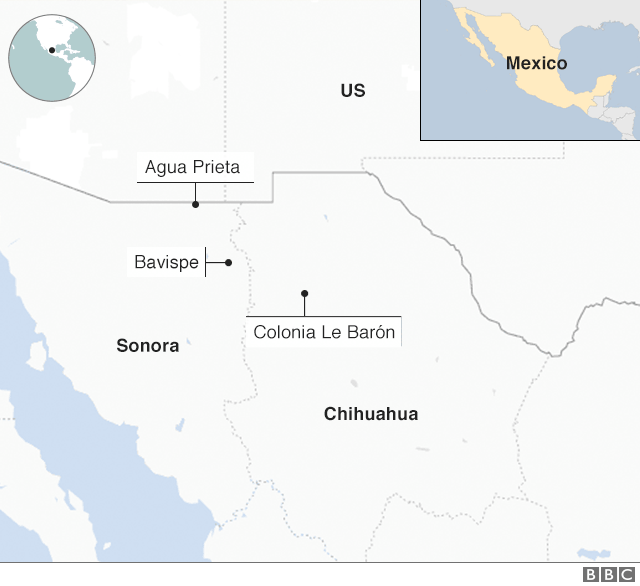 Election of MMDCEs is a compliment - IDEG
Next Item