John Kieti mobilised a community to campaign against air pollution

John Kieti always made sure that the windows of his apartment were shut tight and all the curtains closed.

It was his way of keeping out the stench and polluted air in Syokimau, a neighbourhood close to Kenya's capital, Nairobi.

The pollution was affecting the health of his two children.

"We decided enough was enough. We couldn't take it in any more," he told the BBC.

"Every day, we woke up to the stench and dusty air. The children in the estate started developing breathing problems."

Syokimau is a middle-income neighbourhood, home to more than 5,000 people, many of them staying in two- or three-bedroom apartments.

But there are several factories - among them a steel mill, a cement manufacturing plant and an asphalt factory - dotted across the community, sitting close to residential blocks. 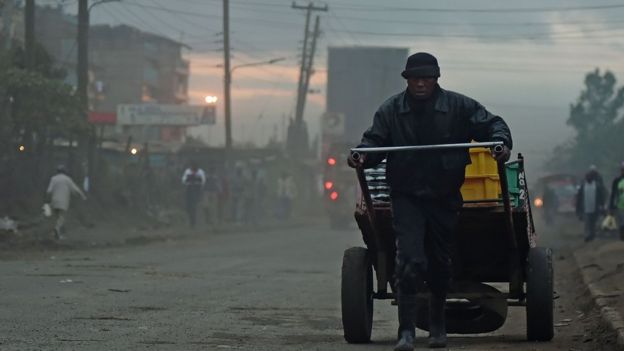 Mr Kieti, along with his wife and children, lives near the asphalt factory that used to release dense fumes into the air, blanketing the area in dark smoke.

Overall, the WHO reports that the level of fine particulate matter is 70% above the recommended maximum level in Nairobi. It is a toxic mix caused by heavy fumes from old cars, burning rubbish and factories.

'The results were shocking'

"The pollution was too much. Most of my neighbours relocated to other estates," Mr Kieti says.

He decided to mobilise the community and started a campaign to have the factory closed.

But he lacked the data that accurately showed the level of pollution that the industrial plant was causing.

"I reached out to a friend at an NGO that had air pollution sensors. We managed to get three sensors which we installed in different areas around the community."

"Our data is accurate, which means that anyone in any city will be able to use it. They can get real-time local data that they can use to petition governments to solve problems that they face around air pollution," Code for Africa's Yazmin Jumaali says.

"The results were shocking. The measurement indicator... showed that the air was heavily polluted," Mr Kieti recalls.

The air pollution sensors measure the amount of fine particulate matter (PM2.5), which are particles of 2.5 micrometres and smaller in diameter - about 20 times smaller than a grain of sand and small enough to get into the blood stream.

That data is then transmitted to a website, where it can be accessed for free by anyone.

"We would wake up in the middle of the night to monitor the quality of air [and] we would take screen shots that we would use as evidence in our campaign," says Mr Kieti.

In June, he and other members of his community launched a social media campaign sharing the data they had gathered.

"We made the National Environment Management Authority very uncomfortable by tagging them in the social media messages."

The media then picked up on the campaign, covering several stories on air pollution. Not just in Mr Kieti's area but all over the Kenyan capital.

About 30 minutes' drive from Syokimau is a family that fears that their daughter was a victim of pollution.

Rashidah and Nazir Hakada live in Sawada Estate, which also has several factories.

They are still mourning their two-year-old daughter Hafsah who died in June after succumbing to acute respiratory tract infection, a condition in which the lungs are so inflamed that they cannot provide vital organs with enough oxygen.

Doctors associate the breathing in of high concentrations of smoke or chemical fumes as a potential cause of the condition. 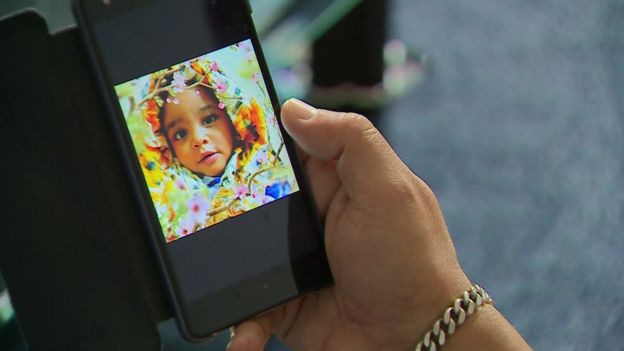 "Our daughter got breathing problems. She was admitted first in April. They discharged us. They once again admitted us in June because of the same problem. She only spent 48 hours there and she died," Mr Hakada says.

The couple have two other children, and one of them was also recently admitted to hospital with breathing problems.

"Look at all these inhalers," Mrs Hakada says angrily as he sorts through the asthma pumps. "It is too much for him. He is only six years old.

"When he coughs, he coughs for the whole week. He is such a small boy and very weak."

Mr Hakada and other community members have installed sensors in their neighbourhood. And just as in Syokimau, they are using the data for their campaign to demand clean air.

'The stench is no more'

They have drawn inspiration from Mr Kieti as his work gathering the data got results.

"We finally had the attention of the environmental officials who had earlier on ignored us," he says.

"They came and inspected the factory, talked to the community members and ordered the factory to close until they put in place air filters."

Now, the sensors are recording much lower levels of pollution.

"We were happy that our campaign paid off. The stench and heavy fumes are no more.

"The rate at which our children were getting sick from chest infections is getting lower," he says, smiling as he speaks about their achievement.

Angola to attract more FDI in 2020
Next Item