HSBC has said it will axe around 35,000 jobs as it announced profits for 2019 fell by about a third.

The bank's interim chief executive, Noel Quinn, said HSBC would scale back its headcount from 235,000 to about 200,000 over the next three years.

It said the fall in profits was mainly due to $7.3bn in write-offs related to its investment and commercial banking operations in Europe.

The 35,000 job losses are deeper than expected, and represent about 15% of the workforce. Analysts had expected about 10,000 jobs to be cut.

The bank currently operates in more than 50 countries across North America, Europe, the Middle East and Asia. It employs more than 40,000 people in the UK, where it has its headquarters. 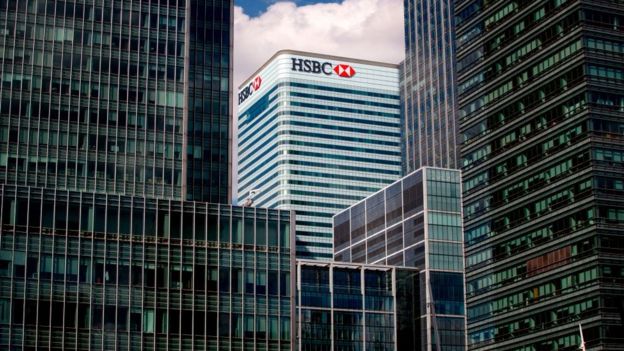 HSBC has said some of the cutbacks will be in its European and US investment banking businesses, although it has not been specific about where the job cuts will fall.

Are the job losses as severe as they sound?

Set up in 1865 to facilitate trade between Asia and Europe, the Hong Kong and Shanghai Banking Corporation, to give it its full name, is moving back to its roots.

With most of its profits coming from Asia - and with an expectation that the region is the best bet for long term prospects - the bank's cuts will focus on its European and US operations.

At present the bank is not detailing exactly where the cuts will come, but the interim boss, Noel Quinn, says reducing the workforce from the current 235,000 to "nearer 200,000" would be consistent with the £3bn or so he wants to save by 2022.

There are four key areas that are likely to be affected: the UK investment bank, the group's central operations, the US retail banking outfit and - as in many businesses - those areas where jobs are being replaced by technology.

With one in seven jobs set to go globally, employees may face an anxious time - but with HSBC seeing a turnover of 25,000 staff per year, the compulsory cuts may not be quite as brutal as they sound.

Peter Hahn, banking expert and former dean of the London Institute of Banking & Finance, told the BBC's Today programme: "I think they were too optimistic about their chances of their success in investment banking.

"The reality is that the biggest investment market in the world is the US, and if you're not big in the US in investment banking it's pretty tough to succeed in that business - and they're not."

The strategy overhaul comes as economic growth is slowing in HSBC's major markets. Asia now accounts for about half of HSBC's revenue and 90% of profits.

The bank is also facing the impact of the coronavirus, the UK's protracted withdrawal from the European Union and historically low interest rates around the world. It will be the UK-based bank's third overhaul in a decade as it attempts to lift its profits.

Mr Quinn told Reuters that the restructuring would mean "that our headcount is likely to go from 235,000 to closer to 200,000 over the next three years".

The 57-year-old HSBC veteran was appointed interim chief executive in August last year following the ousting of John Flint. HSBC reiterated that it expects to make a permanent appointment within the next six to 12 months.

Addressing the impact of coronavirus, HSBC said the full effect had not been fully accounted for in its latest earnings, raising the possibility that it could increase the amount it expects the outbreak to cost the bank.

HSBC will also reduce the assets it owns by more than $100bn by the end of 2022 as part of sweeping reforms.

We need system change for better Ghana
Next Item