Javier Pérez de Cuéllar, pictured at the UN headquarters in New York in 1991

During his two terms as UN Secretary General, he brokered peace agreements in Latin America, Africa, Asia and the Middle East.

A key achievement was negotiating a ceasefire between Iran and Iraq in 1988 after eight years of conflict.

António Guterres, the current UN Secretary General, said in a statement that he was "profoundly saddened" by the news.

"He was an accomplished statesman, a committed diplomat and a personal inspiration who left a profound impact on the United Nations and our world," Mr Guterres added.

In a tweet, Peru's President Martín Vizcarra called Mr Pérez de Cuéllar "a full-hearted democrat who dedicated his entire life to work to enlarge our country". 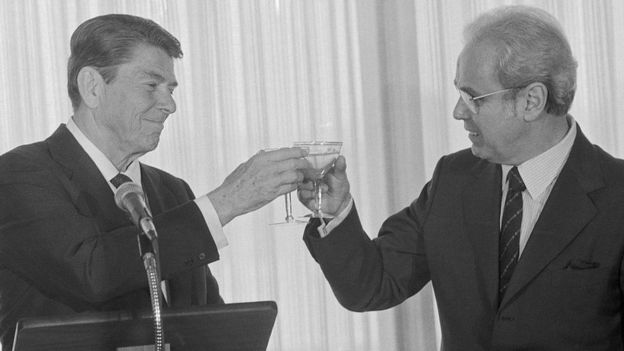 Mr Pérez de Cuéllar, pictured with former US President Ronald Reagan, led the UN during the final years of the Cold War

Mr Pérez de Cuéllar studied law at the Catholic University of Lima before embarking on a diplomatic career with Peru's foreign ministry.

He served in embassies across Europe and Latin America, and joined Peru's delegation to the first UN General Assembly in 1946.

At the UN he presided over the influential Security Council and, as a special representative, brokered a peace deal between Greece and Turkey in 1974, following the Turkish invasion of Cyprus.

In 1981 he was named as the UN's fifth secretary general - its first from Latin America - and led the international body during some of the most critical years of the Cold War between America and the Soviet Union.

Aside from the Iran-Iraq war, by the end of his second term in 1991, he had helped to end hostilities in Western Sahara, and civil wars in El Salvador, Cambodia and Nicaragua.

As UN chief, he also secured the withdrawal of Soviet forces from Afghanistan, and mediated Namibian independence from South Africa.

He made an unsuccessful bid for Peru's presidency in 1995, losing to the country's deeply divisive leader Alberto Fujimori.

The country's newly-elected President Alejandro Toledo later appointed him as ambassador to France.

A funeral is planned for Friday.

Uganda tests all ministers for COVID

Former officials to be prosecuted over SHP

Videos of police brutality shock US

Libya gov’t 'back in full control of Tripoli'