Many streets in Venice were virtually deserted over the weekend

Italy's government has pledged to further increase spending in a "massive shock therapy" to offset the economic impact of the coronavirus outbreak.

The country is struggling to adapt to the most restrictive measures since World War Two, introduced on Sunday.

Up to 16 million people in northern Italy now need permission to travel under quarantine rules.

With 366 deaths now confirmed, Italy is the worst-hit country in the world after China.

In a separate development, six people died in a prison riot in the city of Modena, following protests at the new restrictions, local media report. There were also riots at several other prisons in northern Italy. 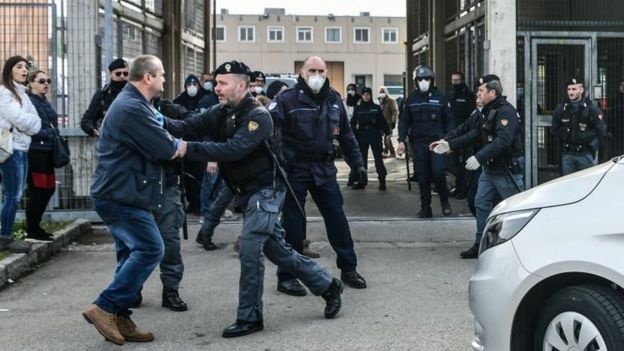 On Monday, there were scuffles outside a prison in Modena, one of the areas in quarantine

In Modena, officials say prisoners set fire to a cell block after they were told that visits would be suspended. It is thought that at least two of the dead lost their lives to drug overdoses after they raided the prison hospital for the heroin substitute methadone.

Cases of the virus have been confirmed in all 20 Italian regions, with the total number of infections now at 6,387.

The coronavirus causes the Covid-19 disease. In severe cases, patients have pneumonia, severe acute respiratory syndrome, and multiple organ failure that can lead to death.

How is the government responding?

On Monday, Prime Minister Giuseppe Conte said the government would pump in more money to mitigate the impact of the outbreak.

He also said Italy would overcome the virus if people followed the rules, adding that the sacrifices required were for the good of all.

On Monday morning, the main share index in Milan, the industrial powerhouse at the heart of the worst-affected area, opened down more than 8%.

What are the restrictive measures?

The strict new quarantine measures will last until 3 April, the government says.

They affect a quarter of the Italian population, and centre on the rich northern part of the country that powers the economy.

The UK Foreign Office advises against all but essential travel to these areas.

All schools and universities in the area are shut, as well as museums, cinemas and swimming pools. 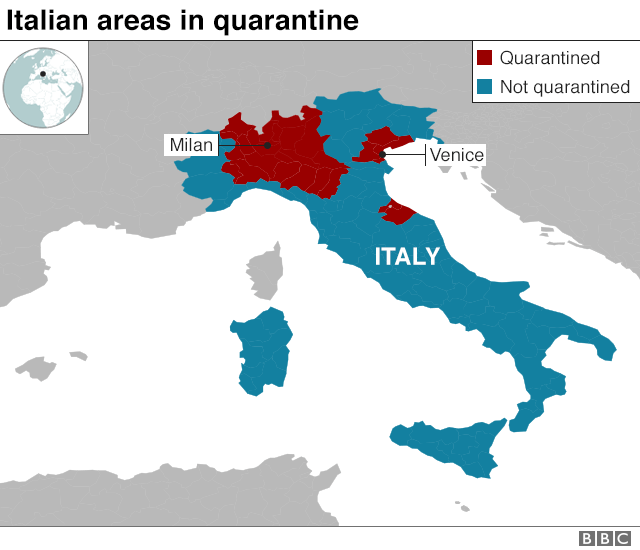 The government says only those with a serious work or family reason that cannot be postponed will be allowed in or out of the quarantine zone.

Passengers departing on flights, except temporary visitors, will have to justify themselves, as will all those arriving by plane.

There are controls at train stations to check temperatures.

Cruise ships are forbidden to dock in Venice.

The health system is under immense strain in Lombardy, a northern region of 10 million people where Milan is the main city. Regional hospitals are running short of beds and treating patients in corridors.

The health ministry says the average age of deaths from the coronavirus is 81.4 years.

Italy has one of the world's oldest populations. The virus is particularly dangerous for the elderly and those with underlying health conditions.

Until Sunday only about 50,000 people in northern Italy had been affected by quarantines.

On Sunday, we drove up to the edge of the exclusion zone. We were expecting to see roadblocks or controls in place and we didn't see anything at all.

Cars were going in both directions. It seemed as though the control of this restricted zone was quite loose, and that was a bit difficult to understand.

Is this simply too big an area to control and close off in the heart of Europe, or are the restrictions gradually coming into place? 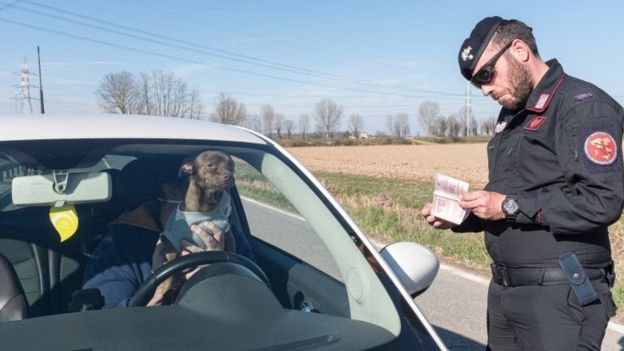 We've seen pictures from inside the restricted cities, and the streets are very deserted, but we're not seeing police checkpoints as such.

But perhaps this is going to be stepped up in the coming days because there are even penalties of three months in prison or a fine of €206 (£179; $235) for breaking the rules.

The real fear is that, in the hours between the quarantine being announced and it coming into effect, people have gone from more infected areas in the north down south.

There are healthcare facilities in southern Italy, far less developed than those here in the north, that are going to seriously struggle.

What is the situation elsewhere?

China, which has recorded the highest number of fatalities, reported no new locally transmitted infection outside of Hubei province, where the outbreak began, for the second consecutive day.

Although this indicates that the spread there is slowing, senior officials warned against reducing vigilance.

Trump 'tries to divide us': Mattis

ECHO, UNICEF to ensure care for kids in Niger