Spain has the second-highest number of deaths related to coronavirus

Spain has recorded another 864 deaths related to coronavirus, the highest in one day, as the total number of deaths across Europe has gone beyond 30,000.

More than 9,000 people have died in Spain, which is second only to Italy in fatalities caused by the virus.

Confirmed cases in the country have passed 100,000, but numbers show the infection rate continues to fall.

The warning comes amid dire predictions about the possible economic impact of measures imposed to fight the virus. A UN report estimates that up to 25 million jobs could be lost around the world as the result of the outbreak.

The number of confirmed cases globally is now over 870,000, with more than 43,000 deaths, according to data compiled by Johns Hopkins University in the US.

Wednesday's number of deaths in Spain was marginally higher than the 849 announced the day before, and the country has now seen more than 800 deaths for five days in a row. But health officials believe the latest 12% increase in daily infections is further evidence that the rate has stabilised.

Spain has been in lockdown for over two weeks, with further restrictions on movement introduced two days ago. But health services in the hardest-hit areas, including Madrid and Catalonia, are still struggling, with shortages of medical equipment a particular problem. 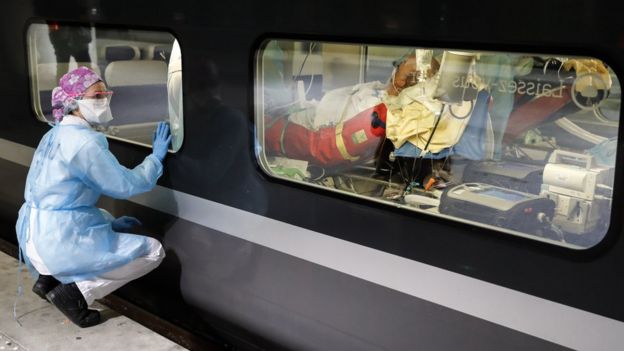 The number of deaths in the US has now topped 4,000, and Iran says Covid-19 - the disease caused by coronavirus - has claimed 3,000 lives. Belgium said more than half its intensive care beds were occupied as it reported a rise of 123 deaths, bringing the country's death toll to 828.

Meanwhile France reported 509 deaths from Coronavirus in the last 24 hours, bringing the total to 4,032. It is the fourth country to record more than 4,000 fatalities after Italy, Spain and the US. The total number of confirmed cases is now 56,989, up about 9% from Tuesday.

The UK on Wednesday recorded 563 deaths in 24 hours - it is the first time its daily toll has been higher than France's. However Britain's overall death toll, 2,352, is still lower.

What did Mr Guterres say?

Speaking at the UN headquarters in New York Mr Guterres said: "The new coronavirus disease is attacking societies at their core, claiming lives and people's livelihoods".

He said it could bring a recession "that probably has no parallel in the recent past".

"Covid-19 is the greatest test that we have faced together since the formation of the United Nations," he said, calling for "an immediate co-ordinated health response to suppress transmission and end the pandemic".

Mr Guterres urged industrialised nations to help those less developed, or potentially "face the nightmare of the disease spreading like wildfire".

Manufacturing output in the UK in March hit its lowest point since 2012, and unemployment in Austria has soared 52.5% on March last year to its highest level since 1946. The crisis has not yet filtered through to Italian job levels with unemployment in February slightly down at 9.7%.

What are the latest developments around the world?

President Donald Trump warned of "a very, very painful two weeks", as modelling by the White House's coronavirus task force estimated that between 100,000 and 240,000 people could die in the coming months.

What lessons should world learn from outbreak?

The coronavirus pandemic is stress-testing all institutions - national and global - and many are struggling to perform effectively in almost unprecedented circumstances.

There is an unseemly competition for scarce medical equipment. But experts at the Rusi think-tank in London are already looking to the future.

They argue the world needs a whole new kind of institution to deal with so-called "black sky hazards" - natural or man-made disasters that are of such a scale that they disrupt the whole global system of interdependent supply chains on which human life depends.

The authors, Karin von Hippel and Randolph Kent, say there is no current organisation to coordinate the sharing of information and policy options in the way that the World Health Organization covers public health.

They suggest a new body established by the UN, but not part of it, to provide a forum for promoting discourse and solutions for ever more entangled problems of global consequence. The aim, clearly, is to be better prepared next time.

US 'considers cloth face masks for public'
Next Item