Coronavirus: US set to recommend wearing of masks

The White House is expected to advise Americans in coronavirus hotspots to wear cloth masks or scarves in public to help stop the virus spread.

President Donald Trump said such an advisory would not be mandatory.

Residents of New York, the epicentre of the US outbreak, have already been urged to cover their faces in public.

Top health official Dr Anthony Fauci has said he believes all states should issue stay-at-home orders, as the US death toll passes 6,000.

"You've got to put your foot on the accelerator to bring that number down," he added, referring to infection and death rates.

The comments from Dr Fauci,who heads the National Institute of Allergy and Infectious Diseases, appear to contradict those of Mr Trump, who has consistently dismissed the notion of a nationwide lockdown.

"It's awfully tough to say, 'close it down.' We have to have a little bit of flexibility," Mr Trump said on Wednesday.

New York City is the worst-hit area, with 1,562 deaths in the pandemic, John Hopkins University reports. 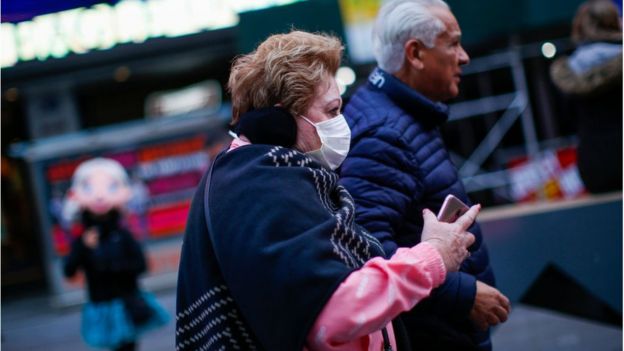 New York City is the epicentre of the US coronavirus outbreak

Both the US Centers for Disease Control (CDC) and the World Health Organization (WHO) are reassessing their guidance on face masks, as experts race to find ways to fight the highly contagious virus.

Covid-19 is carried in airborne droplets from people coughing or sneezing, but there is some dispute over how far people should distance themselves from each other, and whether masks are useful when used by the public.

The WHO advises that ordinary face masks are only effective if combined with careful hand-washing and social-distancing, and so far it does not recommend them generally for healthy people.

However, more and more health experts now say there are benefits. They argue that the public use of masks can primarily help by preventing asymptomatic patients - people who have been infected with Covid-19 but are not aware, and not displaying any symptoms - from unknowingly spreading the virus to others.

Masks may also help lower the risk of individuals catching the virus through the droplets from another person's sneeze or a cough - and people can be taught how put masks on and take them off correctly, they argue.

On Thursday New York mayor Bill de Blasio urged all New Yorkers to cover their faces when outside and near others, but not to use surgical masks, which are in short supply.

"It doesn't need to be a professional surgical mask. In fact, we don't want you to use the kind of masks that our first responders need."

Dr Deborah Birx, one of President Trump's coronavirus advisers, expressed caution about general mask-wearing. "We don't want people to get an artificial sense of protection," she said. "They're an additive."

There is also disagreement among experts over the benefits of using cloth masks. European advisers say reusable cloth masks are not recommended and may even increase the chance of infection.

How serious is the pandemic in the US?

Hospitals and morgues in New York are struggling to cope with the pandemic, and New York Governor Andrew Cuomo has warned that New York risks running out of ventilators for patients in six days.

An emergency field hospital now stands in Central Park, and another makeshift hospital is to be set up in the city's Javits Center, a conference venue.

The White House has ordered car firms to switch rapidly to ventilator production.

Most states in the US have issued "stay-at-home" orders, putting more than 75% of Americans under lockdown.

More than a million cases of coronavirus have been registered globally, according to Johns Hopkins University.