Arsenal boss Unai Emery said his side's slow start to games is an area they need to improve after they came from behind to draw at home to Wolverhampton Wanderers on Sunday.

The visitors had taken the lead in the first half through Ivan Cavaleiro's close-range finish before Henrikh Mkhitaryan scored a late equaliser.

Arsenal, along with Cardiff, are the only two sides in the Premier League yet to be leading at half-time in any of their matches so far this season.

"Maybe [starting slow is] one thing we can improve but that comes naturally in our work," Emery said.

"The team played with character and we had chances to draw before our goal. We also continued to look for ways to create and to win the game but then we drew.

"In the last five or 10 minutes, we had the same idea with the risk but also thinking to win."

In a thrilling contest, Wolves almost snatched it in stoppage time when 18-year-old substitute Morgan Gibbs-White hit the bar.

The fifth-placed Gunners are three points behind fourth-placed Tottenham, while Wolves remain 11th in the table.

Despite Mkhitaryan's equaliser, a cross which somehow found its way past Patricio, this was two points dropped as far as Arsenal were concerned.

Having started the day six points off the top, they go into the international break trailing leaders Manchester City by eight points after another slow start.

When Cavaleiro struck to leave Wolves fans dreaming of a first win on Arsenal soil for 39 years, Arsenal's defence was busy conducting an inquest into why they had conceded the first goal for the fourth successive Premier League match.

Against Leicester they roared back to win comfortably. Against Wolves it was different as the visitors proved stubborn at the back before Mkhitaryan struck.

Having drawn against Liverpool and Crystal Palace in their previous two league games, the Gunners are now without a top-flight win in three matches - proof there is much for Emery to work on despite his team's unbeaten run.

Alex Iwobi, starting a league game for the first time since 28 October, lasted until half-time before he was replaced while Mesut Ozil was also taken off as the under-par Gunners struggled against their vibrant opponents.

Arsenal's first match after the break is away at Bournemouth before back-to-back top-flight matches at home to Tottenham and away to Manchester United.

Emery will hope his side have returned to winning ways before the north London derby on 2 December. 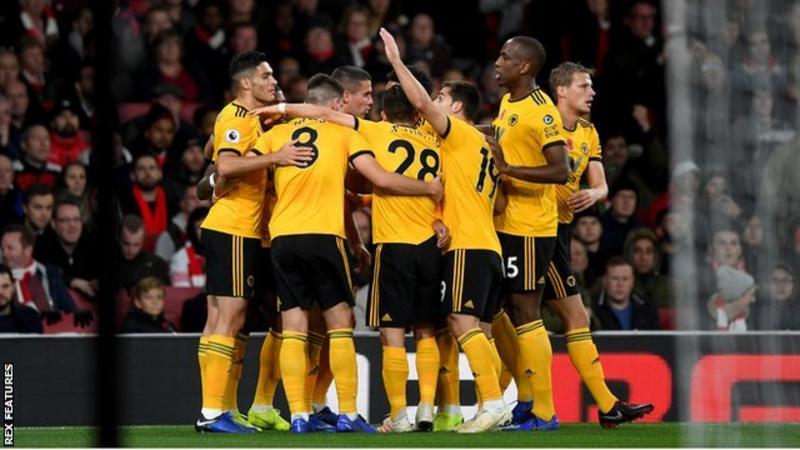 Wolves had lost their past three Premier League games

Wolves have the quality to thrive

Wolves' players were visibly hurting at the final whistle after failing to hang on for a stunning victory.

They are without a win in four top-flight games and they have much to ponder during this month's two-week break from action - most it it positive.

Having held both leaders Manchester City and Manchester United, Wolves once again proved against Arsenal they are a handful for anyone at this level.

They were a frightening force on the counter thanks to Jimenez and Helder Costa. At the back Conor Coady and Ryan Bennett frustrated Aubameyang and Alexandre Lacazette until Arsenal finally came alive in the closing stages.

In Gibbs-White, they have an exciting young talent, while Adama Traore added more energy and pace to the forward line when he came on.

Wolves have been a refreshing addition to the Premier League but they have struggled for goals and it was their inability to add a second, when they were in control of the first half, that cost them a win their play deserved.

After testing games against Tottenham and Arsenal, Nuno Espirito Santo's side face struggling Huddersfield and Cardiff before entertaining Chelsea on 5 December. 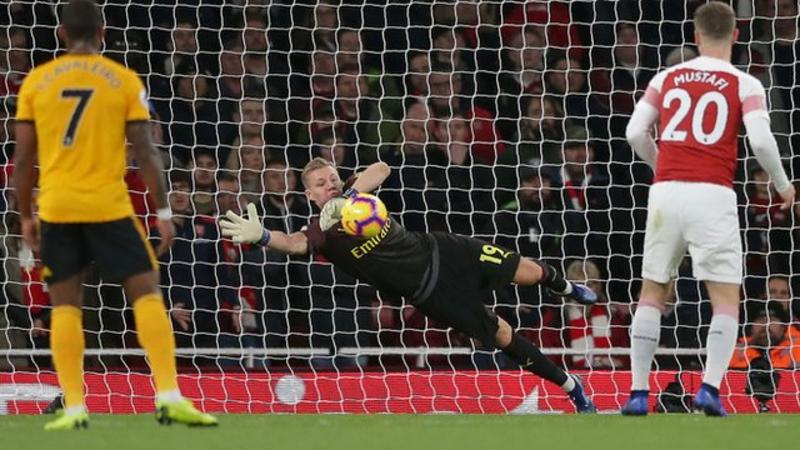 The fact Bernd Leno was man of the match says everything you need to know about this game. The Arsenal keeper produced a string of excellent saves - the best from substitute Diogo Jota

"Against Everton, when they score the first goal, you need to bring things tactically because they are very organised. You need to take a risk.

"For me the match is difficult and we needed to take chances and play tactically. Above all we needed to score. I am happy with every player because they worked and with a good attitude."

Wolves manager Nuno Espirito Santo: "Coming to the Emirates and playing the way we have played, we should be proud.

"We need to speak among ourselves about what was not possible to achieve. There is a clear improvement, better defence, creating many chances and keep on working.

"Even when Arsenal equalised, the best chances were ours and they asked the referee for more time. If we had more time maybe we would have been better."

Learn from your mistakes - the stats

Higuain sent off as Juve win at Milan
Previous Item
NEXT

Unai Emery unsure when striker will return
Next Item