Fulham manager Claudio Ranieri was denied victory over former club Leicester as James Maddison scored for the second successive match to secure a point for the Foxes.

Until Maddison swept in the equaliser from Shinji Okazaki's cross from the right, the hosts had looked on course to climb off the bottom of the Premier League and out of the relegation zone thanks to Aboubakar Kamara's goal.

The French forward, who had not scored in a league match since 2 January, chased on to Aleksandar Mitrovic's flick, exploiting a mistake from Caglar Soyuncu, to drive a shot through Kasper Schmeichel's legs.

But the visitors, who had started brightly and passed up more than enough chances to win, deserved their point.

It left the Cottagers to equal an unwanted club record of 19 top-flight matches in a row without a clean sheet, dating back to 1950, and only Barnsley, in 1997-98, have conceded more goals at this stage of a Premier League season.

The result leaves Fulham bottom of the table, while Leicester remain ninth.

When Ranieri masterminded Leicester's stunning Premier League title-winning campaign two years ago, he did so at odds of 5,000-1.

His latest job - leading Fulham to safety - is certainly a more modest challenge, but it is an altogether different proposition at the wrong end of the table.

Ranieri arrested a sequence of seven consecutive defeats with victory over Southampton, but he is yet to plug the top-flight's leakiest defence.

Fulham have not won consecutive home matches in the Premier League since April 2013 - and with trips to Manchester United, Newcastle and Arsenal in the next month, they may regard this as an opportunity missed.

Despite posing an attacking threat with 25 shots on goal, only seven of those were on target, and they looked decidedly shaky at the back.

Goalkeeper Sergio Rico made several excellent stops, particularly to deny Kelechi Iheanacho in the opening two minutes, while Wes Morgan and Maddison both failed to hit the target from close range when unmarked.

Leicester's team contained five players involved in Ranieri's last fixture in charge - a 2-1 Champions League defeat in Seville in February 2017 - but there is a different feel to them under Claude Puel.

Without the pace of Jamie Vardy, missing with a groin injury, the lightning counter-attacking style employed by Ranieri gave way to a more possession-orientated approach.

And during a first period in which they controlled the flow and tempo of the game, the Foxes could have put the result beyond doubt.

Maddison was at the heart of their best work - providing tempo to their passing - and it was his threaded pass that set Iheanacho away early on.

Once Okazaki and Demarai Gray had been introduced, the 22-year-old had the freedom to press further forward and his surge into the penalty area delivered the reward of an equalising goal, his fifth of an impressive debut season in the Premier League.

Had he not snatched at a late chance from eight yards - the only one of his three efforts not to hit the target - the Foxes may have won the first of three consecutive matches against London clubs. 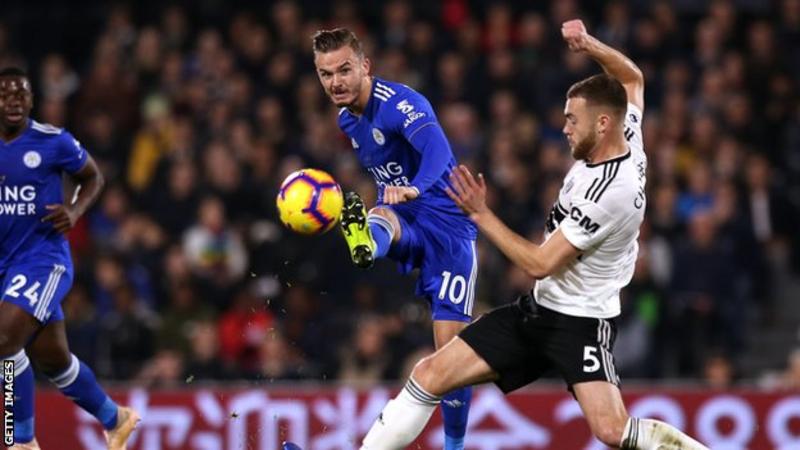 Maddison has been involved in more league goals (seven - five goals, two assists) than any other Leicester player this season

'Sooner or later we will win' - what they said

Fulham manager Claudio Ranieri speaking to BBC Match of the Day: "I think a draw was right. It was just that they had two great chances at the beginning and they had another two after they scored.

"In our best moment we conceded a goal and we then had the last chance to win the game. A draw is OK. We have to fight and sooner or later we will win. Everybody is working hard to do their best and in the second half we had the match in our hands. But that's football."

On his reception from fans: "The experience was fantastic from the beginning when the fans together shouted my name. But after I was so concentrated."

Leicester manager Claude Puel speaking to BBC Match of the Day: "I think it was a normal draw. Any team could have won or lost this game. We had good chances, particularly in the first half.

"We played a good team, who did well against Chelsea and Southampton. We were up and down in the game and we needed to manage it more.

"I would like to congratulate my players for coming back, which is a good thing for our mentality. We believed in ourselves and that's a good sign for the future."

On Kelechi Iheanacho: "After his first chance he lacked a little confidence to move and create other situations. I'm happy about our mentality to fight and try to win but today we had a lot of difficulties."

On Jamie Vardy being back for the weekend: "I don't know, we will see. We will adapt in the few days before the game."

Fulham travel to Manchester United in their next Premier League game on Saturday (15:00 GMT) while Leicester host Tottenham on the same day (19:45 GMT).

Everton point against Newcastle
Next Item