The January transfer window is open for business and some of Europe's biggest clubs are looking to strengthen their teams.

The 5 live Football Daily Podcast panel discuss what has happened and what might happen in the next three weeks.

Real Madrid: Why are the European champions signing 19-year-olds?

It is the stuff of dreams - joining European champions Real Madrid at the age of 19.

For Manchester City's Diaz, it's become a reality after the Spanish side paid £15m for the midfielder who has made just five substitute appearances in the Premier League.

So why are Real - fifth in the La Liga table and 10 points behind leaders Barcelona - turning to teenagers?

"He is there because Real Madrid are in disarray," said Spanish football expert Guillem Balague.

"Real changed their transfer policy in 2013 when first of all they started getting young Spanish players that won the European Under-21 Championship.

"They have spent 270m euros on 16 under-23s since then. Real still need the Galacticos and they will sign Galacticos this summer.

"I don't think Diaz knows how good he is. He can play both wings and he's talented, got pace, good in one-against-one situations."

Diaz has already played one game for his new club. He made his debut in Real Madrid's 3-0 Copa del Rey last-16 first-leg victory over Leganes on Wednesday.

"For Diaz it's an opportunity you cannot say no to," added French football journalist Julien Laurens. "You just cannot turn down Real Madrid when you are 19."

How would Ramsey fit in at Juventus?

Juventus are leading the race to sign Arsenal midfielder Aaron Ramsey when his contract expires at the end of the season.

The 28-year-old's current preference is to join the Italian champions but, contrary to some reports, he has yet to make a final decision and will continue to consider offers from a number of Europe's leading clubs.

If Ramsey does end up in Italy, how will the Wales international adapt to life alongside Cristiano Ronaldo?

"Even though they extended Sami Khedira's contract in September, there is a feeling Ramsey would be successor to Khedira who has had injury problems this year and wasn't always that reliable in terms of fitness," said Italian football specialist James Horncastle.

Once Ramsey has made his choice about his next club, he is expected to sign a pre-contract agreement and undergo a medical this month.

He will complete the campaign with Arsenal prior to leaving as a free agent in the summer.

With no transfer fee to pay, the likelihood is Ramsey's next club will make him the best-paid British player of all time.

Why is Fabregas going to struggling Monaco?

Monaco are second bottom in Ligue 1 - five points from safety - after 11 defeats in 18 games.

Yet last season's runners-up are on the verge of signing Cesc Fabregas from Chelsea.

Fabregas played alongside Monaco boss Thierry Henry at Arsenal and Henry hopes his 31-year-old former team-mate can use his experience to help save the team from relegation.

"Thierry wanted someone very experienced like Fabregas who could control the midfield - a bit like Joao Moutinho was doing before," added Laurens.

"They let Moutinho go to Wolverhampton Wanderers and I don't think they thought Joao leaving would be such a huge blow.

"Monaco don't have someone like Moutinho who can control the game, the pace of the game, put his feet on the ball and accelerate the play when needed.

"They really believe Cesc is the man to do that. I'm not sure Cesc would want to be in a team that went down to the French Second Division but he would be there to help them try and save their season."

Have Barcelona signed the new Kante?

Barcelona have agreed a deal with Jean-Clair Todibo to sign the defender on a free transfer when his contract with Toulouse runs out on 30 June.

It's a remarkable story - the 19-year-old only made his first-team debut for the French club in August.

Todibo can also play as a defensive midfielder and his rapid rise has been likened to that of N'Golo Kante, who went from playing for Caen in France to Premier League winner with Leicester City.

"Two-and-half-years ago Todibo was playing for a small club in the north of Paris in the third-tier of the under-17 league in France," said Laurens.

"What's fascinating is that he has come from nowhere and now he's going to be Lionel Messi's team-mate. Is there a Premier League replacement for Rabiot?

Paris St-Germain need to strengthen their midfield, especially as Adrien Rabiot's future is in doubt after his refusal to sign a new contract.

Brazilian defender Marquinhos was asked to fill in as a makeshift defensive midfielder in Wednesday's surprise Coupe de la Ligue quarter-final exit at the hands of Guingamp.

Could the French champions turn to the Premier League to strengthen?

Everton's Idrissa Gueye and Watford's Abdoulaye Doucoure might interest PSG, according to Laurens.

"They need one defensive midfielder for sure - two ideally," he explained.

"They only have 25-30m euros and you can't sign a world-class midfielder for that kind of money.

"Do they sign someone like Gueye or Doucoure who are not really the calibre they want but they need a body there?

"Or do they wait for the summer and sign a much better player and a much bigger name in that position?

And what next for Balotelli?

Will Mario Balotelli be on the move this month?

The chances are the 28-year-old former Liverpool and Manchester City forward will be leaving Nice after more than two years at the club.

Balotelli has not scored this season and his last appearance was on 4 December.

"The club is working with his lawyers and his agent Mino Raiola to finish his contract and then he can go wherever he wants," said Laurens.

"Nice could get a little fee for him but they don't want to hear from him anymore. Marseille were interested in the summer but they are now in complete disarray.

"Will Balotelli go there? I'm not so sure." 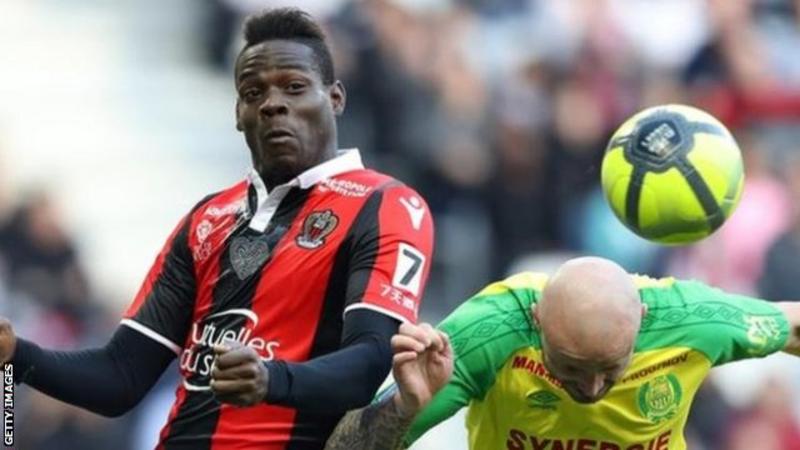 Jones 'cried at texts' after Luton exit
Previous Item
NEXT