A five-wicket haul from Abu Jayed helped Bangladesh to a comfortable six-wicket win in the Tri-Nations ODI against Ireland at Clontarf.

The hosts made 292-8 with Paul Stirling (130) and captain William Porterfield (94) setting an Irish record stand of 174 for the third wicket.

Jayed helped restrict the runs and Bangladesh cruised to 294-4 in 43 overs with Liton Das top-scoring on 76.

Bangladesh will take on West Indies in Friday's final.

Ireland were already out of contention for a place in the decider after twice losing to the Windies while their first game against Bangladesh was washed out.

However, they hoped to finish the series on a high and it looked good with big-hitting opener Stirling smashing four sixes while there was a much-needed return to form for captain Porterfield. 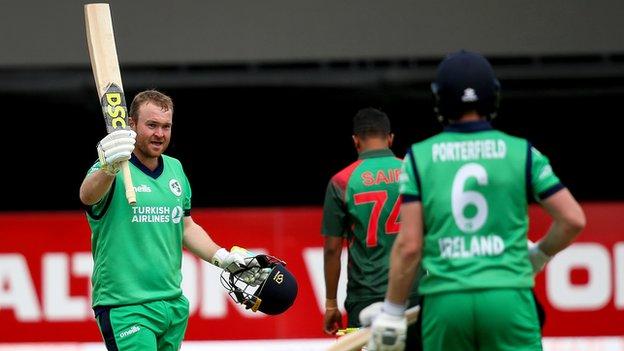 Jayed accounted for both and also the in-form Andrew Balbirnie (23) as the Irish slumped from 233-2 to 292-8 in the last six overs.

It was still a competitive total but Bangladesh, who had won all three of their completed games in the series, cruised to the target.

Their cause was helped by a disappointing Irish attack which has toiled throughout the series and was again easily plundered.

Tamim Iqbal (57) and Das put on 117 for the opening wicket while Shakib Al Hasan added 50 before retiring hurt.

Wicket-keeper Mushfiqur Rahim made a brisk 35 and Mahmudullah was unbeaten on the same score.

Irish paceman Boyd Rankin chalked up his 200th international wicket as he took 2-48 but it was another chastening day for his fellow bowlers.