This year has marked a new chapter in the story of Sophie Hahn.

With a new coach at the helm, Hahn has a renewed confidence and - with a world record already under her belt this season - the stats to back it up.

Dubai soon beckons for the World Championships, as does Tokyo for the Paralympics, but first come the Anniversary Games at the place where it all started.

Seven years will have soon passed since the London 2012 Paralympic Games thrust disability sport into the spotlight like never before.

Back then, Hahn was just 15, but like so many, was inspired to join an athletics club. A year later, she was crowned T38 100m world champion for the first time - a title she has since retained not once, but twice.

"I just love competing in that stadium and I know the track is great for me," Rio Paralympic champion Hahn, now 22, tells BBC Sport.

In 2017, she broke the 100m and 200m world records at the World Para-athletics Championships on that very track made famous by London 2012. On Sunday, she will be back at the London Stadium, competing in the T38 100m.

"It brings back so many memories," Hahn adds. "It gives you goosebumps walking into that stadium, because it brings flashbacks from the Worlds. There's something about it."

'I'm really happy with where I am' - reaping the rewards

Hahn changed her training set-up at the start of 2019 and is now coached by Leon Baptiste, a two-time Commonwealth Games champion from Delhi 2010.

A multiple world and European medallist, in addition to her Paralympic and Commonwealth Games titles, Hahn has won everything available to her yet she is not afraid of making changes in order to continue improving.

Her switch in coach paid off when she broke her own 100m world record at the Loughborough International in May, shaving 0.01secs off her previous best time, and for Hahn, the timing could not have been better.

"I've loved every minute of working with Leon," she says. "He's a fantastic coach and I'm in a group of fantastic, talented athletes and I'm really enjoying it.

"The next few years for me are massive. I've got the Worlds later this year and the Paralympics in Tokyo next year, so it's going to be a big chapter for me and I felt I needed that extra guidance.

"I'm really happy with where I'm at at the moment."

Although the Tokyo Paralympics are little more than a year away, Hahn's current priority is retaining her world titles in both the T38 100m and 200m in Dubai in November.

The World Championships will come far later in the season than previous editions, with other British athletes previously saying it could "hinder" their preparations for Tokyo.

"I think Dubai is going to be a challenge for not just me but the whole team," says Hahn.

"I've always loved competing in warmer conditions because of my cerebral palsy. The warmer it is, the more my muscles can relax.

"I would love to retain my titles. I'm not too worried about the time, but obviously if the time is another world record then that would be a bonus."

'I'm happy I didn't trip over my skirt' - photoshoot fun 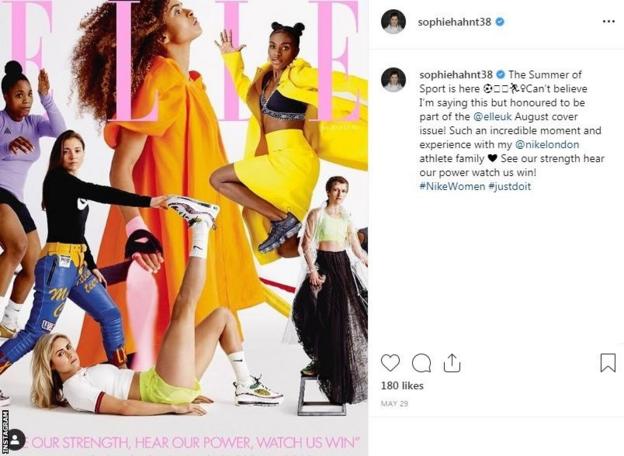 Going into a huge summer of women's sport, Hahn was one of a number of British athletes to feature in an Elle magazine shoot in May celebrating "the women changing the face of sport".

"It was absolutely incredible," she says. "It was a privilege to represent para-athletes.

"It was just fantastic to see women from elite sports show what we can do.

"I was so happy I didn't trip over my skirt."

Why time is running out for Setien

Ellington to make 100m comeback in London
Next Item