The Open 2019: Tiger Woods heads to Portrush after light schedule in bid to prolong career

Tiger Woods is "not as sharp" as he would like to be for this week's Open Championship but says a light schedule is vital to prolonging his career.

The 43-year-old has played just three tournaments - two of them majors - since winning the Masters in April.

Woods, who ended an 11-year major drought at Augusta, is playing less golf to ease the strain on his back.

"You have to understand, if I play a lot, I won't be out here that long," said the 15-time major champion.

"The tricky part is trying to determine how much tournament play I need to get the feel for the shots and also understanding where my body is."

Woods underwent spinal fusion surgery in 2017 to try and rectify long-standing back problems.

Victory at Augusta saw Woods win a fifth Green Jacket, 22 years after his first, but the American, who has climbed back up to fifth in the world rankings, added: "Getting myself into position to win the Masters took a lot out of me. That golf course puts so much stress on the system.

"It was a very emotional week. It's hard to believe I pulled it off."

Changes to the major schedule also now mean a more condensed programme for the world's top golfers, with the US PGA Championship this year moving from August to May, making this Open Championship, which is being played at Royal Portrush in Northern Ireland, the last major of 2019.

"Last year, I played too much. I played 17 events and a lot of it was trying to qualify for certain events," added Woods.

"This year I made a conscious effort to cut back on my schedule to make sure that I don't play too much."

However, the three-time Open winner feels the nature of links golf means there will be more opportunities for older players to challenge this week.

"It allows the players that don't hit the ball very far or carry the ball as far to run the golf ball out there," said Woods. "There is an art to playing links golf.

"The more I've played over here and played under different conditions, being able to shape the golf ball both ways and really control trajectory, it allows you to control the ball on the ground."

This is the first time Woods has played the Dunluce course at Royal Portrush and he expressed his surprise that The Open had not been staged at the venue for 68 years - when the club hosted the only other Championship to be held outside of England and Scotland in 1951.

"It's amazing it's been this long," he added.

"It's such a great venue. Everyone who's played it, whether it's guys who grew up here or people who have come up here and just played, they've always enjoyed it.

"I can understand why. It's straightforward. It is tricky a little bit here and there, but overall it's just a wonderful links golf course."

Woods calls on Koepka for help - gets no reply

Woods said he had to do plenty of homework before hitting the course, and admits there is still work to do before play gets under way on Thursday - he tees off at 15:10 BST.

"It's not quite as sharp as I'd like to have it right now," he said. "But my touch around the greens is right where I need to have it.

"I still need to get the shape of the golf ball a little bit better, especially with the weather coming in and the winds are going to be changing."

He did look to countryman Brooks Koepka for a favour and some insider knowledge - with the world number one's caddie Ricky Elliott growing up within a mile of Portrush.

"I texted Brooksie, 'congratulations on another great finish'," said Woods about Koepka's second place at the US Open.

"I said: 'Hey, dude, do you mind if I tag along and play a practice round? I've heard nothing!'."

Koepka's caddie to become a legend? 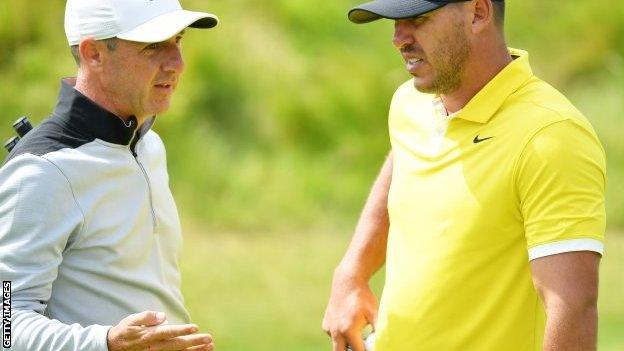 "I don't think when he grew up that Ricky ever thought there would be an Open Championship here," said four-time major champion Koepka who has a best finish of tied sixth at the 2017 Open.

"And to top it off, I don't think he ever thought he'd be a part of it. To be caddying and to be able to win one here, he'd be a legend, wouldn't he? He already is. But it would be cool to see him win.

"It's been fun. I probably hear more, 'Ricky, hey, Ricky, what's going on?' than anything. I'm sure he'll have quite a lot of friends and family out. It will be a special week for him."

The 29-year-old boasts incredible form in the majors this year, finishing second to Woods at the Masters, before winning the US PGA Championship and then coming runner-up at the US Open.

He says finishing second "sucks" but credits Elliott for keeping him in contention.

"He's been great. He keeps it light. He knows not to talk about golf while we're out there," said the 29-year-old.

"He knows if I'm getting a little bit tense, maybe upset, angry, whatever it is, he can tell just by my walk. He can tell, just body language and I think that's what makes a great caddie.

"A lot of times he'll tell me to slow down, slow my walk. If I get angry, my walk just gets a little bit quicker.

"And then under pressure he knows exactly what to say at the right time, and that's what you want in a caddie. I wouldn't want anybody else on my bag, I know that.

"He's been tremendous. He's part of the reason why I've had the success I've had. And I love the guy to death. And I'm looking forward to many years to come."

Justin Rose will be hoping to go one better than his best Open finish last year, when he tied for second at Carnoustie, and win a second major after his success at US Open in 2013.

"If you won both Opens, that's a lovely pair, no doubt," he said. "That would be halfway towards a Grand Slam. If I was able to do that then I would immediately shift to 'I'm 50% of the way there'.

"The next one is really important for me, because it makes the next two feel possible."

The Englishman, 38, also questioned the major schedule and believes it has been condensed to fit with the FedEx Cup play-offs in August.

"For me a major championship should be the things that are protected the most," he said. "That's how all of our careers ultimately are going to be measured - 30, 40 years ago there wasn't a FedEx Cup.

"It's the majors that are the benchmarks. For them to be tweaked so much I think is quite interesting at this point."

7 Moroccan will host the 12th African Games
Next Item