Britain's Thomas had set the fastest mark, only to see last man Alaphilippe finish 14 seconds quicker over the technical 27.2km course in Pau.

Alaphilippe now leads Thomas by one minute 26 seconds heading into an important weekend in the Pyrenees.

"I didn't really expect that from Alaphilippe," Thomas told ITV4.

It was a remarkable effort by Alaphilippe to extend his lead on the 100th anniversary of the introduction of the yellow jersey, with the Deceuninck Quick-Step rider having been expected to lose time to Thomas here.

Alaphilippe, 27, may yet fade on the longer climbs to come when Team Ineos set a high tempo in service of Thomas and Saturday's summit finish at the famed Tourmalet on stage 14 will be a huge test of his overall credentials.

But this was a clear statement that Alaphilippe, who also won stage three, intends to fight all the way to stay in yellow.

"It's incredible. I'm really happy. I knew I could do a good performance on such a course but I didn't think I could win the stage," he said.

"I pushed my limits and, with the help of the public, I gave everything until the line. 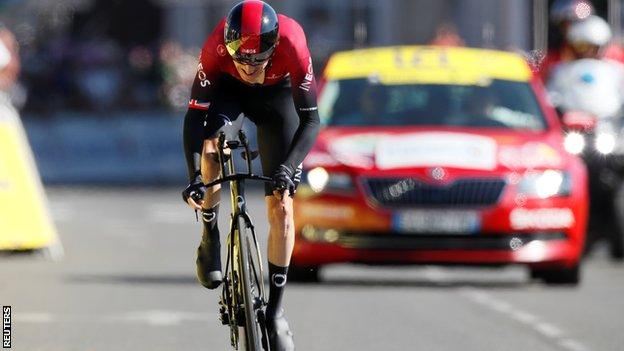 This was still a strong ride by Thomas as he put more time into his other general classification rivals.

The Welshman, who set off second last, beat long-time leader Thomas de Gendt by 22 seconds, with the Belgian finishing third.

"It was OK, just that last bit I didn't feel like I really did it - when I really wanted to step on it, I didn't have that last 5% but it's still a decent ride," said Thomas.

A tricky course that included two lengthy climbs, a fast descent and a ramp at 17% gradient near the finish improved the overall contenders' chances of stage victory, particularly with world time trial champion Rohan Dennis having mysteriously abandoned the race on Thursday.

Richie Porte and Thibaut Pinot put in fine rides to limit their losses, while Steven Kruijswijk and Enric Mas moved up to third and fourth respectively after Thomas' team-mate Egan Bernal had a relatively disappointing day, finishing 22nd.

Britain's Adam Yates also struggled and dropped from seventh to 10th, while Rigoberto Uran, who finished second in 2017, impressed in finishing fourth on the stage to move up to eighth overall.

Belgium national time trial champion Wout van Aert, who won stage 10, was forced to abandon the race after a heavy crash inside the final 2km.

The 24-year-old clipped a barrier on a tight right-hand bend and was taken to hospital after sustaining a deep cut on his leg.

Watch London Anniversary Games on the BBC
Previous Item
NEXT