Moise Kean: How did Everton land deal for superstar youngster?

Everton's signing of Italy's brilliant teenage striker Moise Kean from Juventus was one of the surprise deals of the transfer window.

Kean, 19, emerged as one of Europe's top young attacking talents in Serie A last season, showing enough promise to be given his full international debut by manager Roberto Mancini in November 2018.

Juventus' decision to sell Kean prompted surprise and anger among many of the club's supporters - while Everton's ability to close out the move was regarded as a major coup for the Merseysiders and director of football Marcel Brands.

This is how the Toffees secured the signature of one of Europe's brightest young talents, and why former PSV director of football Brands is central to an effective recruitment process.

How the deal was done

Kean had been on the radar of the well-connected Brands, along with many others, for 18 months and Everton formulated plans for a loan deal in January, a window the Dutchman rarely likes to get involved in unless the circumstances and the players are special. Kean was one of those exceptions.

Juventus, with Serie A and Champions League commitments, were not receptive to any such deal, while in the remaining months of the season Kean's profile rose dramatically on the strength of his performances and, sadly, when he was subjected to racist abuse during Juventus' game in Cagliari in April.

This led to concerns behind the scenes at Goodison that a move for Kean, which was at the forefront of Brands' plans, would now be more difficult. In March, he made his first start for the national side, scoring in a Euro 2020 qualifier against Finland, which Italy won 2-0. The goal meant he became his country's youngest goalscorer, at just 19 years and 23 days, since Bruno Nicole in 1958.

Everton, however, remained convinced a deal could be done and all the pieces fell perfectly into place.

Brands and Everton chairman Bill Kenwright have a good working relationship with super-agent Mino Raiola, who represents Kean, while a changing of the guard at Juventus opened the door for a move.

Maurizio Sarri replaced Massimiliano Allegri, who was a mentor to the youngster, with Sarri's personal favourite Gonzalo Higuain returning to Juve after loan spells at AC Milan and Chelsea. Kean was being pushed down the pecking order.

Higuain joined an attacking force led by Cristiano Ronaldo and complemented by Paulo Dybala, Mario Mandzukic, Douglas Costa and others.

Italian journalist Stefano Boldrini, London correspondent for Italian daily Gazetta dello Sport, told BBC Sport: "The story of Kean surprised a lot of people in Italy because at the end of last season he was very good. He scored for Juventus and he scored for Italy.

"But with Sarri and the Allegri departure, a lot of things changed in Juventus. The younger Kean had to move. 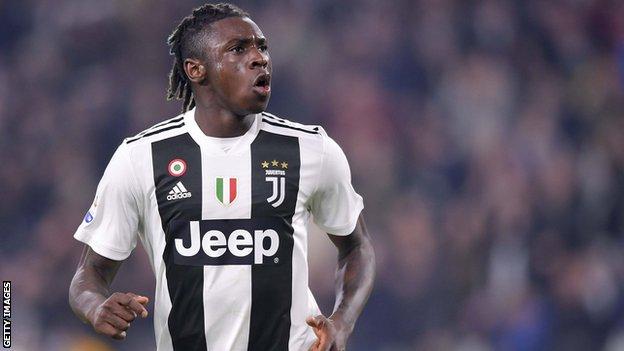 "We spoke to Roberto Mancini and he said it is a pity younger Italian players do not find places and have to move. He said he is sure Everton will be a good experience because Everton is a well-organised, ambitious club who wants to get back into the big European competitions so it may be a good experience."

Everton also took advantage of what could be called Juve's 'in the moment' mentality which means they demand instant results rather than count on too many works in progress, such as Kean.

Juve also needed to recoup money after heavy outlay on fees and salaries on the likes of Ronaldo and, this summer, Matthijs de Ligt from Ajax and Aaron Ramsey from Arsenal.

Raiola, who also negotiated the De Ligt deal, knows he can work with Brands and Kenwright and regarded Everton as the ideal club for Kean to get regular football, not guaranteed at Juventus and perhaps not by other clubs who may have taken an interest such as Inter Milan, Arsenal and Manchester United.

This all enabled Everton to strike a deal which resembles a real bargain at £27m with add-ons that will leave any potential final fee just short of £30m.

The final flourish was added when Everton were able to seal the deal without the buy-back clause Juve would have preferred.

Everton director of football Brands brings the personal touch to his transfer dealings, believing it can make the difference when closing out the sort of deals that are his trademark - namely young, emerging talent that can serve a club well and retain serious sell-on value.

In other words, Moise Kean.

It was a key factor in convincing Kean that Goodison Park was the place for him.

The approach was perfectly illustrated on the day Kean signed for Everton in the presence of his mother, who was handed a personalised Everton shirt by Brands as he told her: "We will take care of your son."

"He talks to the wives of the players, to the family. He knows everything - and I mean everything. If Kean has a nephew he will know about him.

"Marcel knows the hard world of money but gives it a personal touch. It is his way of persuading and convincing players to come. He plays the family card. He will know everything about the mother, the father, the family, their circumstances."

Kean has revealed how impressed he was on first meeting with Brands - and it is his attention to detail that proved key in persuading the young Italian and others that Everton is a club on a new footing and the perfect platform for the next stage of a career.

Of course finance plays a big part, but the Kean deal and others were based on a personal presentation given to each prospective signing on how Everton see them working within the squad, analysis of the player, performance statistics, strengths and capabilities, different systems and styles they may be expected to play.

When Everton agreed a deal with Manchester City for Fabian Delph, Brands went to the England midfield man's house to deliver his pitch and presentation.

Kean felt this additional detail demonstrated how much Everton wanted him, how much homework had been done and how they mapped out his future. Brands made it clear to Kean he was a desired investment and not simply a commodity.

Brands used this approach while sporting director at PSV, persuading the in-demand Mexican attacker Hirving Lozano to leave Pachuca for the Dutch club in the summer of 2017. It was a deal six months in the making, including two visits to the player and his family.

Lozano, who helped win the league title in his first season when Brands was still at the club, is now moving to Napoli in a 42m euros deal.

The Brands touch worked on Lozano and it worked on Kean.

Everton also have a three-tier care system for players once they have signed to ensure they have no off-field distractions, so Kean will even have details such as a National Insurance number, mobile phone, car and housing options all dealt with by designated members of staff.

Brands, who has formed a shrewd negotiating partnership with chairman Kenwright, put the full force of his package in front of Kean and completed what may prove to be a transfer of real significance for Everton.

The 57-year-old Dutchman arrived from PSV in May 2018, replacing Steve Walsh as director of football after his disastrous spell. Such has been his impact that he was appointed to Everton's board seven months after his arrival and placed in charge of overall football strategy at the club. 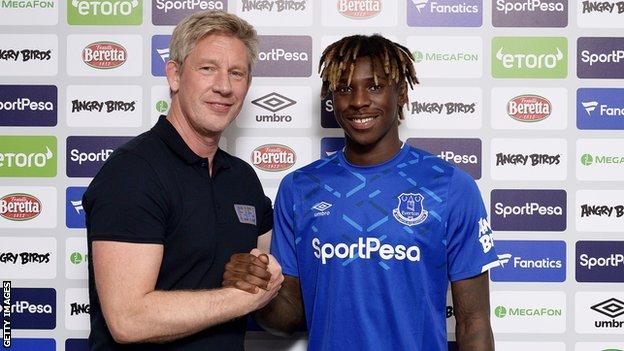 Marcel Brands told Moise Kean's mother: "We will look after your son"

Kean's acquisition has his imprint all over it - a young player ripe for development placed in the hands of the manager, in this case Marco Silva, to apply the polish.

It is a strategy that has served him well, such as when he acquired the young Georginio Wijnaldum from Feyenoord at PSV in 2011 and when he brought the tyro Mousa Dembele from Willem II to AZ Alkmaar in 2006, the former Spurs midfield man playing a key role in their unlikely Eredivisie title triumph three years later.

"He has an unbelievable knowledge of world football and this Kean deal shows everything about Marcel Brands to me," Schreuder added.

"He is adaptable and creative - remember he did so many smart deals with not so much money at AZ and PSV. He is never lazy and he is so well-connected.

"Marcel is a correct guy with good manners. He talks to families but he can also take coffee with agents such as Raiola and the owners of the big clubs in the world.

"He has signed Kean and it will not be his last like this. He can do other types of deals too.

"Let's say there is a player who is not in a good way at a big club, then Marcel Brands will try to persuade him that there can be new life in football, new fun, that his wife will be happy and then maybe in two years you might move on but first give us two years at Everton. "

Brands has given Everton's transfer strategy the new dimension of a man at the helm whose name means something when he calls the big clubs and agents, an area where Walsh struggled.

How big is Everton's coup?

Kean has already generated real excitement at Everton, particularly with his explosive cameo as a substitute in the 1-0 win against Watford.

Former Everton winger and BBC Sport pundit Pat Nevin saw a lot of Kean last season - and believes his former club have engineered what could be the best piece of business this summer.

He told BBC Sport: "I can see this being the deal of the season. When I look at the players who have been bought, say like Joelinton at £40m to Newcastle, Kean is miles ahead and the price is cheaper.

"Kean is also much younger. I was staggered by the relatively low price Everton have paid and also thought an Arsenal or a Chelsea might try to get him as well."

He added: "I'm not shocked Everton got him. I just thought they would have to spend a lot more. Three, four or five years down the line he could become an Everton great. He has such potential.

"He has work-rate, match intelligence. I love him as a player and told quite a lot of people about him.

"I don't really go on about that many players. I remember telling people to go and get Virgil van Dijk when he was at Celtic, Kieran Tierney from Celtic. There are very few you think are a no-brainer but, if you have watched Kean often enough, he is. I think this could be a fantastic deal at an incredible price."

I quit Halifax to concentrate on Black Queens