Johnny Sexton has questioned the "negativity" around Ireland's World Cup campaign, insisting the Irish are ready for Saturday's World Cup quarter-final against the All Blacks.

Ireland's Pool A defeat by Japan has landed them a last-eight tussle with the holders, but Sexton remains upbeat.

"There's been some negativity around us and we'd feel that's been pretty strange," said the fly-half.

"We're pretty confident and pretty positive in how we've been building."

And Sexton, who at 34 remains Ireland's most vital player, added: "Apart from that 60 minutes against Japan everything else has pretty much gone to plan."

Saturday's dominant 47-5 bonus-point win over Samoa clinched Ireland's quarter-finals place but the hosts secured top spot in Pool A by holding off Scotland in a thrilling contest in Yokohama on Sunday to set up their last-eight meeting with South Africa.

Sexton admits that the Irish will have to produce a near flawless display to have any chance of defeating the defending champions.

"We need to be pretty close to as good as we can be in all aspects to get the result," said Sexton.

"We know they're the best team in the world and we have got to play our best to get there."

The two nations have not met at a World Cup since 1995, when the All Blacks won 43-19 in Johannesburg.

The game in Tokyo will see Ireland aiming to advance beyond the quarter-finals for the first time.

In the previous two editions of the tournament, Ireland impressed in the early stages of the competition before being comprehensively outplayed in the last eight.

Sexton, who missed Ireland's World Cup loss to Argentina four years ago through injury, is hoping that the Japan defeat "got that sort of quarter-final performance out of our system".

"The difference is we are not favourites going into this quarter-final like we were in the last two." 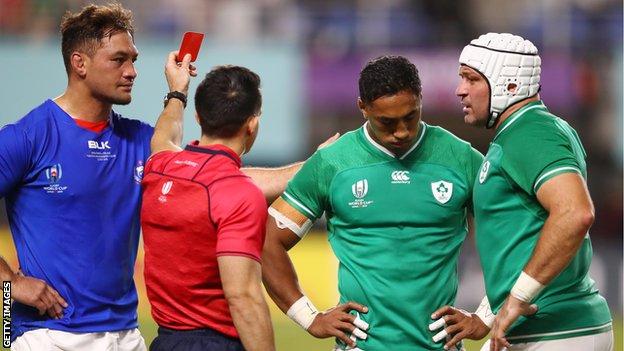 New Zealand topped Group B after coming out on top of their pivotal opening game against South Africa in Yokohama.

The victory was followed by big wins over Canada and Namibia before their final game against Italy was cancelled because of Typhoon Hagibis.

"New Zealand are used to dealing with pressure," Sexton continued.

"I watched the documentary they did on Amazon - they are beating teams by 40 points and they're still getting slated at home.

"That pressure is with them every time they put on the jersey."

Ireland left Fukuoka on Japan's west coast for Tokyo on Monday, where they will find out whether centre Bundee Aki is available for the quarter-final following his red card against Samoa.

Yeboah was one of the greatest strikers-Klopp

Dogboe, Commey will be champions again

'I wanted to help' - Du Plessis on NHS return