England's Euro 2020 qualifying victory over Bulgaria in Sofia was overshadowed by shameful scenes of racism that saw the game stopped twice and officials threaten to abandon the match.

Gareth Southgate's side strolled to a 6-0 victory in an atmosphere that was toxic in the first half and eerie in the second, with a large section of the Vasil Levski Stadium already closed after racist incidents here in June.

England debutant Tyrone Mings was an early victim, turning towards the home fans when chants were aimed in his direction and referee Ivan Bebek stopped the game in the 28th minute after Raheem Sterling was a target for further abuse.

After lengthy discussions, and in accordance with Uefa's protocol for dealing with racism, the crowd were warned of the consequences if there were further problems - and there was a further stoppage just before half-time.

On the pitch, England moved closer to Euro 2020 qualification as they romped to victory with the recalled Marcus Rashford opening the scoring early on with a superb rising drive.

Ross Barkley added a tap-in and a head from Kieran Trippier's cross before Sterling got on the scoresheet with another simple finish just before half-time.

And Sterling provided an even more emphatic answer to those who directed the shameful chants at England's players when he strode through for the fifth goal after 68 minutes.

The issue of racism provided a disturbing backdrop to this game and it was only a matter of minutes before England's worst fears were realised.

Mings was clearly perturbed by chanting, a sorry state of affairs for the 26-year-old who should have been savouring the greatest moment of his career by winning his first England cap.

When England manager Gareth Southgate, captain Harry Kane and several players gathered near the touchline before half-time after more audible abuse, it looked as if the game may be abandoned but it swiftly resumed.

A large group of black-clad supporters, some of whom were making right-wing salutes, were moved from an area behind the dugout and Bulgaria captain Ivelin Popov went into that part of the stadium while the teams walked off at half-time to plead with supporters.

The atmosphere, not to mention the one-sided scoreline, was almost surreal in the second half with the Bulgarian players seemingly demoralised and dispirited themselves by the shocking events of the night. 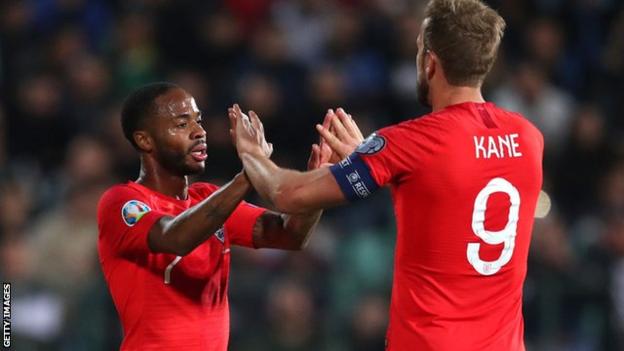 England needed to produce a significant response after the disappointment of their first loss in 44 qualifying matches in the Czech Republic on Friday - and they delivered in every way in these most trying of circumstances.

Mings kept his head under the most disgraceful provocation, while Sterling did what he does well - answered with his actions with another stellar performance.

This was a shockingly poor Bulgaria side but the environment here in the Levski Stadium meant this was an examination of England's character, their ability to stay cool while recording the impressive result they required to boost their chances of being seeded for Euro 2020.

In this context, it was a remarkably impressive effort from Southgate's players.

Kosovo's win against Montenegro means England must wait to confirm qualification, although that will surely come in the next round of qualifiers at home to Montenegro and in Kosovo in November.

What next for Bulgaria?

One can only imagine the severest sanctions await the Bulgarian FA (BFU) after another serious incident of racism scarred a Euro 2020 game here.

There was a grim inevitability about how events unfolded in Sofia given the build-up, with England manager Southgate having reminded his players of Uefa's protocol on racism after they were abused in Montenegro in March.

The Bulgarian authorities responded angrily, with BFU president Borislav Mihaylov sending a letter of complaint to Uefa and coach Krasimir Balakov insisting England's problems with racism were worse than theirs.

It is now up to Uefa to act once it receives the report of the referee and observers.

Player of the match - Tyrone Mings 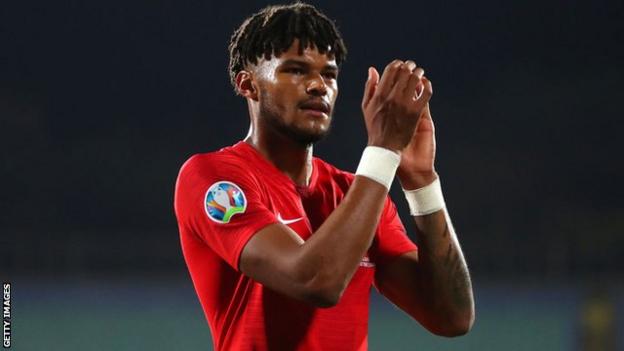 'Our players walked off smiling'

England manager Gareth Southgate to BBC Radio 5 Live: "We had to prepare for this eventuality. The most important thing was the players and staff knew what we were going to do and were in agreement. Nobody should have to experience what our players did. We followed the protocol. We gave two messages - one that our football did the talking and two, we stopped the game twice.

"That might not be enough for some people but we are in that impossible situation that we can't give everyone what they want. But we gave the players what they wanted and the staff what that they wanted. Remarkably, after what we have been through, our players walked off smiling and that's the most important thing for me. Not one player wanted to stop, they were absolutely firm on that."

England defender Tyrone Mings to BBC Radio 5 Live: "It was a great night for me personally. It was a really proud moment in my career. I hope everyone enjoys this moment and it isn't overshadowed. I am proud of how we dealt with it and took the appropriate steps. I could hear it as clear as day. It doesn't affect me too much. I feel more sorry for those people who feel they have to have those opinions.

"I am very proud of everyone for the decisions we made. It's important not to generalise the whole country. It was a minority, not a representation of the country."

Goals flowing for England - the best of the stats

A bleak night handled with dignity by England
Next Item