England stand tall on shameful night of racism in Bulgaria

England made a powerful statement in Sofia as they delivered the most eloquent response in disgraceful, dispiriting circumstances of racism.

Gareth Southgate's side, in the sporting context, needed to answer their first loss in 44 qualifiers against the Czech Republic on Friday - but what they actually achieved went beyond this single game, will be of wider significance, and publicly tackled the scourge that still blights so many areas of society and the game itself.

It was no surprise that England's players were subjected to monkey chants and abuse given the toxic build-up to this fixture and the shadow of racism already hanging over the sweeping, dilapidated and typically Eastern European bowl that is the Levski Stadium.

The swathes of empty seats here did not merely reflect a desperately poor Bulgaria team, beaten 6-0 by England in this Euro 2020 qualifier, but also punishment inflicted for racist incidents against Kosovo and the Czech Republic in June.

The pre-match sub-plot to this highly charged occasion was provided by the fine detail of Uefa's three-pronged protocol on racism, with Gareth Southgate briefing his players in the past week after they were abused in Montenegro in March and aware that it could be enforced here.

Sadly, it was invoked inside 28 minutes on a night as shameful as many long-time observers can remember, even those of us who were present in Podgorica earlier in this qualifying campaign and have experienced it elsewhere.

This was the night the protocol was put to the test - almost to the ultimate point that would have seen an international football match abandoned because of racism.

Some would argue, a point England manager Southgate acknowledged, that England's players could have made the ultimate statement by walking off but there is the counter-argument that this almost hands some sort of twisted victory to the abusers.

Tyrone Mings, who had a superb England debut in trying personal circumstances, sounded the first note of alarm with a glance over his shoulder after playing a pass, a clear rebuke to a section of Bulgarian support along one side of the arena.

The Uefa guidance decrees that in the event of racist incidents, the referee will instruct the public address announcer to warn the crowd and if it does not stop the players can be taken off, initially temporarily but potentially permanently.

Croatian referee Ivan Bebek stepped in amid clear concerns from Southgate, his players and backroom staff. 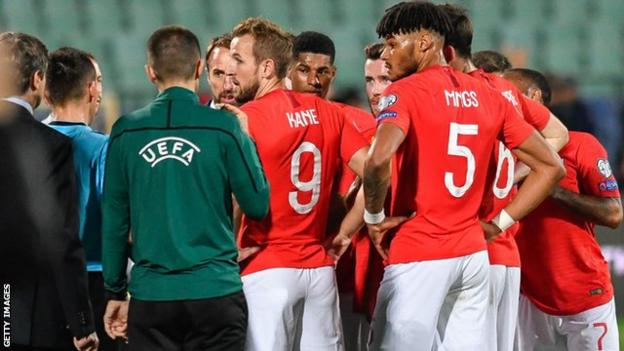 The announcement made it clear the game would be abandoned should such behaviour continue and after a second stoppage it looked like the players would leave the field. The discussions were animated, lengthy, impassioned and heavily laced with high emotions. It did look that the game might not survive until the end.

It now appears only the willingness, determination and level-headedness of England's players ensured the game was finished, aided by belated action from the stadium authorities.

The protocol, such as it is, worked.

England's players were offered the option of walking off but unanimously decided to see it through to an outstanding victory and a fine reflection on their character and attitude.

Sitting in this stadium listening to the poison aimed at England's players, the protocol is clearly not strong enough. The final sanction could be arrived at even quicker. No warnings.

Southgate refused to be drawn on whether the guidelines should be more stringent, expressing his satisfaction that it offered "clarity and protection to the players".

He was also quick to praise the referee and officials for their handling of this tense situation - but it was also clear that any more serious abuse in the second half would have seen history made in the most shameful fashion.

Repeat offenders, and Bulgaria now fall into this category, must now face the threat of expulsion from major tournaments. The current deterrent is clearly not enough.

Football Association chairman Greg Clarke conducted his own post-match media briefing in the bowels of the stadium - and even then some appeared blind to what they had just witnessed.

Clarke spoke of "one of the most appalling nights I have seen in football" and when he talked about "appalling scenes of terrible racism", one Bulgarian journalist interrupted with a shout of "exaggeration".

The same individual later challenged Southgate's version of events, claiming "the game was so friendly". This was only one response but demonstrated a degree of delusion and ignorance of what actually occurred that was beyond comprehension.

This balmy October night in Sofia was preceded by a backdrop of England fears of racism and angry responses from the Bulgarian authorities, who insisted their opponents must get their own house in order before criticising others.

Southgate and Clarke made that very point, but this was a disturbing occasion and it is now up to Uefa to show it has the power to ensure it never happens again. 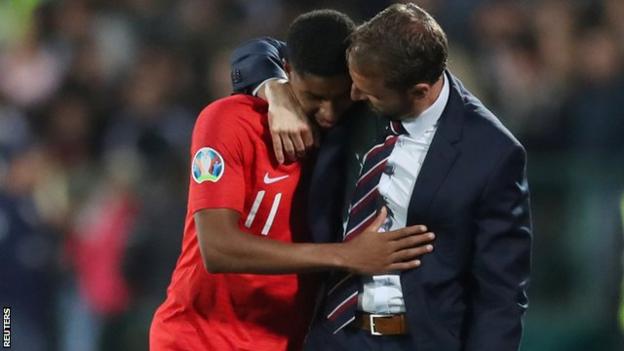 This was a night plucked straight from the bleakest moments, with a group of hard-core black-clad fans situated to the right of the media tribune and behind the technical areas the worst offenders, not simply with words but right-wing gestures. Some of their number held up black "No Respect" hoodies emblazoned with the Uefa badge. There were a number of Nazi salutes.

It was unsavoury and sinister.

Bulgaria's fans reacted furiously to the announcement and it took the removal of this group and the intervention of captain Ivelin Popov, who actually broke off from his team-mates as they went into the tunnel at half-time to go into the crowd and address the fans, presumably offering a plea for decency and common sense.

While the first half was toxic, the second was almost surreal as the main aim, after England's players insisted they wished to carry on and complete the job, was to actually get 90 minutes of international football over the line without abandonment.

It is a sad and sorry state of affairs that is has come to this.

Clarke and the entire FA delegation watched the second half from the tunnel rather than the VIP area in a show of close support, having assured Southgate and his team he would have total backing for whatever action they felt was necessary.

The FA's condemnation was swift and powerful but make no mistake, the jeering that swept around the stadium when the warning was delivered over the tannoy suggested plenty of locals felt there had not been a problem and what we were seeing was an over-reaction. Bulgaria coach Krasimir Balakov said he did not hear any racist chanting.

This in itself was staggering as it emerged later that many of England's diverse party, not just players but backroom staff, were visibly distressed by what they had seen and heard.

The heart went out to all the players who suffered but imagine how Mings must have felt?

This was, or was at least meant to be, the greatest night of his career. He is a player who has overcome serious injury to rebuild his career at Aston Villa - this should have been the crowning moment for a fine professional and mature individual.

Instead, he was left looking over his shoulder in disbelief and anger as he was racially abused. It is to his great credit he showed maturity in every respect.

Raheem Sterling is, sadly, well-practised in handling such ignorance and abuse. The response was his trademark, with two goals and a brilliant individual performance.

This was an outstanding show of unity, dignity and character from every member of the England staff - how sad they had to display it in the first place on a night that plumbed the depths.

If there is anything to be taken from this, it is England's refusal to simply accept this treatment and tackle the abuse inflicted on them in public and with such force.

The most depressing aspect is that this problem still exists and they had to go through this harrowing experience.