Toni Duggan (back row, second from left) celebrated with her Atletico Madrid team-mates following their win over Levante on Saturday

When England forward Toni Duggan faces former club Manchester City in the Champions League on Wednesday, it will bring back memories of a time before Spanish lessons and training sessions with Kieran Trippier.

Duggan, 28, swapped Barcelona for Atletico Madrid this summer after spending four years at City, and will return to the Academy Stadium in the first leg of their last-16 tie.

She won four major titles at City and was part of the England squads that finished third and fourth at the 2015 and 2019 Women's World Cups respectively. 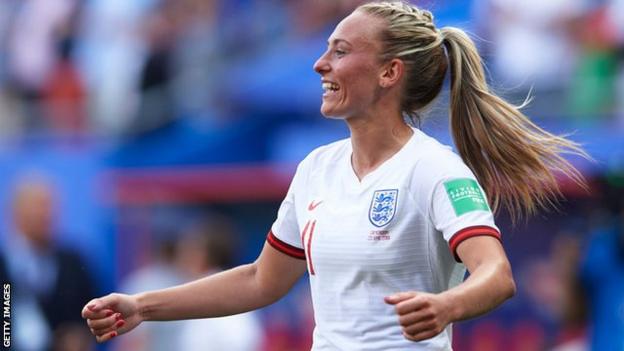 Duggan has scored 22 goals in 76 appearances for England

Liverpool-born Duggan moved to Spain two years ago but could have returned to England when she left Barcelona in the summer.

Manchester United were reportedly an option but after a "crazy" transfer window she chose Spanish champions Atletico.

"It was a bit up in the air. There were opportunities in different countries but Atletico were the right club at the right time. Their style of play suits me down to the ground," Duggan told BBC Sport.

"I've only missed one year competing in the Champions League - that was my first year at Manchester City and it was difficult. My options were quite limited when you weigh that up."

Duggan admits she still "misses home a lot" and it can be "difficult" being away from family.

"I felt that way at Barcelona and I think I miss it even more now," she said. "Football is a short career so you have to take the opportunities when they come.

"Family come out to support me but it's not the same as sitting in the living room with my brothers and my mum, all winding each other up and doing things you don't get to do."

But family isn't the only thing Duggan misses.

"I don't half miss a roast! I found a place in Barcelona and every Sunday I tried to go down there. I need to find one in Madrid."

'The coaching styles are a different level' 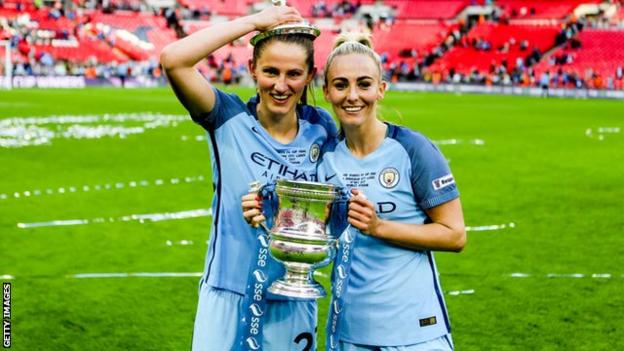 One of Duggan's biggest challenges has been learning the language and after admitting she "couldn't relax" at Barcelona her Spanish has "really improved" in Madrid.

"In Barcelona they complicate it by speaking Catalan as well. There were times when you thought you were doing really well then someone spoke in Catalan and you couldn't understand a word and were a bit confused," said Duggan.

"I wouldn't be too confident doing a full interview in Spanish yet but I can certainly get by."

Duggan says Spain's coaching styles are "a different level" to what she was used to in England.

"A lot of it was with the ball at Barcelona and it's quite similar in Madrid," she said. "All the girls are really technical - more so than in England. They put a big emphasis on that.

"Physically, I don't think the Spanish league is quite at the level of England but it's been really interesting seeing the skills that they do.

"Even the difference between Atletico and Barcelona - their styles are so different."

The women's game is "on the up" in Spain says Duggan, who scored for former club Barcelona in a 2-0 win over Atletico in front of 60,739 fans at the Wanda Metropolitano last season - a record for a top-flight domestic women's game in Europe.

Training with Trippier and setting an example

The pair exchanged regular messages before finally catching up at a joint training session this month.

"I've spoken to him quite a bit," said Duggan. "We were at the same complex for the first few weeks but I kept missing him.

"I'd see Diego Costa and the other players but never seemed to catch Kieran.

"We had a training session two weeks ago and I managed to catch up with him then.

"His family are over here and he is taking Spanish lessons - he is really trying hard in that respect. He said the manager speaks so fast, he wants to try and pick it up more.

"He is really happy with the decision that he's made. It's nice that I have that support from him now and obviously, I give it to him too."

More English players are moving to Europe and Duggan says it's because players like England's Lucy Bronze and Izzy Christiansen - who joined Champions League winners Lyon in 2017 and 2018 respectively - have done well.

"I think it's really good for the English game for people to go away and test themselves. It does challenge you and improve you as a person. That can only help England as a national team.

"People are not as nervous as they were in the past. It's the same in the men's game because Jadon [Sancho] is doing really well at Borussia Dortmund and now Trippier here at Atletico."

'I need to win that battle' 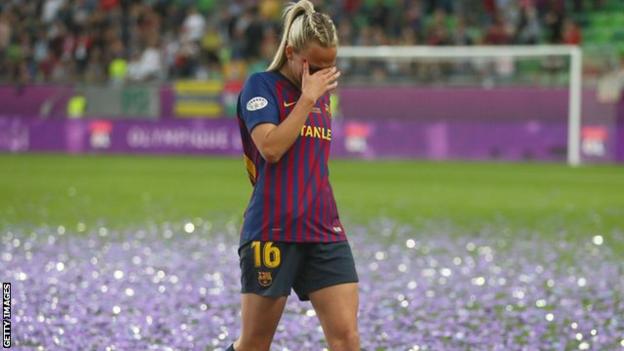 But Barcelona's 4-1 defeat by Lyon left her "devastated" and "embarrassed".

"England were on duty before the World Cup and I knew all of the team were sitting there watching on a big screen," she says.

"I couldn't get that out of my head - the night after the game it was all I could think about.

"When I turned up to the England camp afterwards, people were saying 'well done for getting that far'. But for me, it felt like that wasn't good enough. You go to finals to win it."

A quarter-final place is up for grabs against City and when asked if playing against her England team-mates adds competitiveness, Duggan said: "Yes - I want to win.

"I'm sure City will want some revenge [for last season's defeat by Atletico]. I don't want to turn up to the next international break while they are talking about being in the next round of the Champions League and I'm not.

Survey suggests crowds may be 34 percent down