The hosts won four games from four - including victories over Ireland and Scotland - to top Pool A and reach the knockout stages for the first time.

It has lifted Jamie Joseph's side to seventh in the world rankings.

"For me, we've already made our goal. No-one expected us to make the top eight," said Helu.

"We've already proved everyone wrong. No-one will even look at us to win this game this week, so it's another chance to prove people wrong.

"We love to give everything for our fans, knowing they will always support us."

It is estimated more than 60 million people watched the Brave Blossoms' dramatic 28-21 win over Scotland that secured their last-eight spot, while the country has sold out of replica home shirts.

"Just knowing and finding out how many people were watching the game, that is a huge boost," added Tonga-born Helu, who has won 16 caps for Japan.

"We always know that if we keep winning lots of people will support us. It adds extra motivation.

"It's such a good feeling. Just the energy that the fans bring. It definitely boosts us, that's for sure."

Japan shocked the Springboks in the pool stages four years ago, but went down 41-7 to the tournament's second-favourites in a warm-up match in Kumagaya in September.

Helu says the hosts need to stick to their gameplan and be "smarter in how we attack" this time around.

"We're trying to identify specific defenders and exploit them," he explained.

"South Africa are different from other teams; they did more work as a group. They come in twos and threes when they attack. 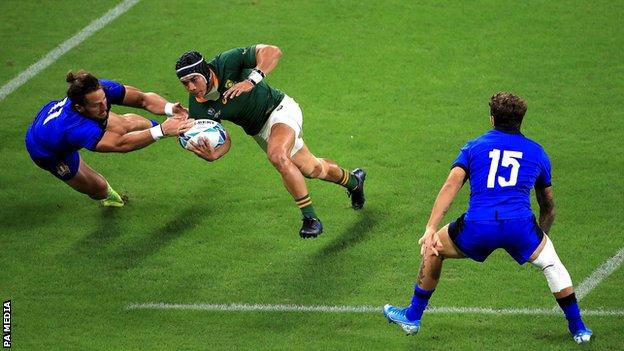 South Africa wing Cheslin Kolbe says the Springboks will not be thinking about that defeat in 2015 and believes the game is "more technical" than in previous World Cups.

The 25-year-old Toulouse star is also looking forward to lining up against Japan wingers Kenki Fukuoka and Kotaro Matsushima, who have contributed nine tries between them so far this tournament.

"I played against Fukuoka at the Rio Olympics. He's a really good player and is very powerful and explosive.

"I also played against Matsushima back in 2012 when he was playing in the Currie Cup in South Africa. I know he loves to run with the ball and have a lot of freedom.

"But what happens on Sunday will come down to the team that wants it the most.

"Japan are playing some really exciting rugby. They are giving the ball a lot of air and they want to stretch your defence structures.

"That is a style I love to play, but as a team we have our own plan that we will try to implement."

Female referees in English football up 72%