Super League sides dominate the leading positions in three of the four groups after two rounds of matches but United's victory over reigning cup holders City has thrown their pool wide open.

Casey Stoney's WSL newcomers - promoted as Championship winners last season - moved level on points with City in Group C, despite having played a game fewer, but both are three points behind leaders Birmingham.

As well as casting doubt over which two teams will progress from the group, United's win was also a measure of swift revenge for their 1-0 defeat by City in their first WSL game in September.

The victory was fully deserved, with both of United's goals coming before Walsh's dismissal, and only Ellie Roebuck's fingertip save from Hanson prevented the margin of victory being greater. 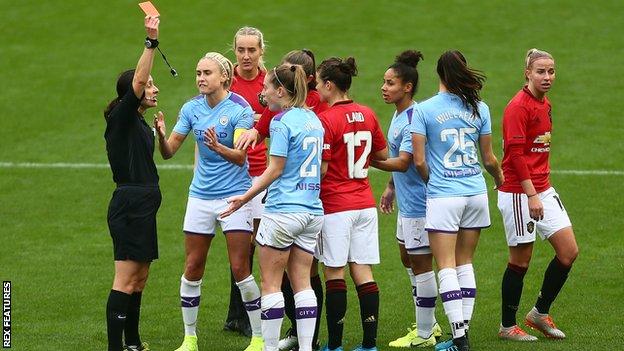 City fielded close to the same side that drew 1-1 with Atletico Madrid in the Women's Champions League on Wednesday, making only two changes - and one of those was enforced after defender Aoife Mannion damaged knee ligaments in that midweek match.

But despite clearly taking the competition seriously, City failed to produce an effort of note to test United keeper Mary Earps as they tamely slipped to a first defeat of the season.

In the next round of matches in a fortnight's time, Nick Cushing's City host Birmingham, who top the group after doubles from Lucy Staniforth and Rachel Williams helped them to a 5-1 win at Leicester.

Championship side Lewes threatened an upset in Group D when they led 2-1 at WSL side Reading but England's most-capped player Fara Williams completed a hat-trick as the Royals recovered to win 3-2.

Chelsea are second in that section, behind Reading on goals scored, after Beth England's double helped them beat Crystal Palace 3-0, while West Ham produced the fight-back of the day against Tottenham.

Trailing 2-0 in stoppage time, goals from Martha Tomas and Kenza Dali earned the Hammers a point - but Spurs won 4-2 on penalties to claim the extra bonus point awarded after a draw.

Kirsty Linnett scored a hat-trick as Liverpool won 5-1 at Championship side Coventry United in Group A.

Durham won 3-1 at Blackburn to top that group, while Aston Villa beat Sheffield United by the same score in another all-Championship meeting.

Bristol City are also on maximum points in that group after edging out WSL rivals Brighton, while London Bees claimed a comfortable 3-0 derby win at London City Lionesses.

EC to meet on new season and Congress

Pep at a loss to explain Man City defeats

'Messi will end his career at Barcelona'