Kieran Read has made 125 appearances for New Zealand

New Zealand head coach Steve Hansen is "100% confident" captain Kieran Read will be fit for Saturday's World Cup semi-final against England after the back row missed training on Tuesday.

Read has a tight calf and so rode a bike in the gym instead of training in the Tokyo rain.

The 33-year-old is aiming to win his third World Cup after leading the All Blacks to an emphatic 46-14 victory against Ireland in the quarter-finals.

"We just weren't prepared to put him on a wet track today."

The All Blacks scored seven tries against Ireland on Saturday, including one when they were down to 14 men late in the game.

But Hansen says his side must "do something England haven't seen before" when the teams meet in Yokohama.

"It's our job to do something different," he said.

"You practise it, implement it. If it works you're a superstar and if it doesn't you're an idiot.

"England would say they can tuck the ball up their jersey and do that game and they'll say that they can run it. We can match it with our forward pack.

"I don't think the forward pack gets as much credit as it should because it's overridden by the other things we do. We want to run with the ball and we've got a good kicking game too." 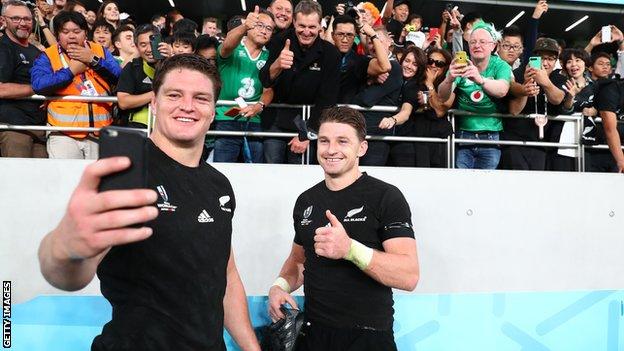 Brothers Scott and Beauden Barrett are room-mates this week

Lock Scott Barrett was one of three brothers on the field by the end of New Zealand's win against Ireland, alongside siblings Beauden and Jordie.

It was not the first time they had teamed up for their country. The Barretts became the first sibling trio to start in a World Cup for New Zealand in a pool-stage game against Canada three weeks ago.

And Scott and Beauden have the chance to spend time together off the field this week, as they are sharing a room for the first time in 17 years.

"This week I've roomed with Beaudie for the first time since 2002, when he was in the top bunk," Scott joked.

"Back then, there were two sets of bunks and there were four of us in there. He's a key driver of our game so to room with him is great.

"It's my first semi-final and we're considering it as a final. It is a huge week."

Playing against Heinz 'a bit weird'

Fellow lock Sam Whitelock will also be sharing the field with a familiar face on Saturday, but his will be on the opposing team.

Whitelock played alongside England's New Zealand-born scrum-half Willi Heinz at Super Rugby side Crusaders and provincial side Canterbury until Heinz moved to Premiership team Gloucester in 2015.

Whitelock's wife stayed with Heinz, who qualifies for England through his grandmother, while the All Blacks forward was playing in the 2015 World Cup in England so he says they "know each other pretty well".

"I haven't had a message from him [this week] yet," Whitelock said. "We'll leave it out there on the field.

"I haven't played against him while he's been playing for England so it's a little bit weird."

India wrap up series whitewash over SA
Next Item