What does the end of the World Cup signify for players?

Elation for a few, disappointment for most, but for all a parting of ways of team-mates who have formed a special bond during an unforgettable tournament.

Some of those trips back home take contrasting routes, like those of Samoa internationals Kieron Fonotia and Belgium Tuatagaloa.

Centre Fonotia is straight back to a Scarlets team who are flying in the Pro14 with four wins from five.

Wing Tuatagaloa is currently without a club contract after being made to choose between club and country by a French team reluctant to support his international ambitions.

So he is straight back to sevens duties as an under-resourced Samoa try to qualify for the 2020 Tokyo Olympics.

"I got offered a contract playing for a Pro D2 club in France but once I told them I wanted to play for Samoa, they didn't want to support that," said Tuatagaloa.

"They said it's too hard a prospect to work with. I declined the offer and despite the results in the World Cup, it's the best decision I've ever made."

Whilst the Samoans' pride in the jersey is unquestionable, the results have been underwhelming. 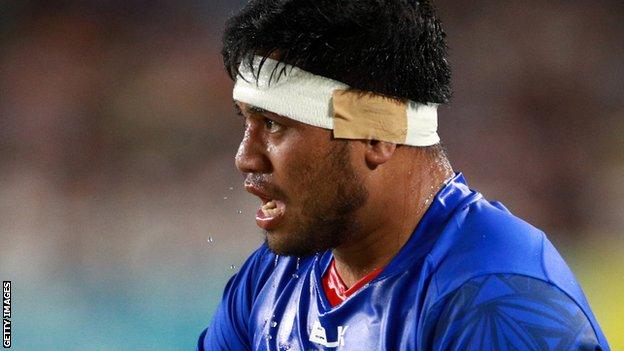 Samoa's only win in the tournament came against Russia as Fonotia featured as a substitute in three pool games.

Whilst he admits to feeling "sour" at limited opportunities, the Scarlets centre is keen to address a much more deep-rooted problem.

"I'd like to have the chance to all stick together and spend a bit of time with each other," he said at the Parc y Scarlets training facility in Llanelli.

"You go into a team and you've never played with a guy before or seen him play.

"There's no consistency. Coaches change a lot, since I've been there there's been three head coaches.

"If they stick with some of the same people you may start seeing better results because you look at the talent pool and there are players there."

The disillusion in his voice is clear and he admits he is not sure if he will play international rugby again.

Current Samoa coach Steve Jackson was appointed 11 months before the start of the Rugby World Cup in Japan.

That followed previous coach Fuimaono Titimaea Tafua being forced to re-apply for - and fail to get - his job due to shortcomings in the original recruitment process.

The Samoan Rugby Union declined a request for an interview with Jackson, citing his 'uncertain future' with Samoa as the reason. His position is up for review in November.

Whilst Tuatagaloa admits the SRU could do more to help themselves, he is also calling on the aid of other nations and would love to see more Tests against tougher opposition.

"It would honestly be a dream come true to have England in Samoa. If only to give our younger generation a chance to see them play," he said.

Samoa played only six tests against Tier One nations in the four years leading up to the World Cup.

Even when they do secure away fixtures, Tier One host nations are under no obligation to share gate receipts with touring teams. England have never played in Samoa.

Funding, profit share models, relaxing eligibility rules to allow Pacific stars who have already played for other nations to come back and play for their home nations are all avenues to be explored, as is the possibility of creating professional teams in Super Rugby and changing that league's contractual demands.

But according to former Samoa forward Dan Leo, who is the CEO of Pacific Rugby Welfare, it all starts with altering funding models.

"The profits from world rugby are upside down. Roughly 55% of the profit gets reinvested back to the top 10 sides, it should be spun on its head.

"There's currently no compensation for Samoans when you play international rugby, unlike the Welsh.

It's only club contacts which puts bread on the table. It means clubs are less incentivised to sign Pacific players. Rugby's a business these days.

"When it comes to gate receipts even a 5% share would be massive from Tier One nations, but the reality is they invest their profit into their own market. The only people who have a mandate to grow the game are World Rugby."

Samoa is a team with a rich rugby history.

It is the country that produced legends like Michael Jones, Frank Bunce and Pat Lam.

Its team knocked Wales out of the pool stages in the 1991 World Cup and also beat them in Cardiff in 1999.

They have beaten Scotland and Italy as well as Australia in their own backyard.

For Leo, Samoan rugby "has fallen off a cliff".

"It's good to come to a whole different environment with the Scarlets, it's a real positive environment to be a part of.

(Coach) Brad Mooar brings so much energy and excitement, every day is another day in Disneyland under Brad Mooar. It's exciting to work with a friend again."

It may not be the Magic Kingdom yet for Tuatagaola who is currently working hard to secure a professional contract.

"We are currently in talks, but for now it's good to be back with the sevens boys," he said.

"Whichever code, I can't wait to pull on the jersey and play again."

Avoid hooliganism ahead of Hearts,Kotoko

No mountain too high for Impi Visser