Formula 1 launches a plan to become carbon neutral by 2030

Formula 1 has launched a plan to become carbon neutral by 2030.

The intention is to wipe out the carbon footprint of activity at race tracks, including road and air transport of staff and equipment to the events.

F1 says it will "move to ultra-efficient logistics and travel and 100% renewably powered offices, facilities and factories" and offset emissions that cannot be cut.

F1 said as a first step it would begin carbon-reduction projects immediately.

It added that it will make all events "sustainable" by 2025, including eliminating single-use plastics and ensuring all waste is reused, recycled or composted.

The high-tech turbo hybrid power-units used to power F1 cars since 2014 are the most efficient car engines in the world in terms of the percentage of fuel energy that is converted into power, a measurement known as thermal efficiency.

F1 engines have a thermal efficiency rating of 50%, whereas a road-car petrol engine is generally in the region of 30%.

The current engines are in line to continue until the end of 2025, and F1 is to look at ways of ensuring that whatever specification of engine is used from 2026 takes another step forward in efficiency.

The sport's owners added that they hoped to work with the automotive industry to apply the lessons of F1's engines to create "the world's first net-zero carbon hybrid internal combustion engine".

In-depth conversations with road-car manufacturers on this area have not yet begun but they will focus on the development of synthetic fuels, which use carbon captured from the air, farm waste or biomass.

F1 says it has come up with its plan to have a net-zero carbon footprint "after 12 months of intense work with motorsport's governing body the FIA, sustainability experts, F1 teams, promoters and partners".

Instigating the plans will require the assistance of the teams, some of whom employ more than 1,000 people to design, develop, build and race the cars that take part in more than 20 grands prix a year. 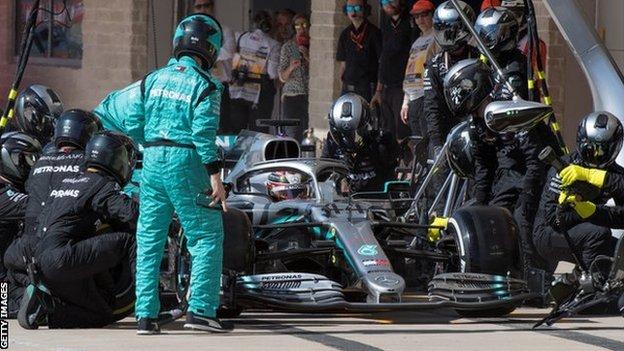 Mercedes, who have won the constructors title six times in a row, say they are working on reducing their carbon footprint, while world Lewis Champion sold his private plane last year and has spoken out on environmental issues

F1 says all have signed up to the project. And some have already started working towards this goal.

World champions Mercedes, for example, say they have been powering their two F1 factories in the UK entirely by renewable energy since early October and that they are on target to have net-zero carbon emissions by the end of next year through a combination of reducing CO2 emissions and offsetting.

Chase Carey, the chairman and chief executive of F1, said: "Over its 70-year history, F1 has pioneered numerous technologies and innovations that have positively contributed to society and helped to combat carbon emissions.

"From ground-breaking aerodynamics to improved brake designs, the progress led by F1 teams has benefited hundreds of millions of cars on the road today.

"Few people know that the current F1 hybrid power unit is the most efficient in the world, delivering more power using less fuel, and hence CO2, than any other car.

"We believe F1 can continue to be a leader for the auto industry and work with the energy and automotive sector to deliver the world's first net-zero carbon hybrid internal combustion engine that hugely reduces carbon emissions around the world."

FIA president Jean Todt said his organisation and F1 were "committed to driving development and ensuring motorsport grows as a laboratory for environmentally beneficial innovations".

How will Formula 1 do it?

F1 plans to offset emissions through a combination of replanting trees and using the engineering knowhow in the sport to develop new technologies that can capture carbon from the atmosphere.

It calculated the sport's total carbon emissions in 2018 as 256,551 tonnes, not including fans' transport to races, comprising:

'You shouldn't be afraid to speak out for positive change'

The six-time champion has pledged to ensure his life and business activities are carbon-neutral by the end of the year, is working with Mercedes to make relevant changes and after selling his private plane last year is reducing flying as much as possible.

After being accused of hypocrisy because of his role in F1 and the number of flights he has to take as part of his job, Hamilton admitted the subject was "not easy" but added: "That doesn't mean you should be afraid to speak out for positive change."

His position was backed by a number of his leading competitors, including four-time world champion Sebastian Vettel.

The Ferrari driver said last month: "It is very difficult for us to have acceptance from the outside because we don't have the smallest [carbon] footprint. The races are around the world and we do have to travel.

"But I feel F1 should do more. It is a worldwide operating platform and we should send a more positive message."