Davis Cup finals 2019: How the new event in Madrid will look

"Sometimes things have to change, or they have the risk to die," was Gerard Pique's blunt reasoning for the controversial reform of the Davis Cup.

The Barcelona footballer has overseen the transformation of the 119-year-old competition into a season-ending finals featuring 18 nations, which starts in Madrid on Monday.

Britain have been given a wildcard and their five-man squad, consisting of Andy Murray, Dan Evans, Kyle Edmund, Jamie Murray and Neal Skupski, face the Netherlands and Kazakhstan in what is a favourable group for the 2015 winners.

Swiss great Roger Federer will not play after his nation failed to qualify, while some ATP players have questioned the involvement of a footballer in the dismantling of a tennis tradition.

"We're getting run by a Spanish football player. That's like me coming out and making changes to the Champions League," Australia captain Lleyton Hewitt said earlier this year.

Britain's Andy Murray was more diplomatic, saying he was "open to change" and urging everyone to give the new format "a chance".

'Change was necessary' - why the Davis Cup has been revamped

The Davis Cup is one of the world's largest international team competitions, with 132 nations taking part in 2018.

Between 1981 and 2018, 16 nations competed in the World Group in a straight knockout, with the remaining countries divided into three regional zones.

It was played in February, April, September and November at home and away venues, with each World Group tie played over three days in a best-of-five tie of five-set matches.

However, an increasing number of top players have skipped matches in recent years to ease their schedule.

That led to controversial proposals to revamp the tournament and turn it into a season-ending 18-team event, as part of a 25-year £2.15bn plan funded by the Kosmos investment group fronted by Pique.

"Top players were not playing and you could understand the reality that if you were going to get to the finals, it was going to take up eight weeks of your year.

"It can be a struggle physically and geographically. Top players were playing less and less, and so they had to take action." 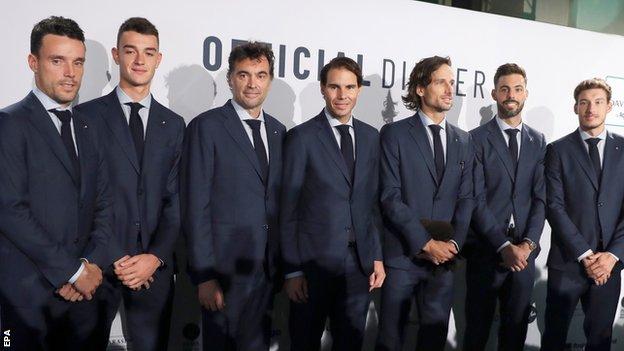 The Spain team, including Rafael Nadal (centre), will play in front of a sell-out crowd for their group matches - but tickets are still available for the majority of other ties

Whether to back the plans, or stick with the previous format, was put to the vote at the International Tennis Federation's (ITF) annual general meeting in August 2018.

A two-thirds majority among the 140 nations was needed and 71% backed the proposals.

At the reformed event, matches will be played over the best of three sets in a World Cup-style tournament to determine the champions.

The finals - to be staged on hard courts at the Caja Magica in Madrid - will be a round-robin format going into a knockout phase, with ties consisting of two singles and one doubles rubber.

The 18 nations are split into six groups of three, with the group winners and two best-placed runners-up progressing to the quarter-finals.

The two semi-finals will be played on Saturday, 23 November with the two winners going through to the final on Sunday, 24 November.

Murray, who was instrumental in Britain lifting the Davis Cup in 2015, has expressed some doubts about the new-look finals and says he will pass judgement once the tournament is over.

The former world number one is particularly concerned the Madrid finals will be devoid of the tribal and boisterous atmosphere for which the home-and-away format was renowned.

"The one thing I loved about the Davis Cup before was the atmosphere you played the matches in and the home and away element. They are some of the best atmospheres I've played in and I'll always remember them.

"I don't think that will be replicated in Madrid but having all the players there competing for their countries in one place will be a unique experience." 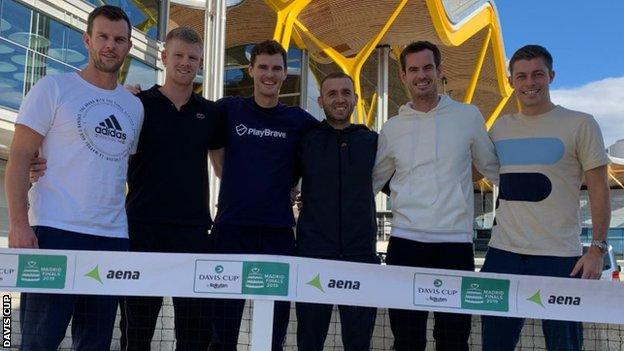 No Federer or Medvedev - who is playing?

Following the passing of the new proposals in August 2018, 1987 Wimbledon champion Pat Cash said organisers were "fooling themselves" if they thought the world's best players would turn up for a team tournament at the end of an already energy-sapping year.

Nevertheless there are plenty of big names set to play with 11 of the world's 20 best singles players competing, including Serbia's Novak Djokovic and Spain's Rafael Nadal, along with Britain's three-time Grand Slam champion Murray.

Swiss great Federer will not be playing in Madrid after his nation was not given a wildcard, although that appears to be as a result of the 20-time Grand Slam champion seemingly not seeing eye-to-eye with Pique over the revamp.

Federer was reported by Swiss media to have said it was "strange" to see a footballer "come into our world", disdainfully adding the Davis Cup should not "become the Pique Cup".

German world number seven Alexander Zverev was clear from the outset that he would not compete and has instead decided to play in an exhibition match against Federer - whose management company he is signed to - in Mexico.

"Playing at one week, at one venue, deciding it all, is not the Davis Cup. I hope people realise the Davis Cup is more than just money; it's history."

Other notable absentees are Austrian world number four Dominic Thiem and Greek world number six Stefanos Tsitsipas as a result of their nations not qualifying or being given wildcards, while Russia's US Open finalist Daniil Medvedev pulled out at the weekend citing fatigue after a long season.

How does the ATP Cup affect the Davis Cup?

What many onlookers from inside and outside tennis are struggling to fathom is why another national team knockout competition is taking place six weeks after the Davis Cup in January.

Created by the ATP, the 24-nation event dangles the carrot of 750 ranking points and a prize pot of 22m Australian dollars (£11.6m) for the world's best players.

That will take place in Australia at the start of January, with another benefit for the players being it will act as a warm-up event for the Australian Open later in the month.

But the creation of two separate, but very similar, events at either end of what is already a long, gruelling season has left some players having to make tough choices.

Pique says he "doesn't know" if tennis will be able to accommodate both events over the longer term, saying he remains open to dialogue with the men's tour about amalgamating the two competitions.

"History says both events will happen," the 32-year-old footballer told the Observer.

"But I have always said our idea is to open the door with the ATP to arrive at a deal. I think that this is the logical step for the future."

Schedule - who plays when?