Brazilian Grand Prix: Ferrari's 'silly' problem is a rather large one

It took 20 races, but finally the inevitable happened at Ferrari at the Brazilian Grand Prix. Their drivers Charles Leclerc and Sebastian Vettel collided, taking both out of the race and leaving the team with a rather large problem on their hands.

"Silly" was the word team boss Mattia Binotto used to describe the incident. In his cool, detached way, he deflected a series of opportunities to lay the blame, and said he would reconvene with Vettel and Leclerc at the factory in Maranello this week to analyse what happened, come to some form of judgement and decide on next steps.

The question now for Binotto is what he does next and how he manages what has become the most combustible driver pairing in F1, not so much for the one remaining race this year, but to prevent the internal competition from derailing their 2020 campaign.

The collision occurred on lap 66 of a frenetic race, with five to go, as the two Ferrari drivers found themselves at the back of a queue of cars being held up by Lewis Hamilton's Mercedes, running second to Red Bull's Max Verstappen on much older tyres than those behind.

Ahead of them, and behind Hamilton, was Red Bull's Alexander Albon, who was trying to pass the Mercedes while also holding back Vettel, who in turn had Leclerc behind him.

Leclerc saw an opportunity and dived for the inside of Vettel into Turn One. It was a daring move, aggressive certainly, but absolutely clean. But not one that Vettel was likely to take lying down.

The German had use of the DRS overtaking aid on the run towards Turn Four, and Leclerc moved to the inside to defend his position, leaving just enough room for Vettel - but not an inch more - on the outside.

Approaching the corner, Vettel then moved across on his team-mate, his left rear tyre touching Leclerc's front right. Although light, the contact broke Leclerc's suspension and ripped the tyre off the rim, and also gave Vettel a right-rear puncture.

Both cars retired from the race, prompting the final safety car that triggered a bonkers last two laps, in which Mercedes did what technical director James Allison described as "plain dumb" in pitting Hamilton for fresh tyres, the world champion collided with Albon, costing the Anglo-Thai a first podium, and Toro Rosso's Pierre Gasly finished a wholly unexpected second.

What did the Ferrari drivers say?

Vettel did what he always does in controversial situations and kept his public pronouncements to a limit, repeating the same few sentences in every interview.

Whose fault was it?

"It doesn't matter now," Vettel said. "We both didn't finish the race, which is bad for us as a team."

"There is not so much to say, I think it's pretty clear. But obviously it's bitter and a shame for the team to lose both cars. I didn't have much space on the right. I had a better run out of the chicane and tried to pass and then we touched." 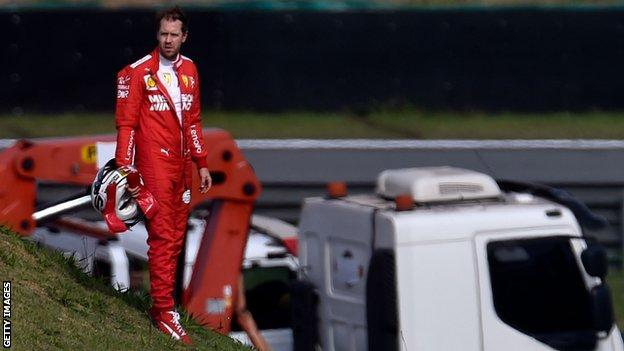 Leclerc was a little more forthcoming.

"We will have to analyse better the crash," he said. "I overtook in Turn One, then on the run to Turn Four I closed the door.

"I was aware he was on the outside. I left little space but enough for him and then I think he tried to squeeze me a little bit towards the inside and we were very close so we touched straight away. Very disappointing to end a race like this."

The stewards - to the surprise of some, given that Vettel had clearly changed his line and instigated a collision - ruled it a racing incident and took no further action.

How the two Ferrari drivers came to this juncture is a rather longer story than the events of this weekend.

To those on the outside, it was only a matter of time before something like this happened. The pressure inside Ferrari has been building all year as Leclerc has established himself as a star and threatened - and perhaps usurped already - Vettel's seniority in the team. Vettel, meanwhile, is a proud man who, in the car, is as stubborn as they come when it comes to protecting his competitive position.

All year, Binotto has been doing his best to manage the inevitably tense situation.

Ferrari started the season with Binotto saying Vettel, as the senior driver, would have priority in any "50-50 decisions", and the first few races passed with a series of team-order calls, the majority in Vettel's favour. 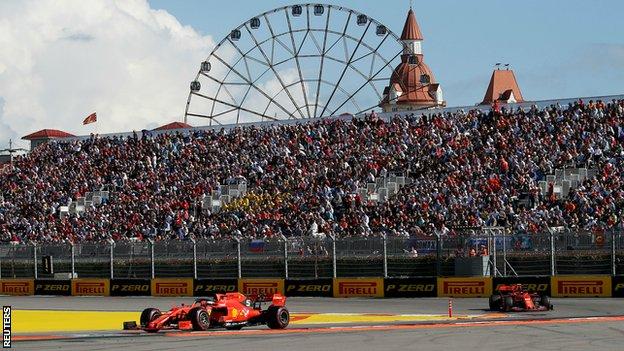 Leclerc said he accepted the situation but also that he would do his best to change it. And as soon as the second race in Bahrain, he dominated Vettel and everyone else and was on the way to a superb victory when his engine developed a problem in the closing stages.

Tensions cooled after the first few races, as it became apparent that Ferrari did not have the pace to mount a title challenge, and Vettel established the upper hand as Leclerc's chances were comprised by a few too many mistakes in qualifying, usually by him, but sometimes also by the team.

But at the French Grand Prix in June, Leclerc turned a corner and went on a run of nine races in which he out-qualified Vettel, while the German continued to make the sort of pressure errors that have blighted his last three years at Ferrari.

Leclerc won twice in Belgium and Italy as Ferrari made a flying start to the second part of the season. In Monza, there was a controversy when Leclerc failed to do his part of a prearranged team strategy for the drivers to give each other tows in qualifying, which angered Vettel.

Vettel then won in Singapore, but only after the team inadvertently got him ahead of Leclerc, who has been leading from pole position, by pitting Vettel first to try to pass Hamilton for second place.

Then in Russia Vettel directly refused team orders to let Leclerc by - which had been agreed pre-race following a decision to get Leclerc, again on pole, to let Vettel past with a slipstream into the first corner, so both Ferraris could be running one-two in front of Hamilton.

Since then, Vettel has been on a bit of a run, and has out-qualified Leclerc in the last two races, and the battle for primacy at Ferrari has taken another twist. And now this.

It's not hard to work out what has happened here. Vettel will not have taken kindly to being passed by his team-mate. He has then made what many will see as a misjudgement in trying to reclaim the position and been too aggressive in moving over on Leclerc.

As Leclerc put it: "The result was a huge disaster but the incident itself was a very small touch. It's unfortunate."

Vettel has form at this sort of thing. Those with long-ish memories will recall the Turkish Grand Prix in 2010, when in trying to pass Red Bull team-mate Mark Webber, he moved over and the two touched, handing a one-two to McLaren drivers Lewis Hamilton and Jenson Button. 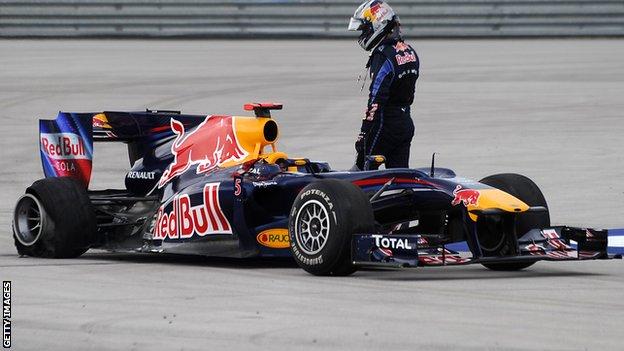 In 2010 Vettel had this to say about his collision with team-mate Webber: "I dived down the inside and I had the corner."

And in the past two years, Vettel has become infamous for making a series of errors in racing situations. Many will see this as the latest example.

After Russia, the two Ferrari drivers were sat down by Binotto to discuss the situation. But the issue for Ferrari is that in the past Vettel has proven time and again that he is reluctant to be managed - unless the situation is in his favour.

What will Binotto do about this aspect of his former number one driver, he was asked?

"It is not a matter of managing," Binotto said. "It is matter of recognising what has been the actions and mistakes. Whether you are a driver or engineer or whatever, recognising mistakes is important because it can only make you better.

"It is not for me to blame them, it is for them to recognise it."

On the other hand, while Vettel undoubtedly triggered the incident, Leclerc - who was making his own point in the psychological and on-track battle between the two - may come to conclude that in pinching his team-mate so close to the grass, he was making himself vulnerable to exactly the kind of move Vettel made.

"We need to clarify within the team what is silly and what is not," Binotto said, "where is the limit of the actions. But when you have a crash, something was wrong, no doubt. When you are free to fight, it is a driving matter how much you can take the risk but today the risk was not necessary."

In Brazil, the two Ferrari drivers were free to race because the team had secured second place in the constructors' championship and all that was left was to decide which finished ahead in the drivers'.

Heading into Brazil, Leclerc was third in the championship, ahead of Red Bull's Max Verstappen and Vettel. Verstappen's superb win at Interlagos, coupled with the retirement of the Ferrari drivers, has promoted the Dutchman to third and given him an 11-point cushion on Leclerc, a margin that the Monegasque will not find it easy to overhaul at the final race of the season in Abu Dhabi on 1 December.

More important for Binotto, though, is how he handles the Vettel-Leclerc situation going into 2020. 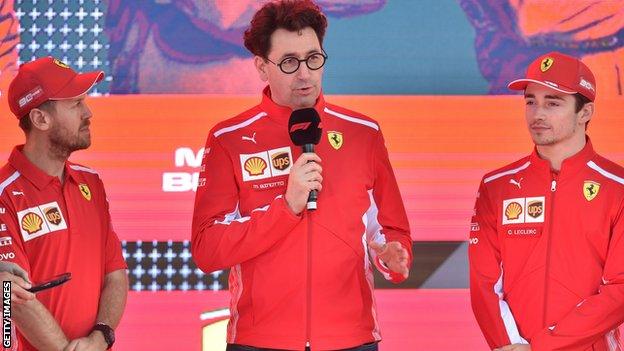 Leclerc is likely to finish this year ahead of Vettel on points, on race wins, on pole positions, and on their qualifying head-to-head, despite the advantages Vettel had at the beginning of the year, and despite the fact that he is in his first year with the team and only in his second in F1, against a four-time champion with 53 wins.

To all intents and purposes, Leclerc is now Ferrari's lead driver, and Binotto cannot go into next year giving Vettel priority. But nor will Vettel accept it being given to Leclerc. He just doesn't work that way. He believes his status in the sport demands more.

As for Binotto, he has a number of times this year described having two such closely matched and competitive drivers as "a luxury". Does he still think that way?

"I am still convinced it is a luxury because they are both very good drivers," he said. "They both represent a benchmark for each other and they have improved during the season.

"Seb in the second half has been very fast. What happened today, I would say it was even lucky it happened this season because there will be an opportunity to clarify with them for it not to happen next year.

"Currently they have a good relations and are going well together. Certainly what happened today may not help. But I don't think there is a drama at all and I see it more as an opportunity in view of next year to clarify what is needed."

Motherwell's Donnelly out for two months

O'Neill has no fears over juggling Stoke job
Next Item