Young Scot Robert MacIntyre provides a compelling subplot when the European Tour season reaches its climax in the Middle East this week.

The 23-year-old from Oban is on the verge of completing a sensational debut campaign on the main circuit - leading the charge to be crowned top newcomer and claim the prestigious Rookie of the Year title.

It has been a remarkable season for the left-hander. Indeed he must already be regarded as the finest Scottish "lefty" golf has ever seen. It is a struggle to recall any others who have made such an impact at the top of the game.

MacIntyre has climbed 174 places in the world rankings during a year that has yielded seven top 10s, including successive runner-up finishes at the British Masters and Made in Denmark events in early summer.

The burly Scotsman was also second at the European Open, but arguably his finest performance came on his major debut when he was tied sixth at The Open at Royal Portrush.

With rounds of 68, 72, 71 and 68 he showed a promising taste for the big time, finishing only four strokes behind Tommy Fleetwood, who was a distant second to runaway champion Shane Lowry.

No wonder MacIntyre was bursting with pride after finishing his Open debut with a birdie to go five under par.

"I'm proud of the way I handled the whole week," he said. "From start to finish, from my preparation all the way through to the last putt."

Not bad for a former Scottish amateur champion and someone who is now his country's leading player in the global standings. He is also Scotland's only representative in the season-ending DP World Tour Championship this week. 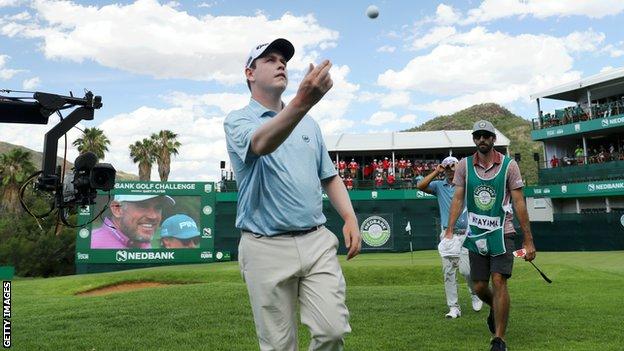 Those who know him best talk of his quiet determination. He certainly has an X-factor that brings his best golf to the fore when it is most needed.

Last year he was the wrong side of the cutline in the penultimate event on the Challenge Tour. His European Tour card was not yet sealed and he needed something special.

MacIntyre duly despatched a 270-yard three wood to 15 feet and holed the putt to make the weekend, before storming to second spot behind Frenchman Victor Perez, who coincidentally is one of his rivals for the rookie award this week.

And the Scot comes into the finale at Jumeirah Golf Estates in fine form. MacIntyre was seventh in Turkey at the start of this month and last week recovered brilliantly to finish eighth at the Nedbank Challenge in South Africa.

Closing rounds of 65 and 68 at the Gary Player Country Club were emblematic of the fighting qualities of the legendary host at Sun City.

Mr Player would surely have approved when MacIntyre recovered so stirringly after ending his second round with a quadruple-bogey nine. He might have wilted the next day but instead embarked on a devastating spell of eight birdies in 14 holes.

His high finish helped the Scot leapfrog American Kurt Kitayama, his closest rival for the rookie crown. Intriguingly, these two newcomers sit 11th and 12th in the Race to Dubai and are destined to partner each other in the first round on Thursday.

Both want to claim the Sir Henry Cotton Rookie of the Year award and join the likes of Jon Rahm, Brooks Koepka, Sergio Garcia, Nick Faldo and Sandy Lyle in landing the coveted accolade.

"Winning Rookie of the Year would mean everything," MacIntyre said after his spirited finish in South Africa. "That's what you play golf for - the rewards."

Indeed, MacIntyre could compete for the $5m (£3.8m) bonus pool, which will be split by the top five money-earners in the Race to Dubai. There is a world record $3m waiting for the tournament winner at this lucrative season finale. 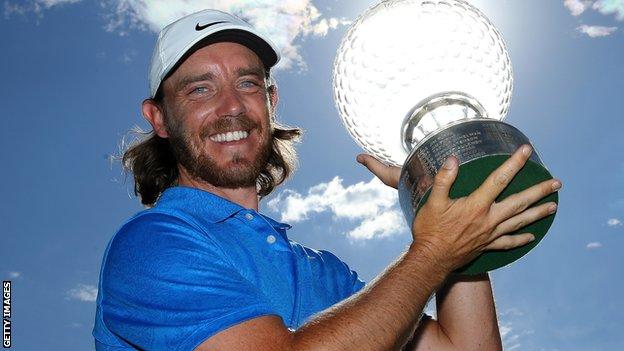 It creates an intriguing climax with Fleetwood leaping into second place in the Race behind Bernd Wiesberger after the Englishman's superb victory in South Africa last Sunday.

With all that money at stake, there is room for much volatility in the final standings. Rahm is third on the list, Lowry fourth, with Matt Fitzpatrick and Rory McIlroy lurking in fifth and sixth places.

Others who may have a say in the division of the end-of-season spoils include the English pair of Hatton and Matt Wallace.

The money is of secondary importance to MacIntyre, though, because a high finish this week would bring a bucketful of world ranking points, which could see him knock off his prime objective for the rest of the year.

"The ultimate goal is to try to get into the world's top 50 before Christmas," he says. "That would take care of everything for next year."

It would guarantee debut appearances at the Masters, US PGA and US Open.

This former shinty player has already shown he is ready to play on the biggest of golfing stages. He would dearly love to confirm that this week by becoming the European Tour's top newcomer in 2019.

Reid one off lead in LPGA event in Portland