Egypt were held to their second successive draw of the 2021 Africa Cup of Nations qualifying as hosts Comoros, with Jimmy Abdou as captain, battled to a 0-0 stalemate.

There were also draws as Cape Verde took on Mozambique, Kenya played Togo and The Gambia hosted DR Congo.

Ghana made it two wins out of two but were made to work hard to edge past Sao Tome e Principe 1-0.

After their 1-1 draw with Kenya on Thursday in their opening Group G encounter Egypt held on for another point on Monday in Comoros.

The Pharaohs, once again without the injured Mohamed Salah, began well with Mahmoud 'Kahraba' Abdel-Moneim firing a shot against the bar after nine minutes.

Two minutes later they had another good chance after the Comoros keeper was ruled to have picked up a back pass only for the resulting indirect freekick to be blocked and cleared by the hosts' defence.

Both sides had their best opportunities to break the deadlock midway through the second half.

Firstly Aston Villa's Trezeguet was put through for a one-on-one with the keeper only to stab his effort wide of the post.

Minutes later Kassim M'Dahoma jinxed his way into the area and his shot was blocked a little fortuitously by keeper Mohamed El Shenawy's shoulder as he dived to make the save.

The game was played in intensely hot conditions with the referee allowing official water breaks in both halves of the match.

It was also a stalemate in the other Group G game in Nairobi as Kenya and Togo drew 1-1.

Belgium-based Johanna Omolo gave the Harambee Stars the lead when he found himself in space outside the area in the 35th minute and his shot was hit with enough power to beat keeper Malcolm Barcola and fly in off the underside of the bar.

Togo's Hakim Ouro-Sama's headed home the equaliser from a corner in the 64th minute while his effort was powerful enough it was straight at keeper Ian Otieno who will be disappointed not to keep the ball out.

The result means Comoros are now top of the group on four points from their two matches, Egypt and Kenya are both on two while Togo now have one point.

The Gambia came from behind twice to earn a last-gasp 2-2 draw with visiting DR Congo in Group D.

Cedric Bakambu gave DR Congo the lead on the stroke of half-time as he turned the ball on after it had been headed back into the box following a corner.

Eight minutes after half-time the hosts were level as Bubacarr Trawally plays the ball wide Hamza Barry whose cross is headed in at eh near post by FZ Zurich's Pa Modou Jagne.

With 15 minutes left to play the Leopards took the lead once again as Jackson Muleka's long-range effort was deflected into the net.

Baboucarr Jobe ensured an unbeaten start to the group qualifiers for The Gambia in injury time as he cut inside and shot into the far corner a pass from Barry.

The Gambia managed the draw with without three key players as striker Assan Ceesay, who scored twice against Angola, was suspended for two yellow cards while Ajaccio's Ablie Jallow and Senegal-based Njine Njie Faye were injured. 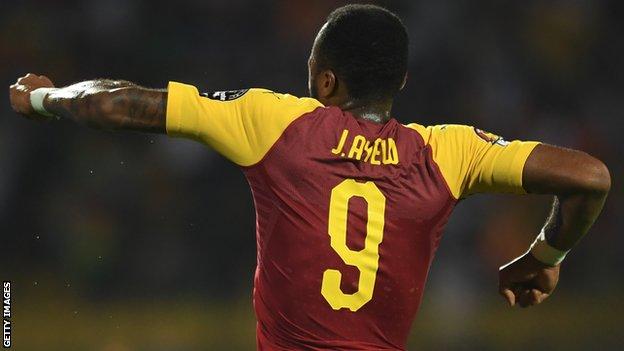 There was also an injury time goal for Mozambique as they drew 2-2 against hosts Cape Verde in Group F.

Garry Rodrigues scored the opener for Cape Verde after just six minutes following a neat one-two inside the area and then his weak shot somehow beat the keeper who will think he should have saved the ball.

Mozambique pulled level on 17 minutes when Edson Mexer pulled down a cross from the right and his powerful shot left Vozinha wrong-footed and flew into the net.

Cape Verde restored the lead before the hour mark when captain Ryan Mendes headed home across the keeper at the far post from a cross swung in from the right.

With time running down Portugal-based forward Witi stretched for a shot from 25 yards that skidded on the artificial turf evaded the keeper and ended up in the bottom corner of the hosts net.

Ghana scored a second-half penalty to edge past Sao Tome 1-0 and take them top of Group C.

The Black Stars struggled to break down a resolute Sao Tome defence until just after the break when Emmanuel Boateng was fouled in the area to allow Crystal Palace forward Jordan Ayew to score the winner.

The result means Ghana have the maximum six points from two games, South Africa and Sudan are on three while Sao Tome are pointless.

The many faces of Richard Foster

No problem giving up wages but players'

Who needs what in final games?
Next Item