Everton sack Marco Silva as manager after 18 months in charge

Silva says pressure has led to his players making mistakes

Everton have sacked manager Marco Silva after 18 months, with the club in the Premier League relegation zone after their Merseyside derby humiliation.

Wednesday's 5-2 defeat by Liverpool at Anfield was their ninth of the season and leaves them 18th in the Premier League after three successive losses.

Shanghai SIPG boss Vitor Pereira is a contender to succeed Silva, while David Moyes' return can not be ruled out.

Former striker Duncan Ferguson has been put in temporary charge and will manage the side against Chelsea on Saturday.

The club said they aim to appoint a new manager "as swiftly as possible".

Everton are now searching for their fourth permanent boss since Roberto Martinez was sacked in May 2016.

Former Everton manager Moyes has been considered as a potential interim successor, but the suggestion has sparked a largely negative reaction from supporters and it remains to be seen whether majority shareholder Farhad Moshiri and his boardroom colleagues ignore that and invite the 56-year-old Scot to return.

Moyes spent 11 years as Everton manager, and his return has been seen by fans as a retrograde step given his lack of success since leaving for Manchester United in 2013.

He was sacked at United and Real Socieded and was in charge of Sunderland when they were relegated from the Premier League before having a short spell at West Ham.

It has been suggested that if Moyes does return he could bring another Everton old boy, Tim Cahill, back as his assistant.

Portuguese Pereira, 51, won two league titles with Porto, the league and cup double with Olympiakos and the Chinese Super League with Shanghai. 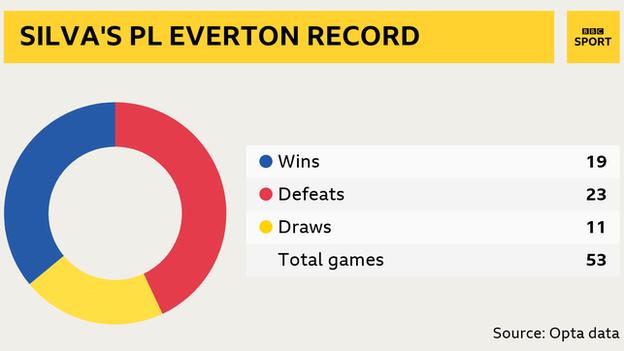 Portuguese Silva, 42, is the fifth managerial dismissal in the Premier League this season, after the departures of Javi Gracia - who had replaced Silva at Vicarage Road - and Quique Sanchez Flores from Watford, as well as Tottenham's Mauricio Pochettino and Arsenal's Unai Emery.

Former Hull City boss Silva succeeded Sam Allardyce at Goodison Park. He was brought in with the hope hewould get Everton to play more attractive football and was backed with almost £90m of signings in the summer of 2018.

Everton finished eighth in Silva's first campaign but, after spending more than £100m on players in the summer, they have won just four league games this season.

The Toffees face a tricky run of league fixtures over the next month when they play Chelsea, Manchester United, Arsenal and Manchester City, and also Leicester in the Carabao Cup quarter-finals.

After Martinez was dismissed in 2016, Ronald Koeman led Everton into the Europa League in his first season in charge, but was sacked when the club fell into the relegation zone following a poor start to his second campaign.

David Unsworth then lost five of eight games as interim boss, while Allardyce made way following an eighth-place finish after fans frequently expressed their displeasure at the lack of attacking flair under the former England coach.

Not so Silva linings...

Silva has now had three jobs in English football that have all ultimately ended in failure and been characterised by promising starts followed by steep declines.

In his four months in charge of Hull, his side accumulated 17 points from his first 11 games - but only four from the next seven as they were relegated from the Premier League.

Two days after leaving the Tigers, Silva joined Watford in May 2017 and took the team into the top four during his first few months in charge.

His side took 21 points from 13 games but the Hornets only won once in his next 11 matches, before Silva was sacked in January 2018.

Some of this was attributed by the Vicarage Road hierarchy to Everton's approach for Silva the previous November - before hiring Allardyce.

Watford fiercely resisted the Toffees' unwanted advances and complained to the Premier League with a demand for compensation.

He was eventually appointed Everton boss in May 2018 and won 22 points from his first 13 league games in charge, but has only taken 42 points from the following 38 matches.

Before his time in England, Silva guided Estoril into the Portuguese top flight and they qualified for the Europa League the following season.

In one season at Sporting Lisbon he won the Portuguese Cup, and in his year at Olympiakos, who he also managed in the Champions League, he took them to the Greek league title.

Everton fans will ask why the club can't go for Mauricio Pochettino, but the honest answer is he just wouldn't be interested.

I know Eddie Howe is of interest to the Everton board but getting him mid-season might be difficult.

I don't know how David Moyes going back would work, because he was in control of everything when he was there last time.

That wouldn't be the case now with director of football Marcel Brands.