If Watford's players were under any misapprehension as to what manager Nigel Pearson was all about, it was dispelled at half-time during his first game in charge.

The Hornets had held Premier League leaders Liverpool for 38 minutes before falling behind; they entered the away dressing room feeling they had acquitted themselves well - at least by their own recent dire standards.

As goalkeeper Ben Foster recalls, the new boss tore into one player, "sticking a rocket up him like you wouldn't believe".

There was no sulking from the players, though, no lasting bitterness or resentment - just acceptance. Watford would concede again and lose 2-0 on that mid-December afternoon.

The result left them six points adrift at the bottom of the table, but Pearson had made his point. They have not lost since.

Watford had won one of 16 games this season under two managers - Javi Gracia and his replacement Quique Sanchez Flores -before Pearson took charge, claiming a paltry nine points from a possible 48. Under Pearson, they have taken 13 from 18.

They have beaten Manchester United and Wolves, and secured 3-0 victories over relegation rivals Aston Villa and Bournemouth.

Most importantly, they are now one point above the bottom three, less than a month after their Premier League obituary was being drafted. No wonder their fans sang the theme tune to The Great Escape after the New Year's Day win over Wolves.

Listen to any Watford player speak about the changes their new boss has made and it sounds simple - discipline, clarity, respect. But that is precisely the point. Pearson's message is a simple one; clear, laser-focused and all the more powerful for it.

First, he has challenged the ill-discipline that had crept into the club.

"Sometimes you need to treat footballers like school children and be harsh with them," Foster tells BBC Sport.

"The difference between the previous two managers and Nigel... they were coaches but this club has been calling out for a manager. Nigel is a manager and takes complete control - timings, logistics, everything.

"Off the field, things started to creep in - sloppy things - and it gets worse and worse. It's like a bacteria.

"The current manager has pulled everybody together. He makes an example of you if you do something wrong, so everybody thinks: 'I'm not going to be that guy next time.'

"When he gets you in a room, he holds the room and everybody stops talking straight away." 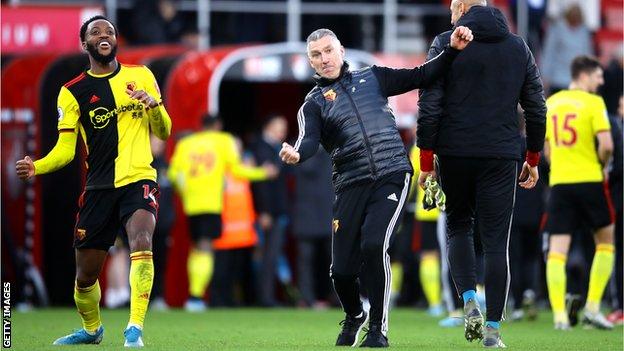 Instead of balking at such fierce enforcement, Watford's players have embraced it.

"If you don't buy into what the gaffer wants, you won't be here," explains club captain Troy Deeney, whose recent return to the club's attack after injury could not have been better timed for the Pearson revolution.

"He has hammered me a few times but he has been brilliant with me. For the first time in eight years, I have been treated like a proper man.

"When you are captain, you do as you are told. If you are treated like a man and with respect, then you reciprocate that."

Pearson is more than just a strict disciplinarian, though. He is also an emotionally intelligent, shrewd man manager capable of assessing the needs of his squad - especially in the short-term, when points have been paramount - and tailoring his approach accordingly.

On his second day in the job, he visited every department at the club to introduce himself, with club employees noticing warm, human qualities in him similar to those that made the late Graham Taylor such a popular figure at Vicarage Road.

"His people skills are brilliant. He can talk to people and gets to know everyone around the training ground," says Foster. "He is just doing laps around the place keeping tabs on everybody.

"In training, it's different sessions. We've had Spanish coaches, so it's going to be different. Nigel's way of doing it is that you give everything for those sessions. Shorter sessions - but more intense."

Deeney adds: "His man-management is massively underrated. His technical team, too. You've got him, Shakey [Craig Shakespeare] as well - but then also he's implemented Hayden Mullins and Stacky [Graham Stack], who have got bags of experience."

A testament to Pearson's ability to manage his players came in the 3-0 win over Villa at the end of December, in which he substituted Nathaniel Chalobah 15 minutes after he had come on at half-time, following Adrian Mariappa's red card.

Foster says: "He brought him off and everyone was like: 'That's not nice.' But the first thing he [Pearson] said was: 'I have to apologise to Nat. I had to do it for the team.'

"Nat was gutted [at going off] and close to tears, but he made a point of saying that in front of everybody, and Nat can respect that and he has come back from it." 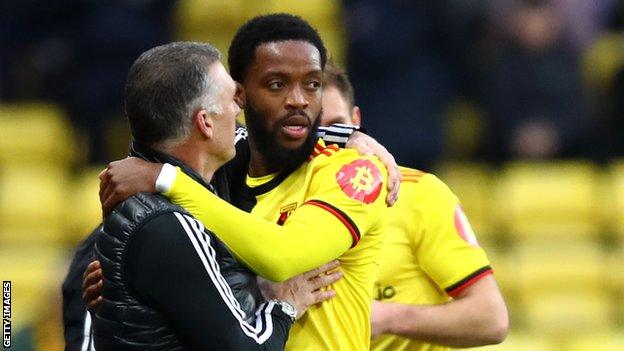 Improvements off the pitch can help, but it is what is done on it that matters most, and Pearson has made essential changes to Watford's tactical approach that are reaping significant reward.

The psychological impact and motivation of a new, determined manager helps. Defender Craig Dawson told the club's official website: "The thing that has changed totally: the work rate. Everyone is working hard for each other.

"If someone is slightly out of position, the person next to them is helping them out. You can see that throughout the pitch. Everyone has got each other's backs."

The Hornets are also more settled and structured, with Pearson largely consistent in his selection and relying on a back four in front of Foster - one of the division's best keepers - as opposed to the three or five favoured by Flores.

As forward Gerard Deulofeu attests: "We are really organised on and off the pitch, like how we play with a high press all together. We defend with a good shape, creating chances on the wings too. It is tough to beat us."

There have been more sophisticated alterations too, designed to get more goals from a side possessing comfortably the division's worst shot conversion rate (6.98%) in the 16 games prior to Pearson taking charge.

Chief among them is freeing Abdoulaye Doucoure from an anchor role in midfield to impact the game at both ends in a box-to-box capacity.

"I used to play in this position when I was in France," Doucoure told watfordfc.com. "I will play wherever but I'm pleased with this position as I can get forward and also get back to protect the midfield."

The 27-year-old has two goals and an assist in his past two games, having contributed one solitary strike prior to that. 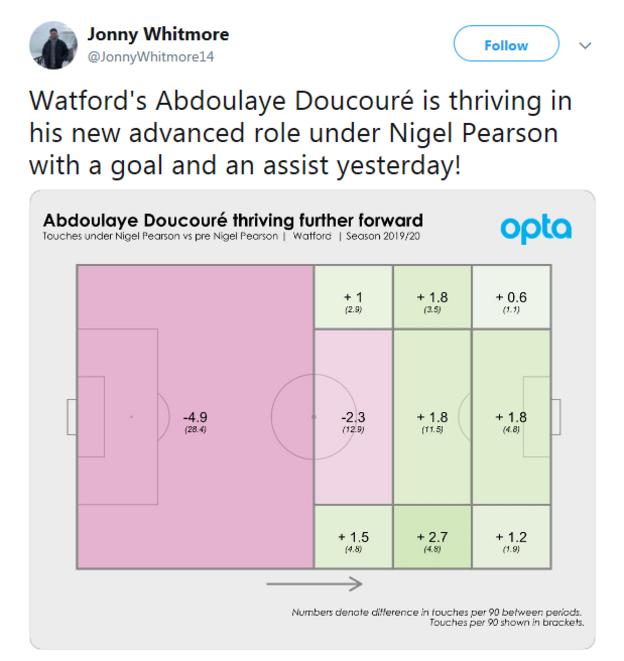 As Opta point out, Doucoure has made notably more touches in the opposition half under Pearson than before the manager's arrival at Watford

Pearson is also getting the best out of Deulofeu and club record summer signing Ismaila Sarr - both quick, skilful wingers capable of giving opposition full-backs a torrid time.

Watford are not out of danger yet. And nobody knows this better than Pearson, who was in charge of Leicester when, in 2014-15, they became just the third side to escape relegation from the Premier League having been bottom at Christmas.

They also now have the challenge of navigating what could be four games in nine days later this month, after their FA Cup third-round replay against Tranmere was postponed on Tuesday.

There is a lot more work to be done if the Hornets are to achieve their great escape, but they have at least now broken ground and begun tunnelling out of trouble.

'As bad as I've felt as Bristol City boss'

The Bayern star born in a refugee camp

How Jordan has grown into the midfielder
Next Item