Rafael Nadal has reached the Australian Open final five times but won only once, in 2009

World number one Rafael Nadal cruised into the Australian Open second round with a straightforward victory over Bolivia's Hugo Dellien in Melbourne.

He will play either Federico Delbonis of Argentina or Portugal's Joao Sousa next.

Nadal has reached the Australian Open final five times but won it only once, beating Federer in a five-set epic 11 years ago.

He dropped serve twice against Dellien but barely looked troubled, hitting 38 winners to his opponent's 15.

"For me personally it has been a very positive start," the 33-year-old said.

"What you want is to win in the first round and, if you can do it in straight sets, even better." 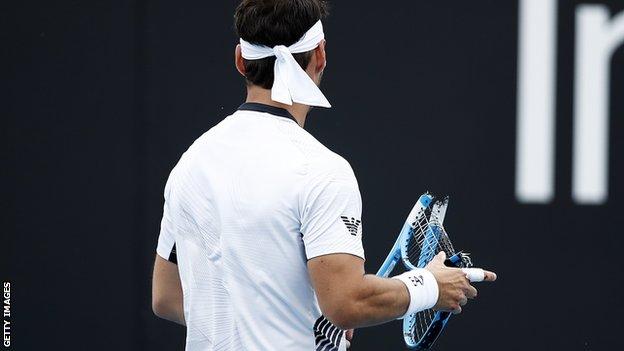 Italian 12th seed Fabio Fognini fought back from a two-set deficit to beat American Reilly Opelka in a bad-tempered match.

Opelka, who had earlier been given a code violation for time-wasting, shouted at the umpire when he felt Fognini should have been penalised for the same thing.

Fognini had earlier sworn at the umpire in Italian and broken a racquet.

After Fognini threw his racquet, Opelka approached Carlos Bernardes and said: "Let me ask you something, real quick. You're pathetic.

"You give me one warning after one throw. He's thrown his three or four times, bro."

"You don't want to engage with a guy like that," Opelka said of Fognini after the match.

"You want to keep him out of the match as much as possible. It's definitely not a positive thing." 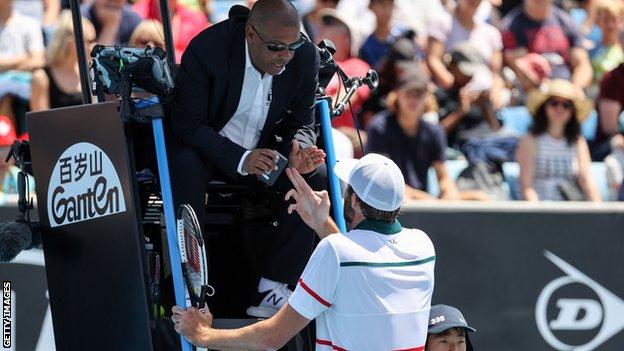 Russian 14th seed Karen Khachanov fought back from a first-set deficit to advance, while Russia's Andrey Rublev, who has won two titles this year, also won.

There was disappointment for former world number five Jo-Wilfried Tsonga, who had to retire from his match against 20-year-old Australian Alexei Popyrin with a back injury.

"When he made the final here [in 2008] I was in my living room jumping around like a crazy kid."

Olympic hopeful Wahid out of qualifiers

Tetteh, others advance to quarters of Olympic

Sharapova unsure over future after exit
Previous Item
NEXT