Britain's Heather Watson showed tremendous fight to reach the Australian Open second round before Dan Evans missed out on the chance of a potential meeting with Novak Djokovic.

Watson and Harriet Dart are the only remaining Britons in the singles draws.

Watson will meet Belgian 16th seed Elise Mertens for the second time in a week after winning their Hobart International quarter-final last Thursday.

Watson weathers the wind to win

After beating Pliskova, Watson said having played in similar conditions in Hobart last week - and growing up in windy Guernsey - had stood her in good stead.

"It was super windy today but I felt prepared because it was like that in Hobart a lot of the days," the 27-year-old said.

"But being a first-round match and being postponed I felt a bit nervous in that first set and a bit tense.

"I managed to loosen up, relax and enjoy the match."

Mertens beat Montenegro's Danka Kovinic later on Wednesday as, like Watson, she had to come back a day later as a consequence of the backlog of matches caused by Monday's rain washout.

Watson has not enjoyed many victories in the Grand Slams recently, showing her pleasure at digging in and beating 65th-ranked Pliskova with a wide smile and tight clenched fist towards her box.

The Briton had won only one match in her last six appearances in the main draw in Melbourne but had come here in good form after her Hobart performances.

In difficult conditions in which both players struggled at times with their ball toss, Watson eventually dealt with them better as Pliskova - twin sister of second seed Karolina - began to show her frustration.

Watson's service game improved as the match wore on and she continued to hit a steady stream of winners to to clinch an impressive victory.

"I don't mind the wind and with the way I play - a lot of slice, drops shots, change-of-pace balls - I think it works well. And I'm patient," she said. 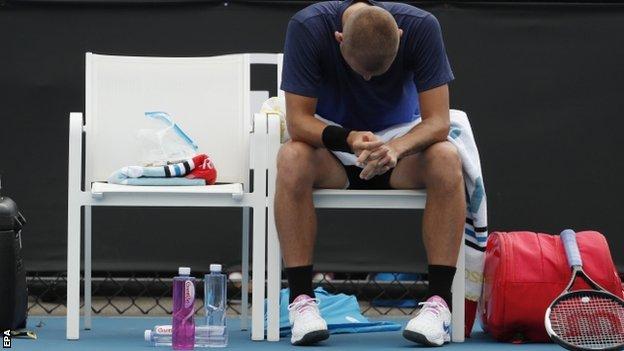 British number one Evans needed to fight back from two sets down in his opening match against American Mackenzie McDonald, but there was no sign of another memorable comeback against an inspired Nishioka.

Evans, 29, said he did not "feel good at all" going into Monday's match, possibly the effects of his heroics for Great Britain at the ATP Cup and playing in Adelaide last week.

Two days later he again looked out-of-sorts and this time he was unable to put any pressure on his opponent.

"I've not had the ranking to skip weeks, but maybe in hindsight I could not have played last week," Evans said.

"It's been a long few weeks since pre-season. I've been away a long time and I didn't feel great."

Evans, who was competing in his first Grand Slam as a seeded player, could not force a single break point as 71st-ranked Nishioka eased into a two-set lead.

The Briton looked to be struggling physically as he sat in his chair at the end of the second set, although he recovered to push Nishioka, who made only two unforced errors in the previous set, closer in the third.

However, he was broken in his penultimate service game as a tie-break loomed, unable to land a first serve before hitting a forehand wide of the line on Nishioka's first match point.

The 24-year-old Japanese fell to his knees on the court and looked up to the sky in celebration as contemplated his achievement of reaching the third round of a Grand Slam for the first time.

His reward is a meeting with Serbian defending champion Djokovic, who beat Nishioka's compatriot Tatsuma Ito 6-1 6-4 6-2.

Evans was the third and final Briton to fall in the men's singles after Kyle Edmund and Cameron Norrie lost their opening matches on Tuesday.

Dan Evans was the first to admit that Yoshihito Nishioka handled the windy conditions better than he did.

But having confessed to feeling sore in his first-round victory over Mackenzie McDonald, it's clear Evans' success at the ATP Cup and in Adelaide earlier this month did come at a price.

As he said - in typical Evans style - he was at a bit of a loose end last week, and so couldn't resist a trip to Adelaide, where he reached the quarter-finals.

Evans says he has no regrets, but hinted he will make a few changes to his schedule so he can arrive at the big events feeling fresher in future.

The men's doubles got under way on day three with two British players involved.

Jonny O'Mara progressed to the second round alongside partner Marcelo Arevalo, from El Salvador, with a 6-3 6-2 win over Bolivian Hugo Dellien and Argentine Juan Ignacio Londero.

However, Dom Inglot and Saudi Arabia's Aisam-Ul-Haq Qureshi were knocked out in the opening round, losing in three sets to Jean-Julien Rojer and Horia Tecau.

In-form Williams advances to third round
Next Item