Arsenal 'togetherness and leadership' key to draw at Chelsea - Arteta

Arsenal showed the "togetherness and leadership" that Mikel Arteta is demanding as they overcame David Luiz's red card to twice fight back and share the spoils in an eventful London derby.

Luiz was sent off against his former club for shoving Tammy Abraham in the penalty area as the Chelsea striker looked set to score following a terrible backpass by Shkodran Mustafi when the game was goalless.

Jorginho scored from the resulting spot-kick before 18-year-old Gabriel Martinelli scored a brilliant equaliser after a slip by N'Golo Kante only for Cesar Azpilicueta to restore Chelsea's lead late on.

Yet 10-man Arsenal capped a spirited display when Hector Bellerin marked his return from injury with a dramatic equaliser from the edge of the penalty area.

"I wasn't here a few weeks ago but what I am demanding every day they are trying their best to do it. The togetherness and leadership they showed today, this is what I wanted to see.

"We are going in the right direction but I think tonight is a special night for everybody."

Arsenal remain 10 points off a Champions League spot and, despite this battling performance, they have won just one of their last eight Premier League games. They also face the prospect of finishing outside the top six for the first time since 1994-95.

In addition, Arteta remains without an away win since taking charge in December yet he witnessed a gutsy response from his side, who played better with 10 men than they did with 11.

Luiz, who has given away three penalties in the Premier League this season - more than any other player - was left with little choice after Mustafi's under-hit pass let in Abraham.

Mustafi made up for his error with a clearance from a Chelsea corner which allowed Martinelli to burst forward and, after Kante's slip in the centre circle, produce a sublime finish under Kepa Arrizabalaga.

Chelsea looked like they had secured a first top-flight double over their London neighbours in four years when Azpilicueta restored their lead in the closing minutes but Arteta's side were not done.

Having dropped 13 points from winning positions in the Premier League this season, they showed a determination that has been missing and, with just their second shot of the game, Bellerin rifled in an equaliser to seal a fourth successive away league draw.

"A lot of people say we have no character in the team. We showed in this game we have."

This result will feel like a defeat for Frank Lampard and his Chelsea players.

Even before Luiz's dismissal and Jorginho's goal from the spot, the Blues dominated and should have been ahead after a hesitant start by the Gunners.

Having lost to a 93rd-minute goal at Newcastle on Saturday, Chelsea came flying out of the blocks.

Andreas Christensen headed wide from a corner when the Denmark defender should have done better while Abraham was six yards out when he nodded another early chance straight at Leno.

Callum Hudson-Odoi hit the top of the bar with a looping cross before Chelsea - who forced 17 corners and peppered Arsenal's goal with 19 shots - eventually took the lead.

Yet Chelsea have managed just three clean sheets in the last 15 league and cup games and their failure to take their chances came back to haunt them.

On a disappointing night for the hosts, Abraham had to be helped off the pitch at full-time after colliding with an advertising board in the closing moments of the game. 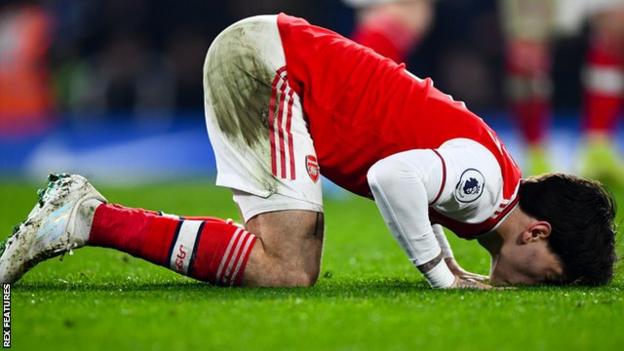 Both teams are in FA Cup fourth-round action next with Chelsea travelling to Championship Hull City on Saturday (17:30 GMT), while Arsenal are at Bournemouth on Monday (20:00).