Dean Henderson has played in every Premier League game this season, apart from against parent club Manchester United

Seconds after Dean Henderson denied Gabriel Jesus from the penalty spot on Tuesday night, three sides of Bramall Lane burst into one chant.

Manchester City may have gone on to beat Sheffield United 1-0 thanks to a second-half strike by Sergio Aguero, but Henderson - on a season-long loan from Manchester United - played a significant part in ensuring the Blades were still level heading into the final 20 minutes.

The 22-year-old, who was on Carlisle's books before moving to Old Trafford at the age of 14, had also made impressive saves from Raheem Sterling and Nicolas Otamendi and, in the end, he was unfortunate not to finish with a clean sheet.

His overall performance, however, will have served only to boost his chances of being included in Gareth Southgate's England squad for this summer's European Championship.

From Liverpool howler to steady as a rock

Just as impressive as Sheffield United's unexpected form this season has been the rise of Henderson from Premier League rookie to a realistic contender for the England number one spot.

But his development has not come without a few bumps in the road.

A significant moment came in September against Liverpool. The Blades were on course for a hard-fought and unexpected draw against the Premier League leaders until Henderson let a tame Georginio Wijnaldum effort slip through his legs for the only goal of the game.

When asked by BBC Sport on Tuesday if that moment helped Henderson grow into the player he is now, Wilder said: "To chuck one in against Liverpool live on TV and come on as he has says a lot about his character.

"Sometimes you have to go through a bit of pain, which he did on that day.

"He has been outstanding for me since I have been here. He has not been error free but he does show ability to move on and learn and also shows mental strength."

Henderson may not have managed a clean sheet on Tuesday but he has kept the joint most in the Premier League with eight - alongside Leicester's Kasper Schmeichel and Ben Foster of Watford.

His development has not surprised Wilder. The only surprise for the Blades boss is that he is not yet being considered a genuine England number one contender.

"There is a bit of a pecking order but they must be really good goalkeepers getting in ahead of him," he said.

And speaking to BBC Radio 5 Live, he added: "If there is a better goalkeeper in the world at the moment I have not seen one. He has got a fabulous future. It was a big night for him and a big night for us as a football club." 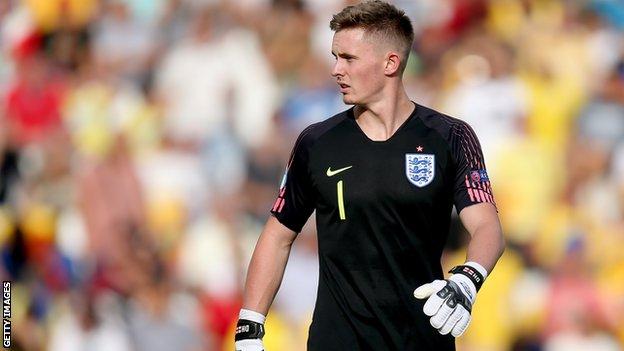 How does he compare with England's other options?

Jordan Pickford has been England's first-choice goalkeeper for a little over two years, with the Everton shot stopper enjoying a superb World Cup in 2018 as he helped the Three Lions reach the semi-finals.

However, his form heading into this summer's tournament has been mixed. Questions were raised as far back as March last year over whether his place in England's starting XI was under threat due to a number of poor performances for the Toffees, which continued into the start of this season.

He has let in 35 goals in 24 appearances this season, keeping six clean sheets.

In contrast, Henderson has let in just 20 in 23 games.

The Clarets are a side often praised for their disciplined defence but they have endured a testing season and, until Sunday's 2-1 win against Leicester, were flirting precariously with the relegation places.

Purely in terms of goals conceded, Henderson comes out on top against both Pickford and Pope but the Everton man is favoured by Southgate in part because of his passing ability - and that is an area where it appears Henderson is falling short.

Aston Villa's Tom Heaton, another possible contender, is out for the remainder of the season through injury and unlikely to be fit for consideration for Euro 2020 while Foster - the only other English goalkeeper to keep as many clean sheets in the Premier League this season as Henderson - has not featured for the international team in seven years.

Henderson was called up for England's final batch of Euro 2020 qualifiers in October last year, replacing the injured Heaton.

However, he is yet to make his first senior appearance for the Three Lions as he was named among the substitutes for games against Czech Republic, Bulgaria, Montenegro and Kosovo. 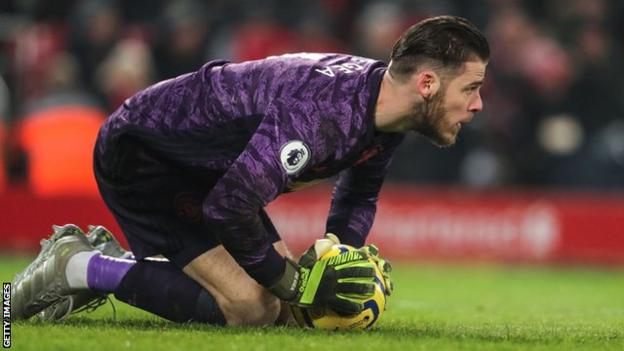 Henderson's form is not only good news for England but potentially also for Manchester United.

Compared to David de Gea, the youngster boasts a better save percentage this season - 74.68% compared to 60.32%, but once again his passing accuracy lets him down, with De Gea's standing at 72.46.

He might, though, be considered a strong back-up option with the long-term aim of taking over from the Spanish keeper.

However, Wilder is hopeful the young keeper who has developed so well under his tutelage may consider remaining at Sheffield United beyond this season.

"I believe he wants to play first-team football and I am not sure he will want to play back-up to anyone," Wilder said.

"If he was to come here to us for another year we would take that up and we are already talking with Manchester United about that."

Fury destroys Wilder and offers him a rematch

Chambers has had his contract terminated

Hearts cruise into Round of 32

Returning Laporte is 'best in the world'
Previous Item
NEXT