The Confederation of African Football (Caf) has invited Libya to take part in the upcoming African Nations Championship (CHAN) finals in Cameroon.

Caf are looking for a team to replace Tunisia, who have withdrawn from the tournament for locally-based players because clubs were reluctant to release their players.

Tunisia beat 2014 CHAN champions, Libya, 3-1, on aggregate to clinch a place in the finals that are due to kick off in April.

"The Libya Football Federation's board of directors will study the situation and send a response in due course," LFF member Younes El Kaza told BBC Sport.

Caf have asked for a response by 28 January.

The Tunisian Football Federation (FTF) with drew after consulting with local clubs, who did not want to release players in the middle of a league season.

According to the FTF the clubs voted in favour of withdrawing from the competition because of the high pace of the Tunisian league and its tight schedule.

The clubs point out that the CHAN is not on Fifa's official match calendar and that they want to protect the health and wellbeing of players. 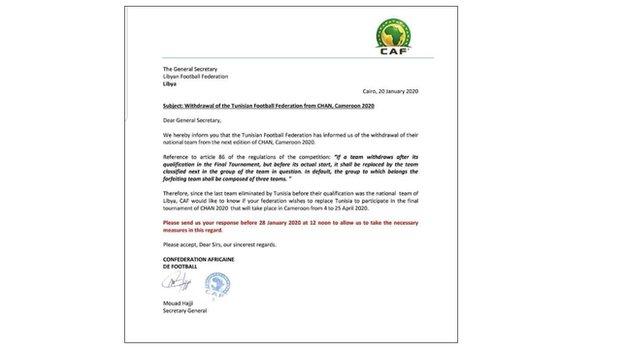 World Invitational will not take place